The Tiny Taster
This was an article I wrote a few months ago for Parsi Times. I wanted to share this on my blog because it was one of the best interviews I have ever had. Such down to earth warm honest hardworking people and I had the pleasure of meeting them. Hope you enjoy this as much as I did writing it.

One of my favourite games is word association.. The first thing that comes to mind is what is most common or obvious. So let’s try this. Someone said Pune and automatically I said Biscuits! But of course!! Pune is known as the biscuit city, because its home to some of the best bakeries. And even if you have never been to Pune or never eaten their biscuits you still know that the undisputed heavy weight champion of the biscuit world is none other than Kayani Bakery.


This humble little bakery that has been dishing out its delectable treats since 1955 is this town’s pride and glory. There are tales of how people wait and jostle through the crowds’ desperately trying to get to the counter so they can buy their goodies. I’m one of these troopers who has lived to tell the tale. Fed up of battling the crowds I have wisened up and I leave it to the seasoned professionals. I just get one of my friends in the city to buy my stuff for me while I patiently wait outside. 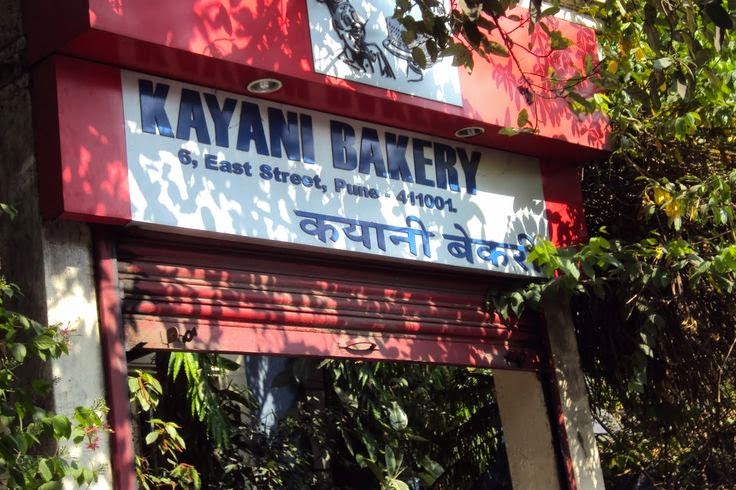 What baffles me is that the bakery opens at 7am till 1pm and then again its open from 3.30pm till 7pm and at any given point there is a crowd. How?? What on earth is the secret to their popularity? I consider myself extremely lucky because an avid reader of Parsi Times introduced me to a family member Arzoo Irani who graciously invited me to the Bakery to meet up with the boys who run this operation.

Kayani Bakery was opened in August of 1955 by three brothers Khodayar, Hormazdiar and Rustom, immigrants from Iran who worked as waiters to earn a living. Originally there was an Italian restaurant which use to be next to the bakery and the property where the bakery itself is was actually part of the restaurant and was their dance floor. In fact the flooring is the original marble flooring used for the restaurants dance floor and the ceiling as well, which is brass has been left as it was. In those days except for the Victory theatre across there was nothing as it was jungle land.

I’m excited to visit the bakery and once I get there, I’m taken behind the counter and given a quick private tour of the bakery. As I make my way through the crowd and get behind the counter I can see a dozen curious and even envious faces. I don’t blame them, if I was standing in line patiently waiting my turn and I see someone who’s allowed behind the counter I’d be green with envy. I’m thrilled as one of the owners Parvez Kayani takes me backstage.

As soon as I step into the bakery I feel like I’m in confectionary wonderland. There are hundreds of different types of biscuits and cakes being churned out. My fingers are itching to take pictures but they don’t allow it and who can blame them? You don’t want anyone taking pictures of how and where the magic is baked. I feel like I’m behind the scenes of Willy Wonkas chocolate factory only with cakes and biscuits instead of chocolate! I just try to take a mental snap shot of everything and saviour the moment. Apart from the treat my eyes are getting with this never end line of goodies, the wonderful smell that has literally hit all my senses! The one thing that really stands out is that their kitchen and work stations are immaculately clean!  One would expect bakers hard at work with their benches messy with eggs splattered here n there and butter smeared on a table edge and clouds of flour all over the place. This was the cleanest kitchen I have ever been to.  I’m told that it’s a conscious effort on their part to maintain cleanliness. Kayani takes this very seriously and ensures that each worker at the end of his shift when he reports has to have his area clean and things in order of so the next person can take over easily. Due to the large volumes they cater to the bakery is operational 24hrs a day and in such case being clean takes precedence or else the flow in which it operates gets hampered and quality suffers.
The bakery has an extensive menu and makes almost everything, from cakes, pastries, biscuits, mawa cakes, khari biscuit and everyone has their own favourites. However, the hottest selling item on their vast menu is the popular shrewsbury biscuit. Not very often does a customer come to Kayani and not walk out with his shrewsbury stash. I’m told they make an average of 220 – 240 kilos of shrewsbury biscuits in a single day! Sometimes even more if there is a demand. During November – December their Christmas cakes become popular so the shrewsbury demand drops a little but no matter how hard they try they can’t seem to match the demand. One of the owners Pervez laughs and tells me that sometimes people call on the phone asking if the biscuits are fresh and he has to tell them they were but now they’re all sold out!

I ask them if they have any future plans for growth, expansion or possibly even a second outlet. Rustom Kayani who is behind the counter frantically attending to customers while he’s nice enough to talk me through the Kayani Legacy says they have no wish to open any other outlet anywhere not even in Pune its self. They do however want to expand but will do so within their existing space. They will just optimise their space. He says that any expansion that might happen will only happen within these walls. These were words used by his grandfather which he still lives by.

The humble bakery started by three brothers six decades ago has now flourished into a massive house hold name. Today it’s still a family run business. There are 5 of them that run the show but I wonder who is in charge. Rustom tells me that the success of Kayani lies in the fact that there is no single person in charge but all five owners putting in their effort. He stresses that it is a team effort; each partner is a crucial pillar to this structure and brings something to the table. I ask if it’s easy to work with family as I would imagine it can get difficult. Rustom admits that they squabble all the time, which family doesn’t? But it’s always small petty things that are forgotten in ten minutes. Everyone is respectful of each other and will listen to advice. It’s very important that each partner is a working partner. They do not believe in silent partners which is why at almost any given time you will see all five partners at the shop. Whether it’s behind the counter taking orders, sitting at the cash register doling out the money or behind in the kitchen baking up a storm. They are all extremely hands on, which is a pleasure to see. Unfortunately this is also why you won’t find any women working at Kayani. It’s been like that from the beginning because a woman will marry and eventually be busy with her family and won’t be able to give her time to the bakery. Or so that is what was believed by the original owners and a tradition they continue. Sadly this year one of their partners, a well known and much loved Firdaus Kayani passed away in a tragic accident.
It’s such a pleasure to meet humble down to earth people who in all probability don’t even realise how integral they are to the city’s identity, and even if they do it’s not important to them. The family is extremely media shy and very private. They are not interested in any press coverage or fan fare. I consider myself extremely lucky to spend the morning chatting with the jovial bunch and having them open up their kitchen to me and allow me to have a peek into the world of beautiful biscuits. Of all the interviews and food reviews I have done, this one will always be special. I was left with a warm fuzzy happy feeling after this meeting. Food is known the make me happy and cakes and biscuits will guarantee that happy feeling but in this case I think I’m happy because of the warmth this family has shown. With their dedication to their bakery and their single minded dedication to churn out the best biscuits you’ll probably ever taste.

7 Things To Eat In Hyderabad

5 Reasons Why You Should Visit Nepal