The Tiny Taster
I’ve had a few meals at Hakkasan in Bandra and have quite enjoyed all of them. My initiation to Hakkasan was through one of these ‘ All you can eat’ dim sum menu and believe me I ate all I could! Since then I’ve enjoyed full meals and have successfully skipped the following meal because I’ve over indulged at Hakkasan. (This was one such time) Like every Chinese restaurant in the city Hakkasan is celebrating the Year Of the Horse and has curated a special menu for the occasion. This menu consists of items you won’t find on the main menu so it is indeed special.  This menu is from the 27th to the 1st of February but I do hope they extend it or incorporate it in their main menu at some point.
The starters were my favourite course and we started it with a salad they were eager for me to try which is simple enough with finely shredded veggies, 5 spice powder sprinkled on top , plum sauce added and then lightly tossed ( all done by the server at your table) and I’m told it’s traditionally tossed and the Chinese say ” Wan Shi Ru Yi ”  which is a happy new year greeting that translates into ” may all your wishes be fulfilled. Well Wan Shi Ru Yi to you my hungry readers, this was a lovely light salad. It’s very simple in terms of ingredients and flavour but it’s the sort of flavour that appeals to me. Since I do like my food with a slight spice kick I drizzled some chili oil and chowed down. 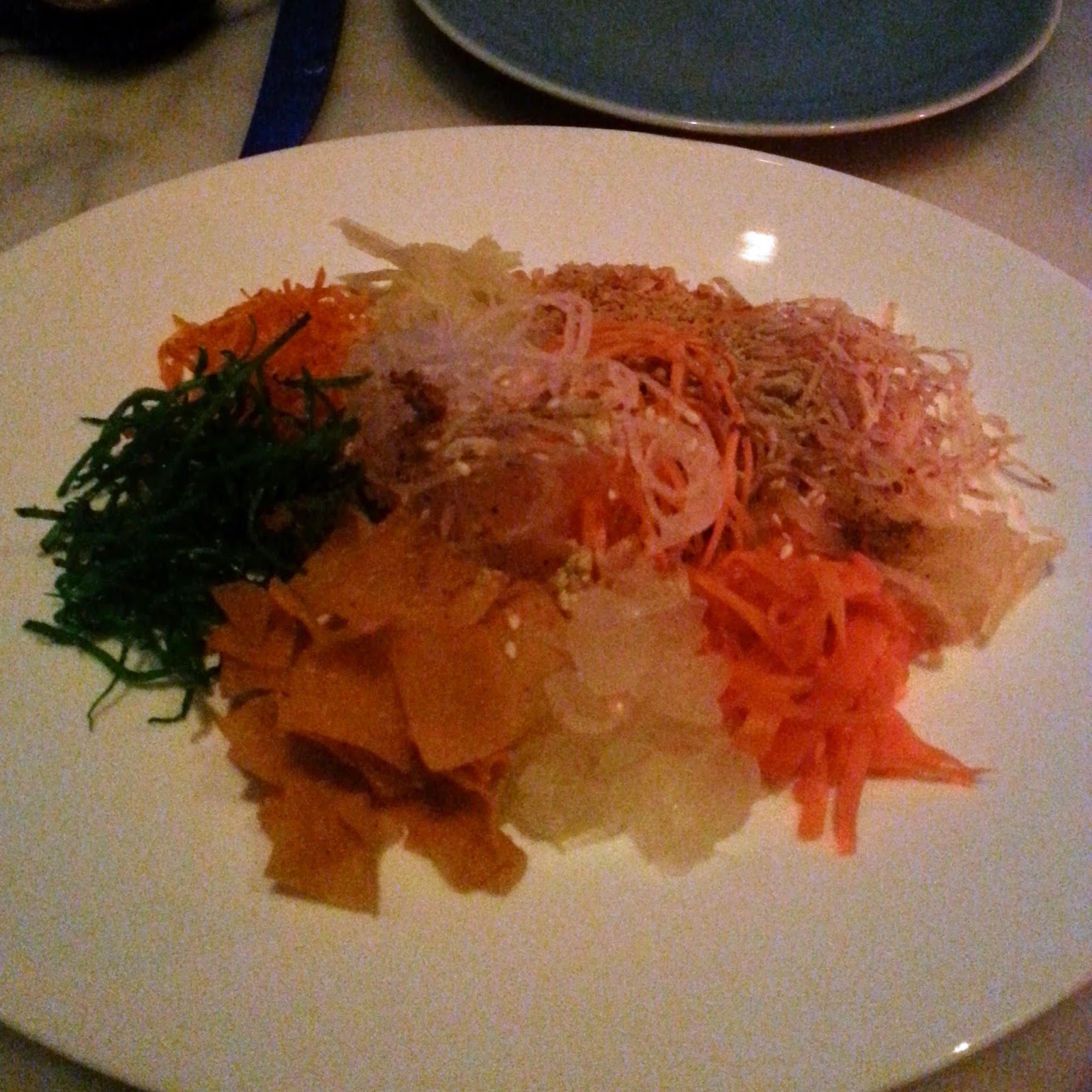 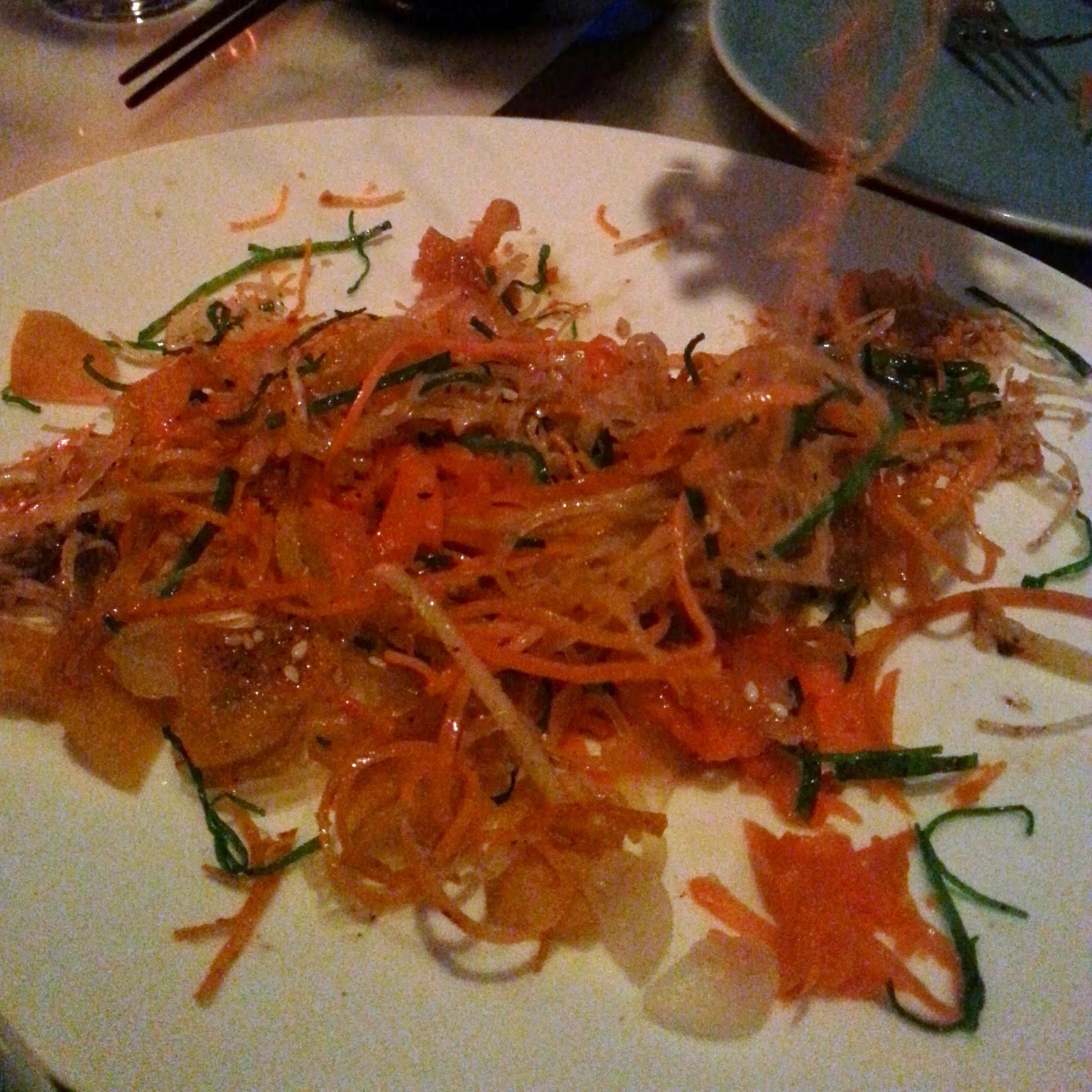 The prawn and water chestnut rolls are oily but crisp and yum. Let’s face it, you really can’t go wrong with prawn n water chestnut. Like most of the dimsum and other Chinese dishes it’s best paired with the chilli sauce they serve or the dipping sauce it comes with. I love dipping sauces, I think they elevate a dish completely. 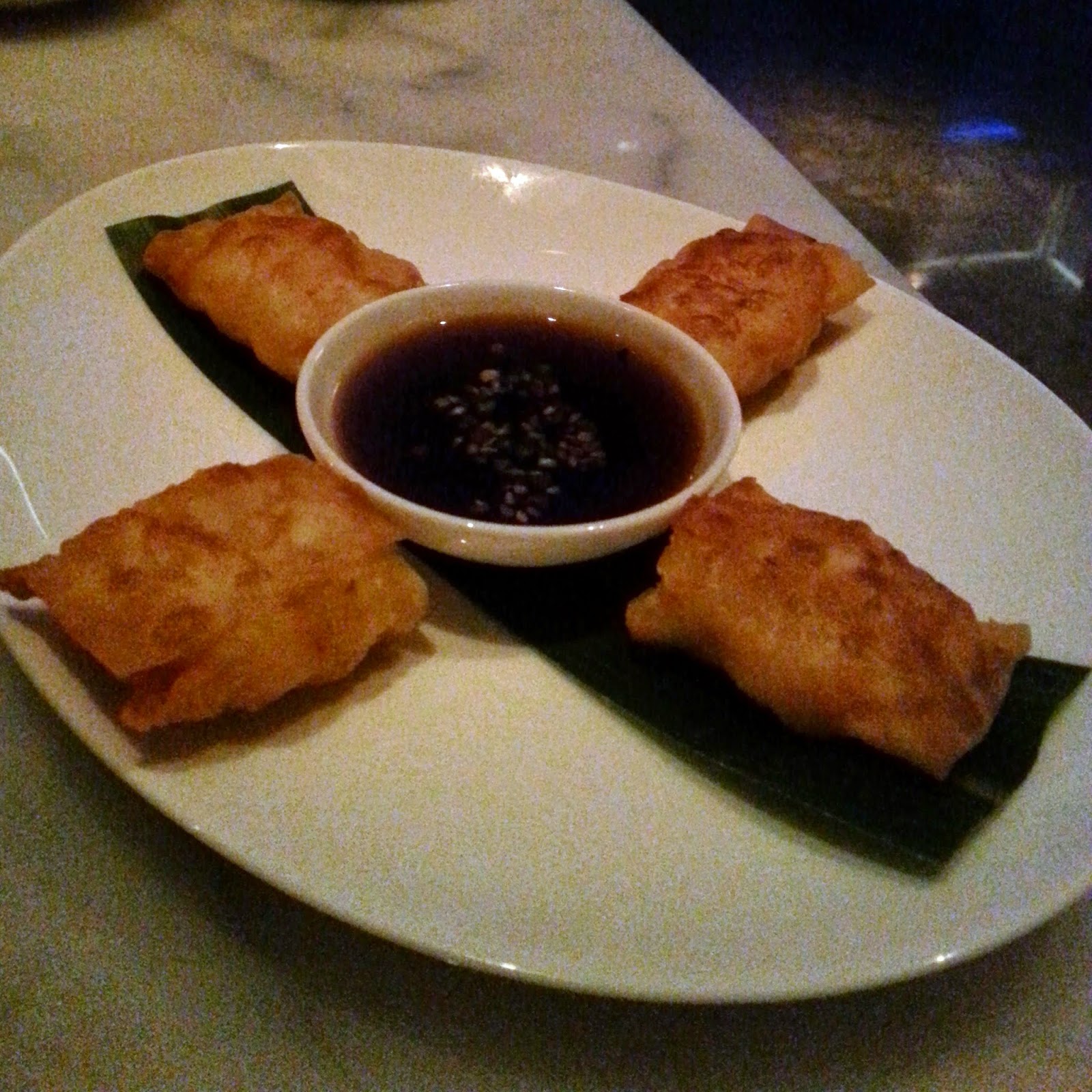 The Chicken sui mai was soft and lovely but to be honest there isn’t a dimsum in this restaurant I don’t like including that pumpkin one they have and I don’t even care for pumpkin! 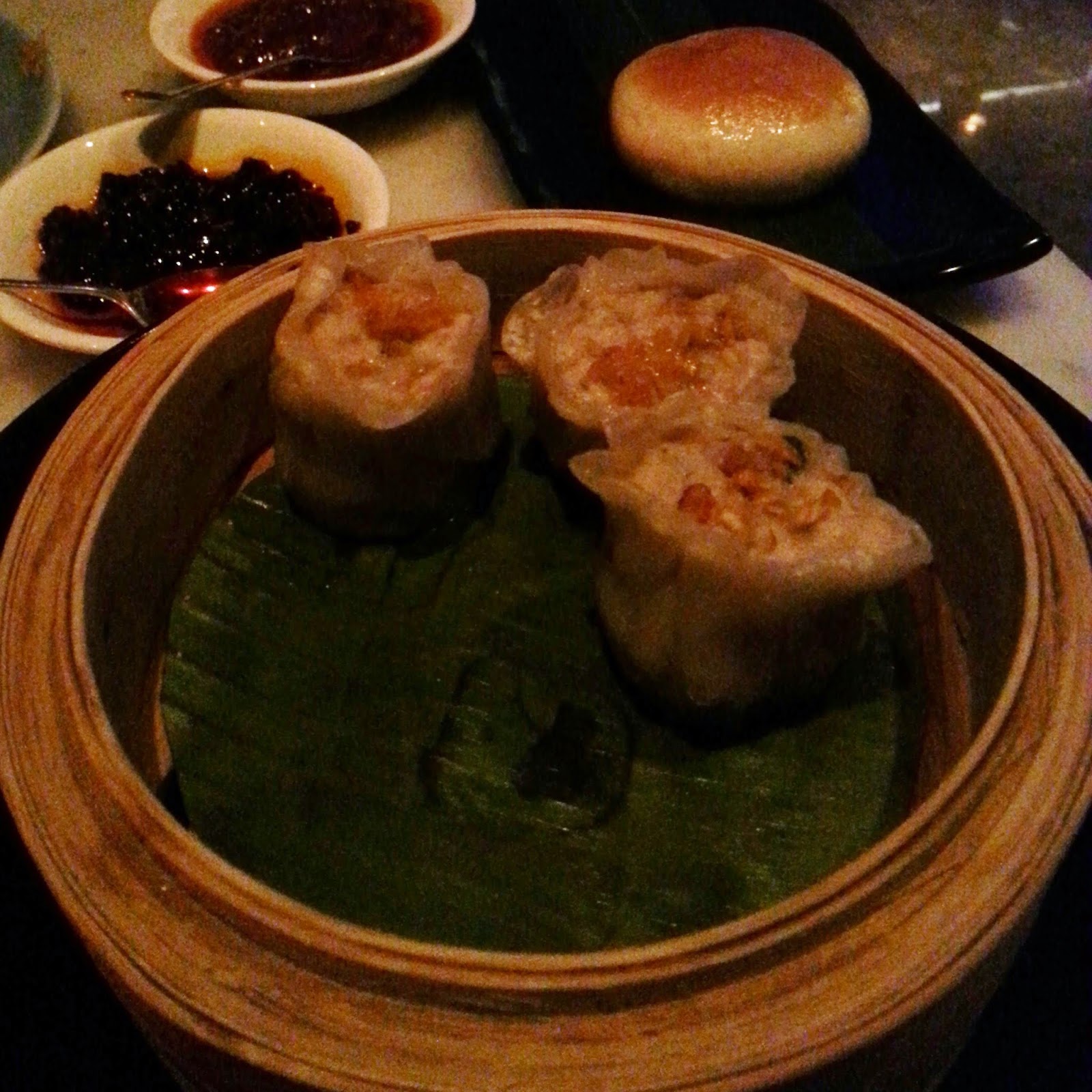 The pakchoy and onion filled bun is completely different for the other sticky buns you usually get. This was much softer and has a slight glaze on the outside and stuffed with diced pakchoy and onions. I thought it was interesting and to be very honest I’m not a sticky bun or any Chinese bun fan at all, but this was a welcome change. 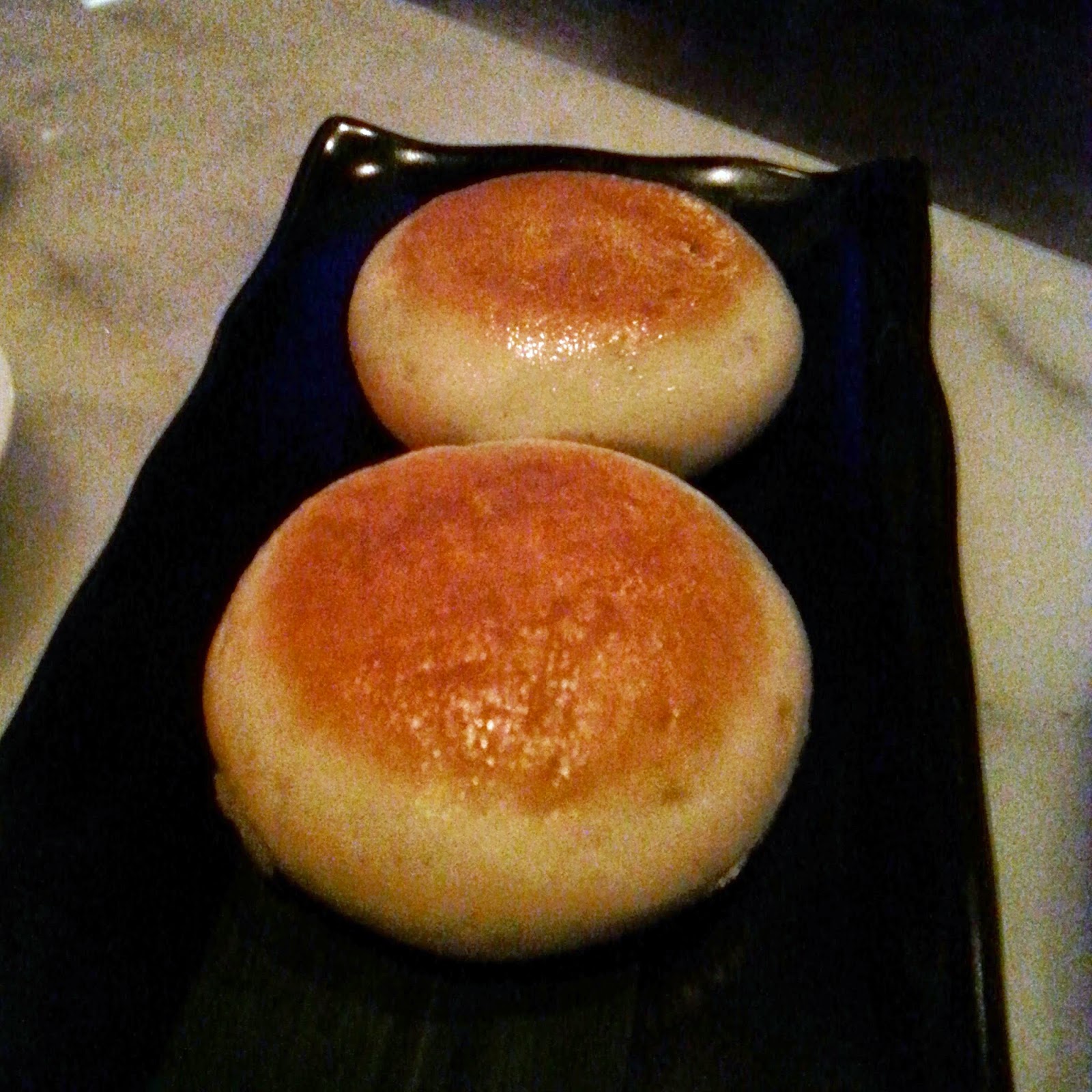 The real winner for me was their Lotus stem dish which I thought was super and a real surprise. I don’t particularly like lotus stem because so many places that I’ve eaten it at cook it hard. This was batter fried so almost like a fritter and was just incredibly soft and crunchy. I think it was a great dish. 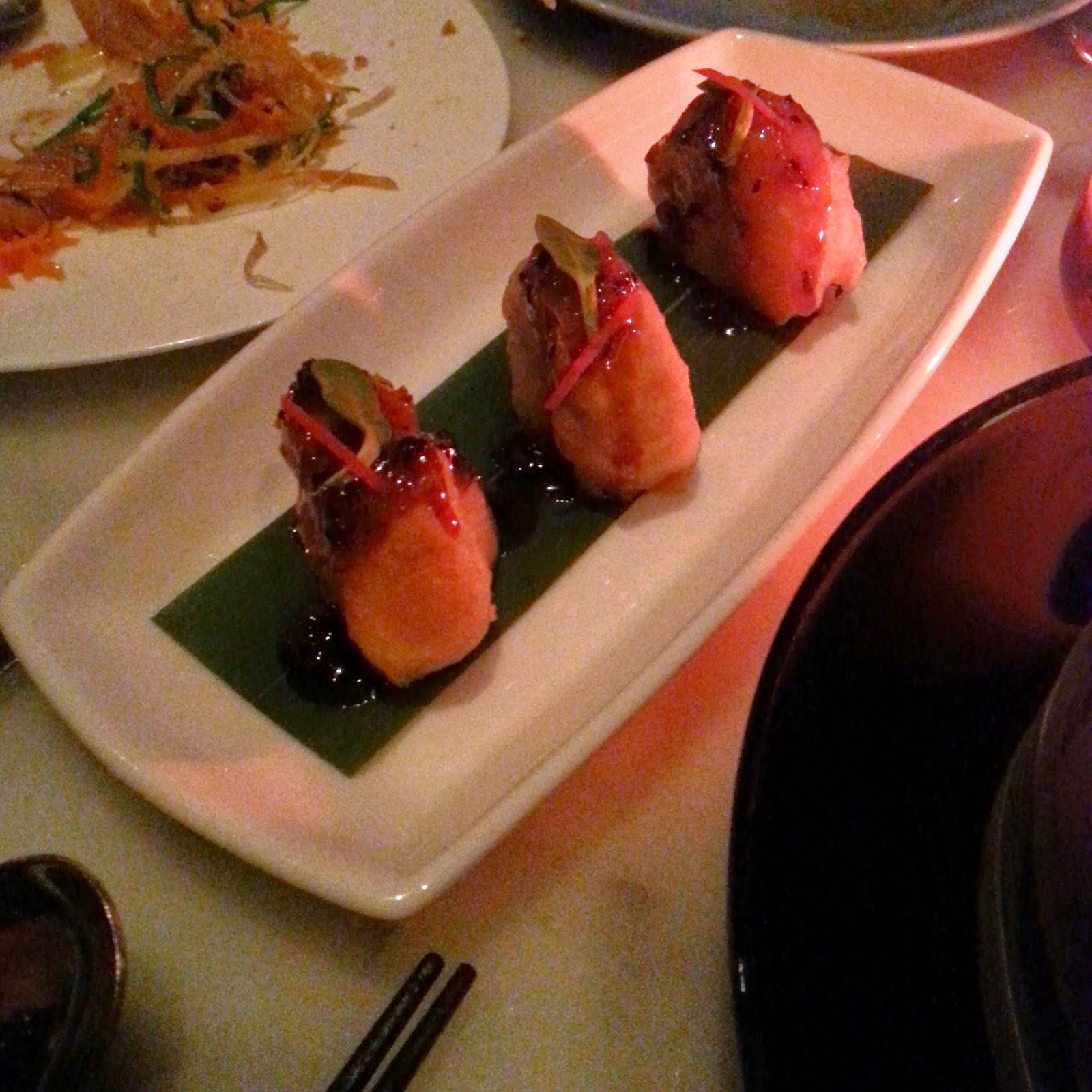 There are many mains to choose from and you can have them all but quite honestly we didn’t have the stomach for it. The only regret is I didn’t try their lychee flavoured pork belly which sounded amazing but I’m told by two tables nearby that it was the mother of all pork bellies, so if you’re trying this menu then make sure you don’t miss that one.
We had a golden dragon chicken which is chicken and prawn meat with a layer of crispy chicken skin on top served with kiwi and mango. I think it’s an innovative dish and love the usage of fruit in food but I do think some people might find it a bit bland. I’d say try it, it’s a different flavour and if it’s not what you like you can always spice it up with the sauces they serve on the table. 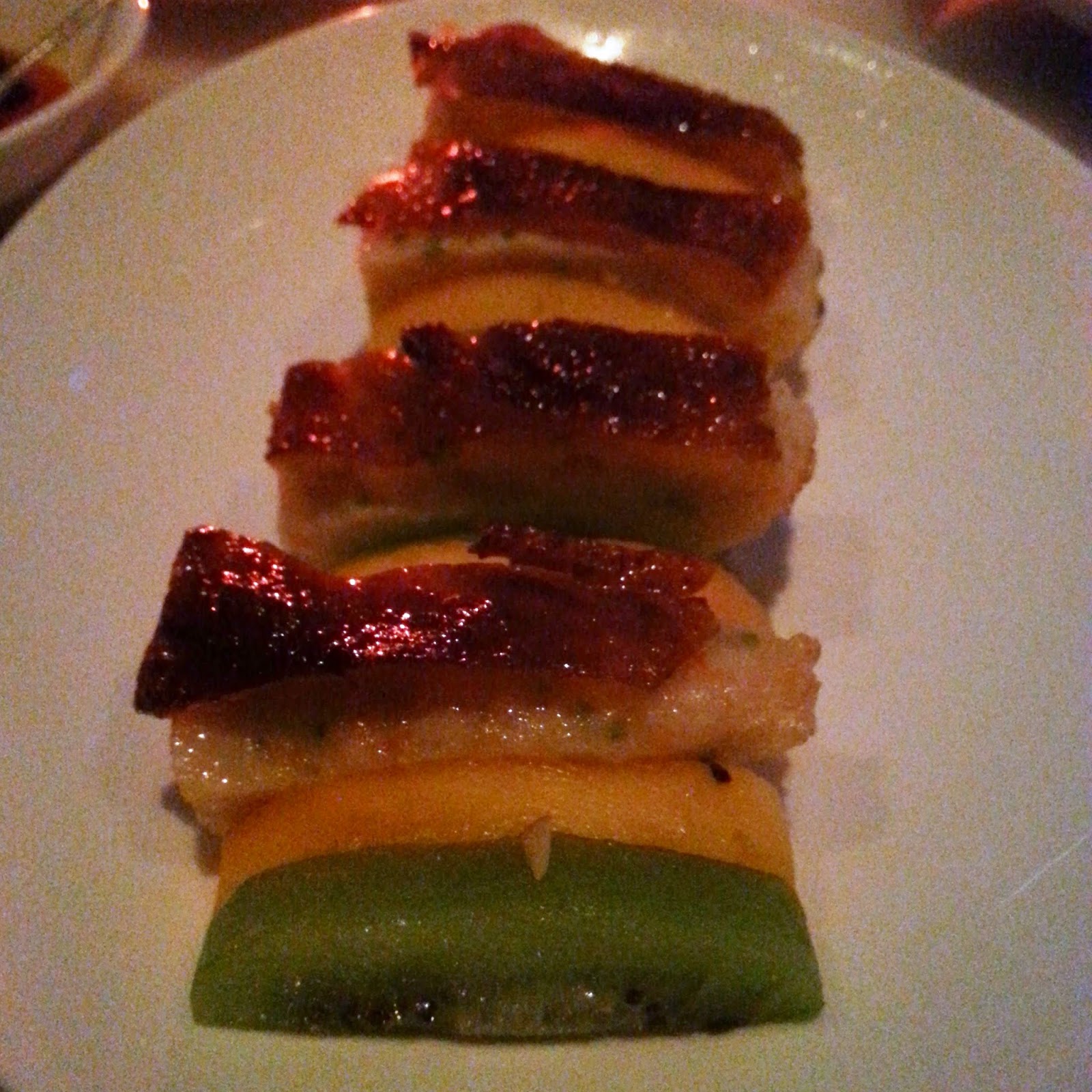 The thai wok tossed prawns are a good dish and I’m sure most would enjoy them but I found them rather similar to what I would find in any other restaurant. Dare I say generic? Maybe I expected a slight difference in what Hakkasan had to offer. Though like I said I still liked it and was happy to eat it. 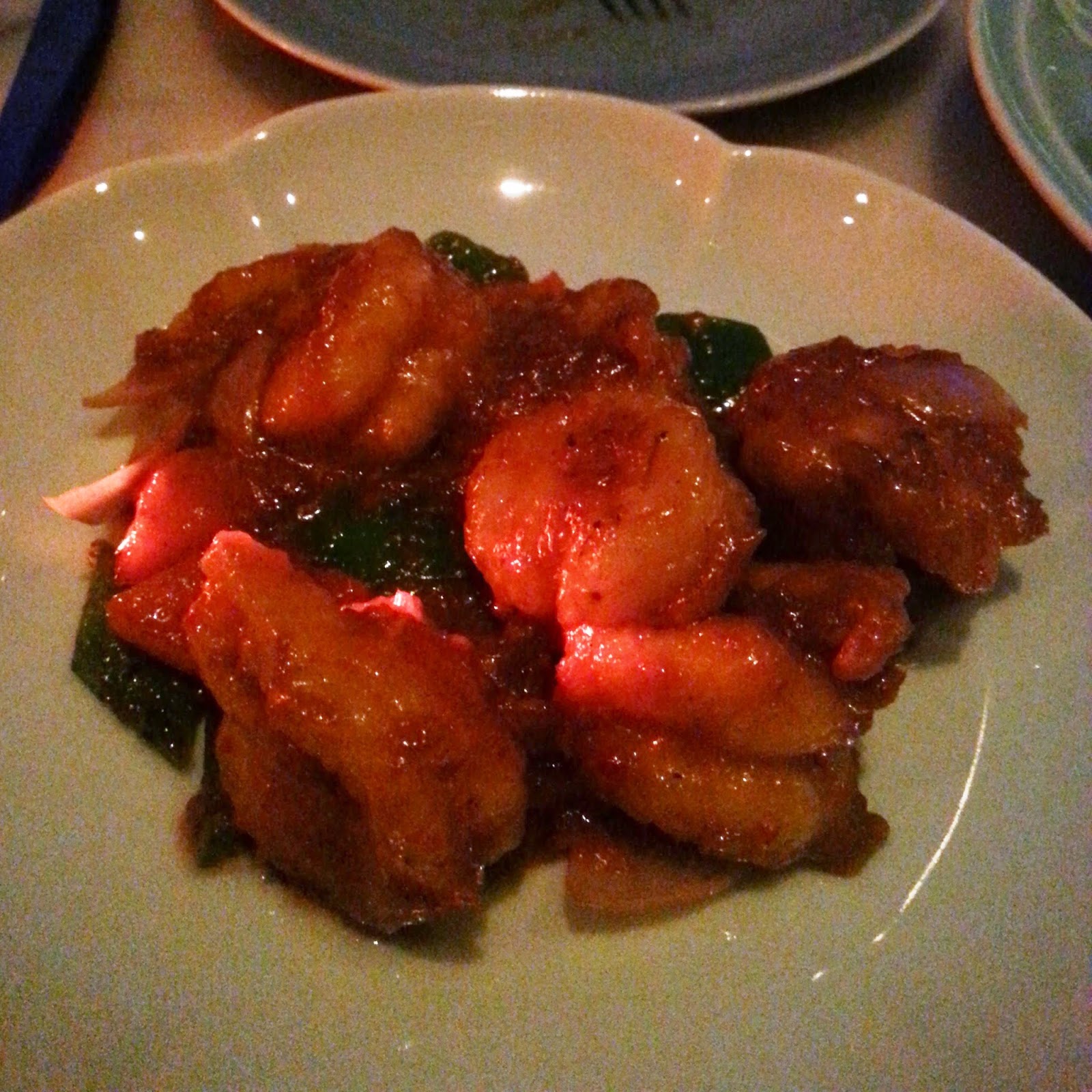 Their Pakchoy in oyster sauce is the simplest dish in this menu and by far the most delicious. I love simplicity on a plate. As much as I enjoy the theatrics of serving and the courageous coupling of different ingredients I’m most pleased when a simple no fuss dish tingles my taste buds. The oyster broth with a slight pinch of  chili with the pakchoy is a win. 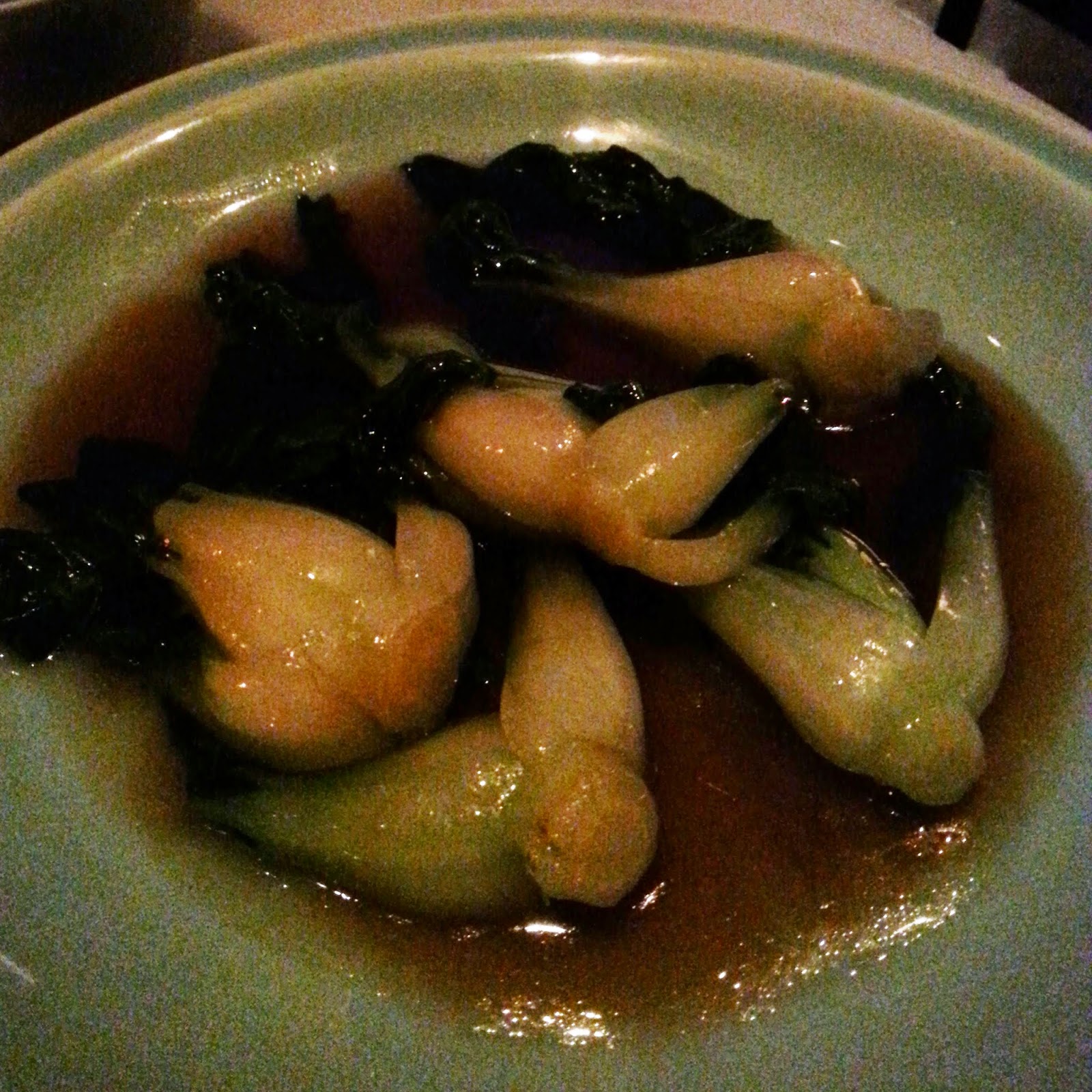 There are options for rice and noodles though I skipped those. I’m still on my diet so I’ve just tasted the fried starters but avoided anything outrightly carb- filled.
Desserts was a decadent chocolate orange cake which is served in a glass with a generous scoop of orange sorbet and a chocolate wafer solidified on the rim of the glass and hot chocolate poured into the glass which melts the layer on the rim and adds to the decadence. I didn’t even have a bite of this for chocolate completely turns me off but my sister whollaped it in 3 minutes flat! 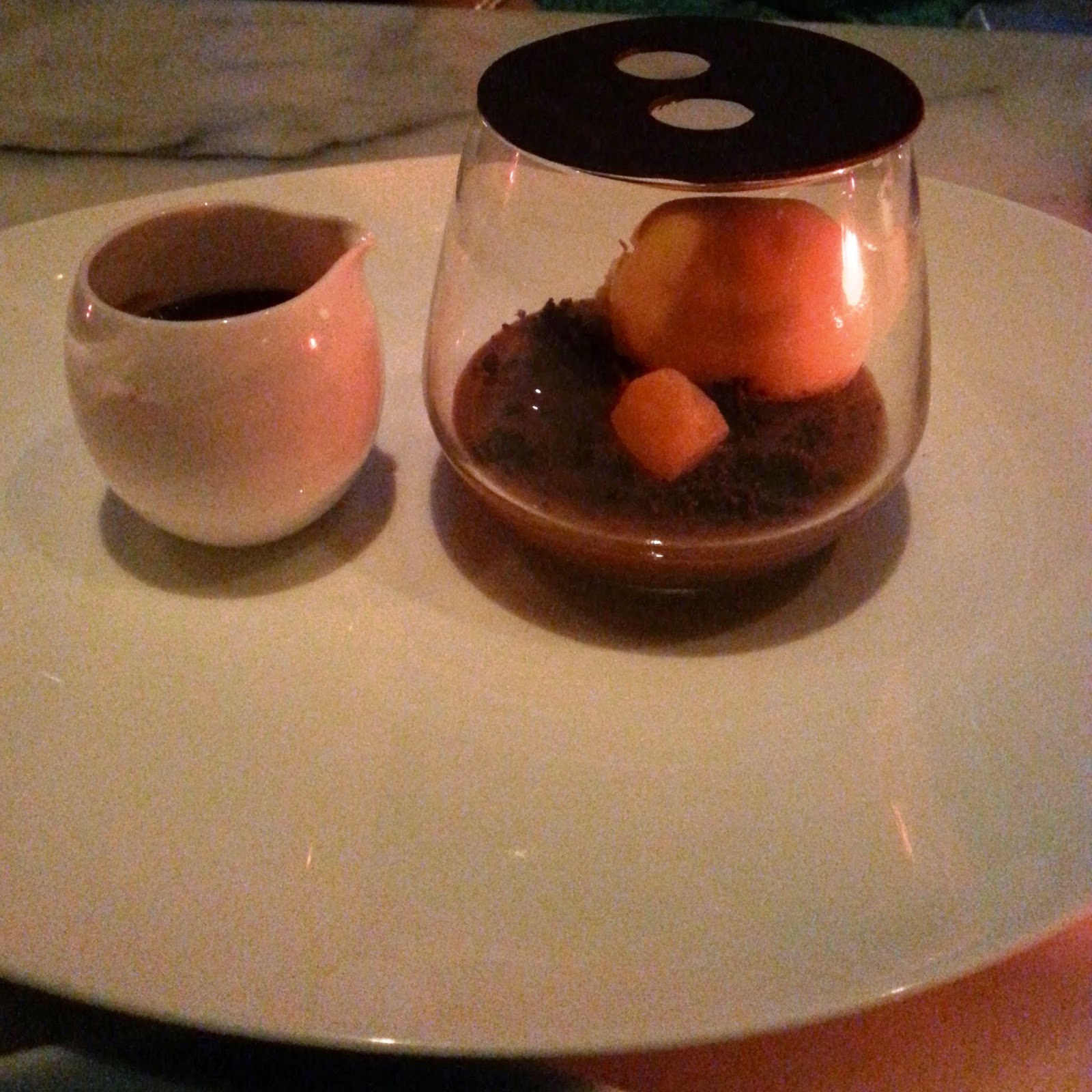 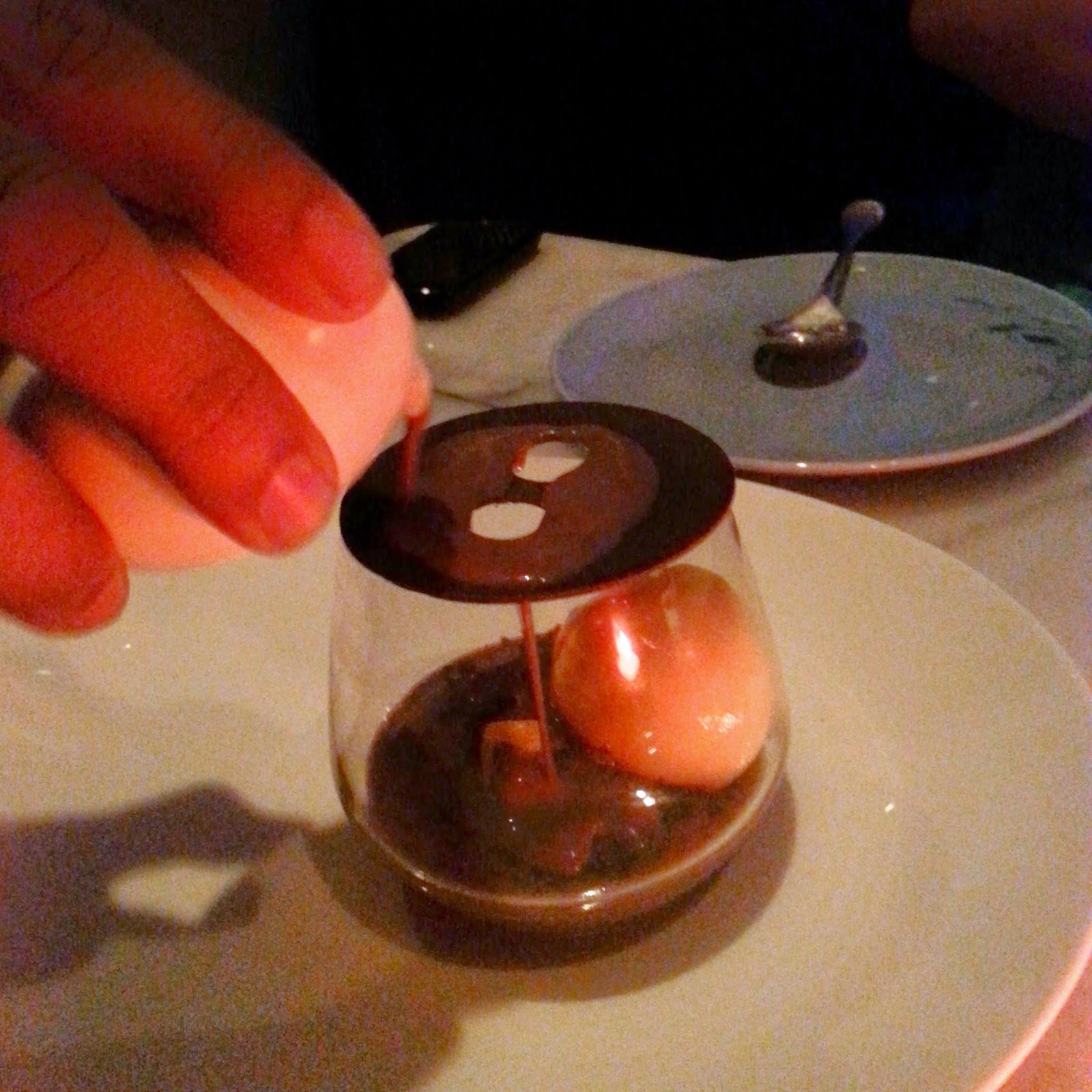 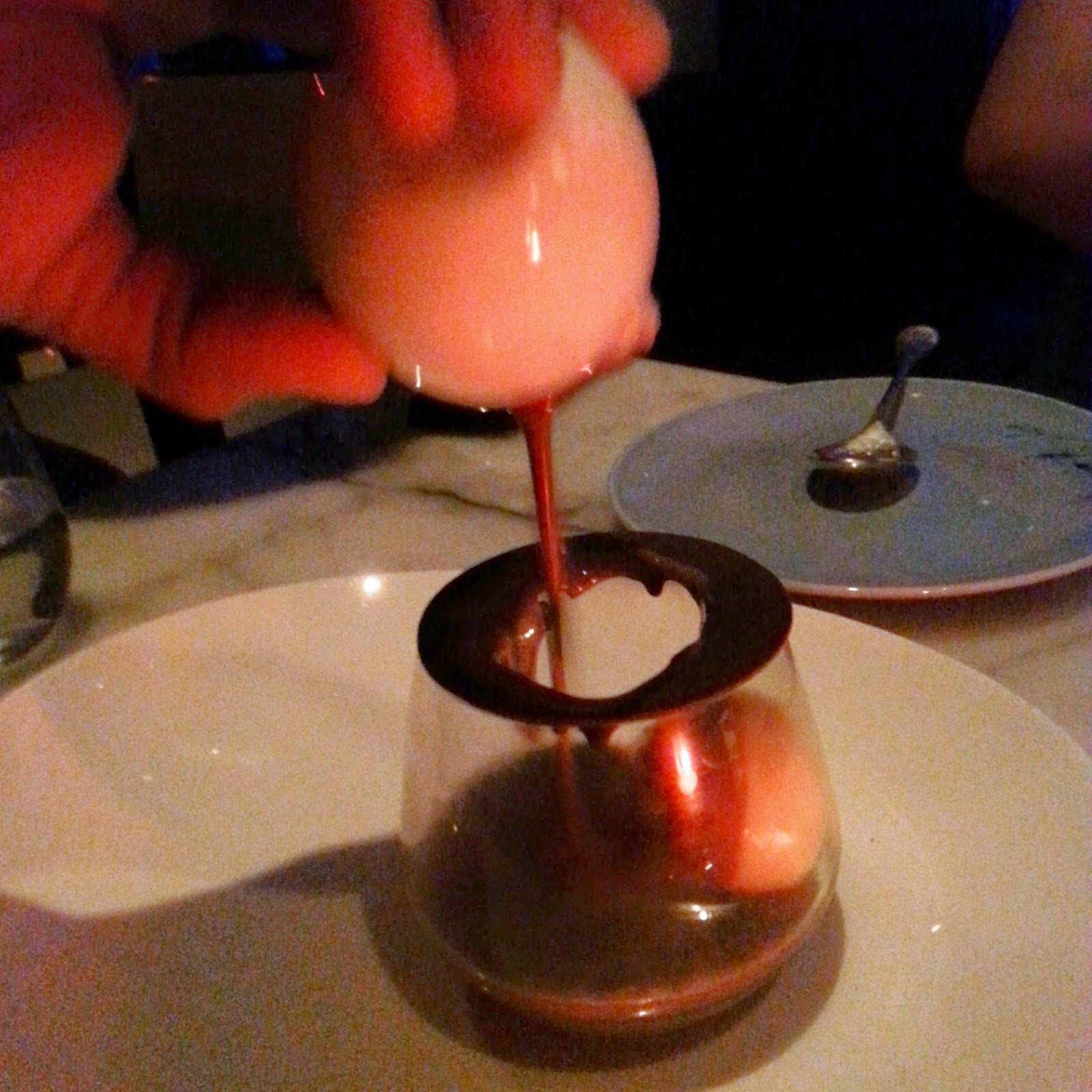 The strawberry pannacota is what I tried and to be honest it wasn’t a panacotta. It’s a great dessert with a sponge like base, a pudding- ish centre, which is supposed to be the pannacotta but I felt had the texture of a soft cheesecake , and a layer of lemon grass infused jelly with a scoop of ice cream and some white chocolate. On its own it’s a lovely dessert and that lemon grass jelly is great! An acquired taste I think as everyone doesn’t like it but I thought it fabulous. I just don’t think this is a panacotta from any angle and am slightly upset because the menu says pannacotta and in my mind I’m already excited about what I’ve ordered. I shared my feedback with the restaurant, who knows maybe they’ll call it something else. 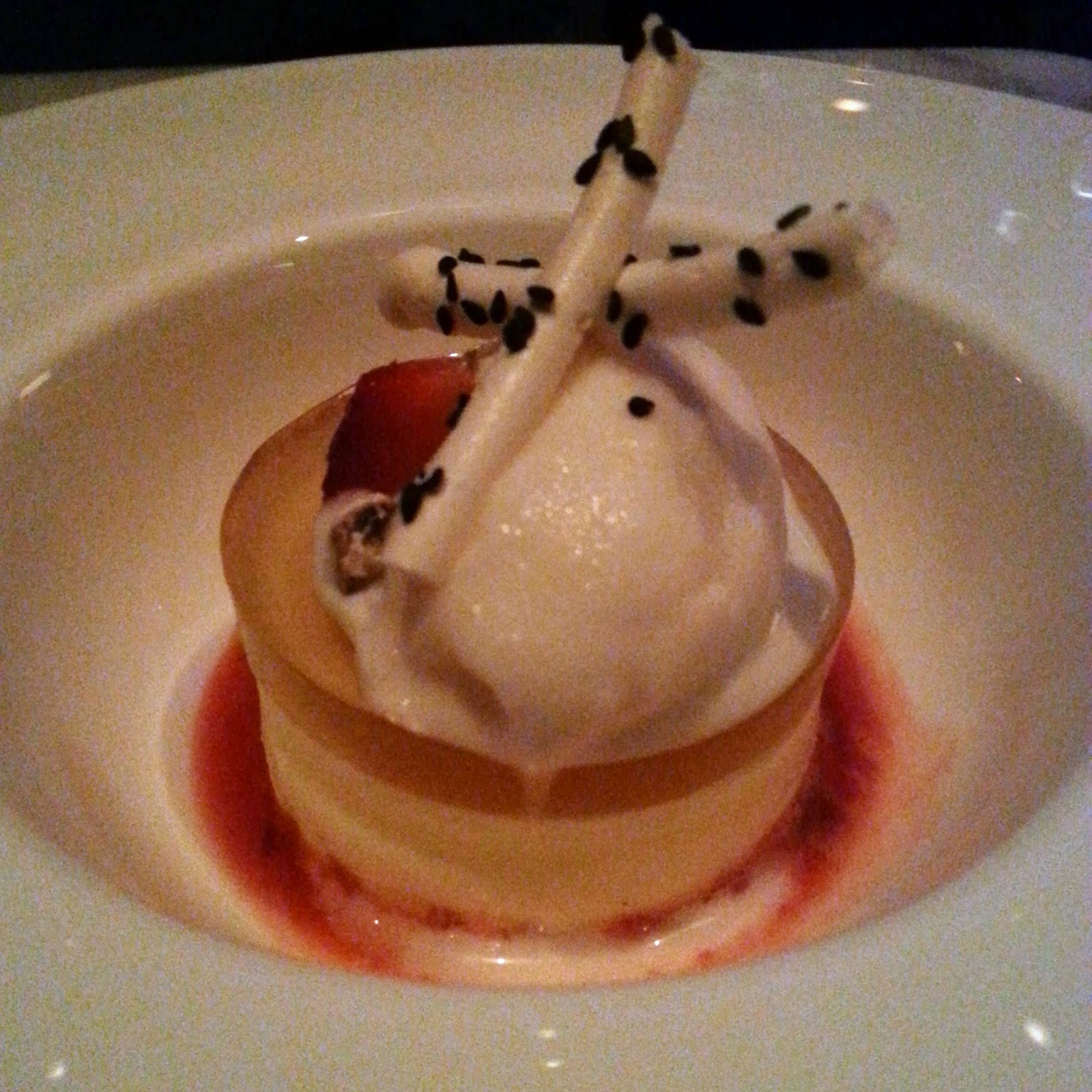 My entire meal was lovely. If you are venturing out to try any of the multiple Chinese New Year menus that are floating about the city I’d suggest you give Hakkasan a try. It’s pricy but they definitely take the initiative to give you a stellar meal. With most dishes I think they managed to – This taster and her companion were pleased.

Vienna Travel Guide – Things To Do In Vienna Austria