The Tiny Taster
It’s been three days of Kerala surfin’ and third time’s the charm! I finally had my first thoroughly satisfying Kerala styled meal.  So far I’ve had glimpses of authentic Malayli food, guest appearances by apams in my breakfast buffet, the occasional avial and thorans ( cooked in grated coconut) but I hadn’t had a complete Malyali meal till today. 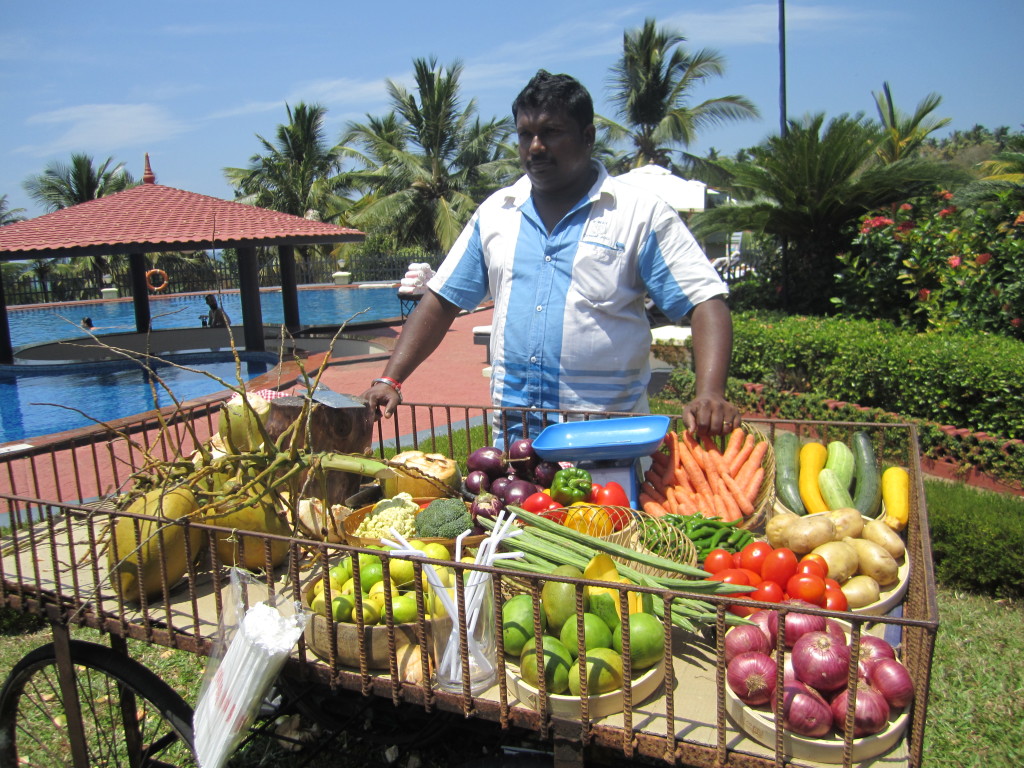 The Raviz Hotel which is a part of the ITC chain of hotels has an beautiful water front property right on the backwaters of Kollam. As I’m constantly told, Kollam has virgin backwaters, almost as if people haven’t discovered its beauty and it’s still uncluttered. 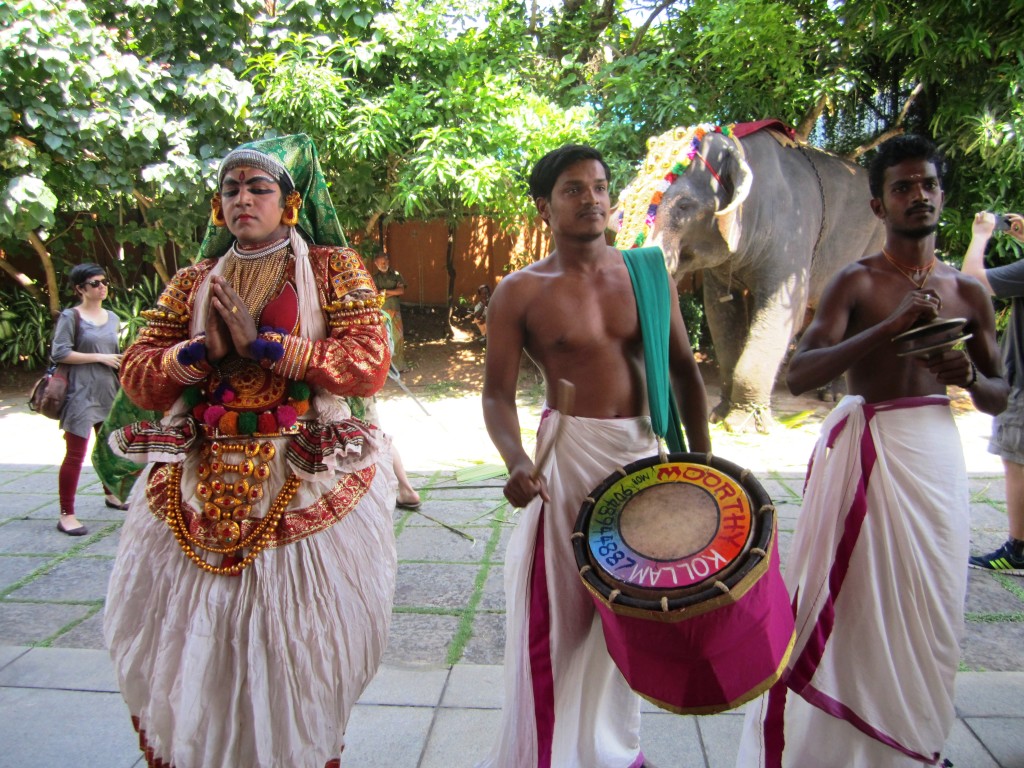 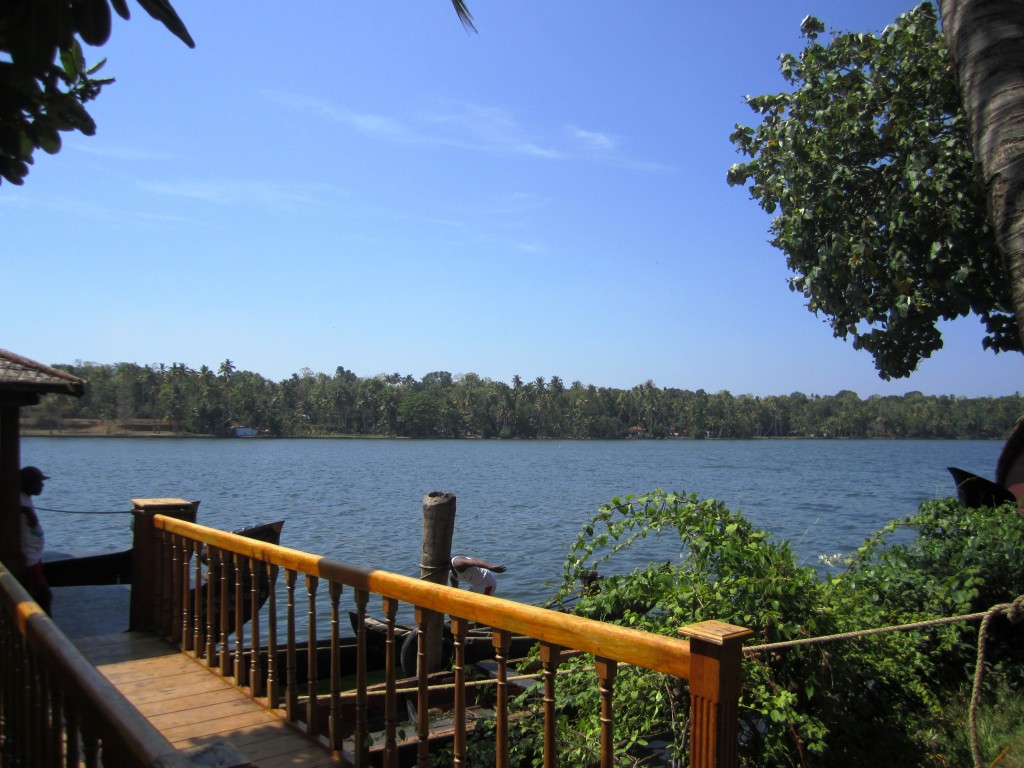 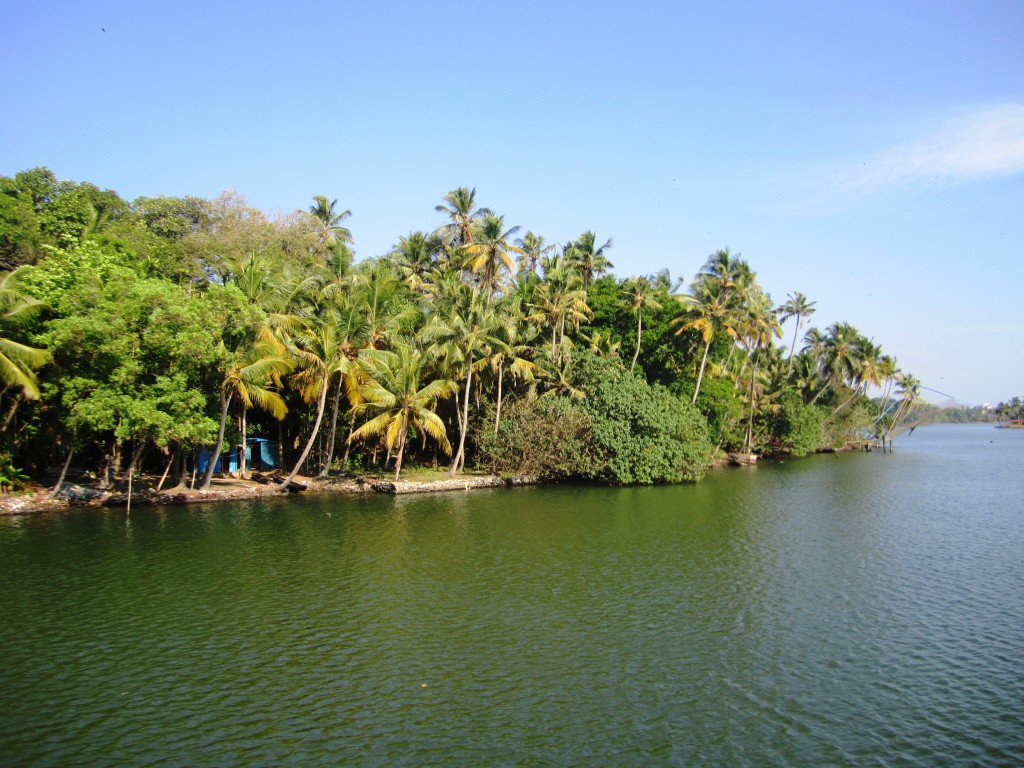 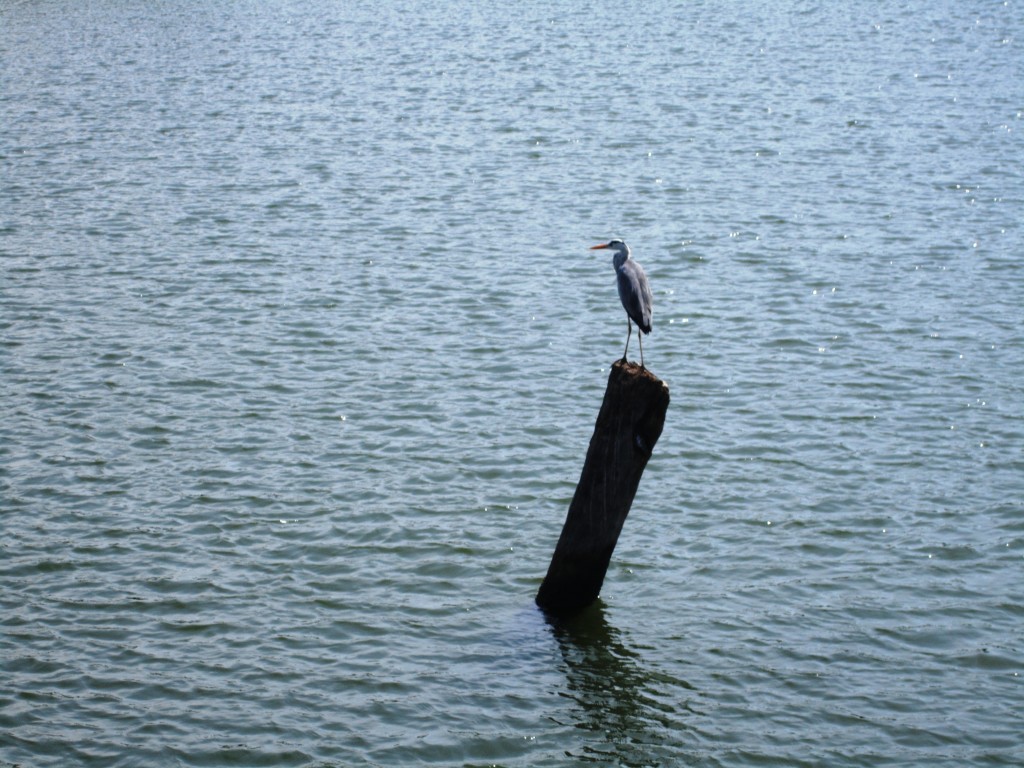 Needless to say an afternoon spent on a houseboat going up and down the backwaters and gorging on some traditional and superbly fantastic food is the best way to dine. I mean a sadya is great and eating on banana leaves is fantastic but lunch on a boat surrounded by palm trees, Chinese fishing boats, and blue water is THE way to dine.
K had given me a list of what I should eat and what I must absolutely positively NOT miss. One of these was the fish moilee. I don’t know the name of the fish but I know it’s local and found only in Kerala. The curry is coconut milk based with tons of turmeric and green chilli and similar to a Thai curry in terms of consistency but not as much coconut milk as a Thai curry. It’s well balanced and surprisingly light for a curry. I’m so glad I had a chance to sample this because it’s going to become my new favourite Malayi dish. 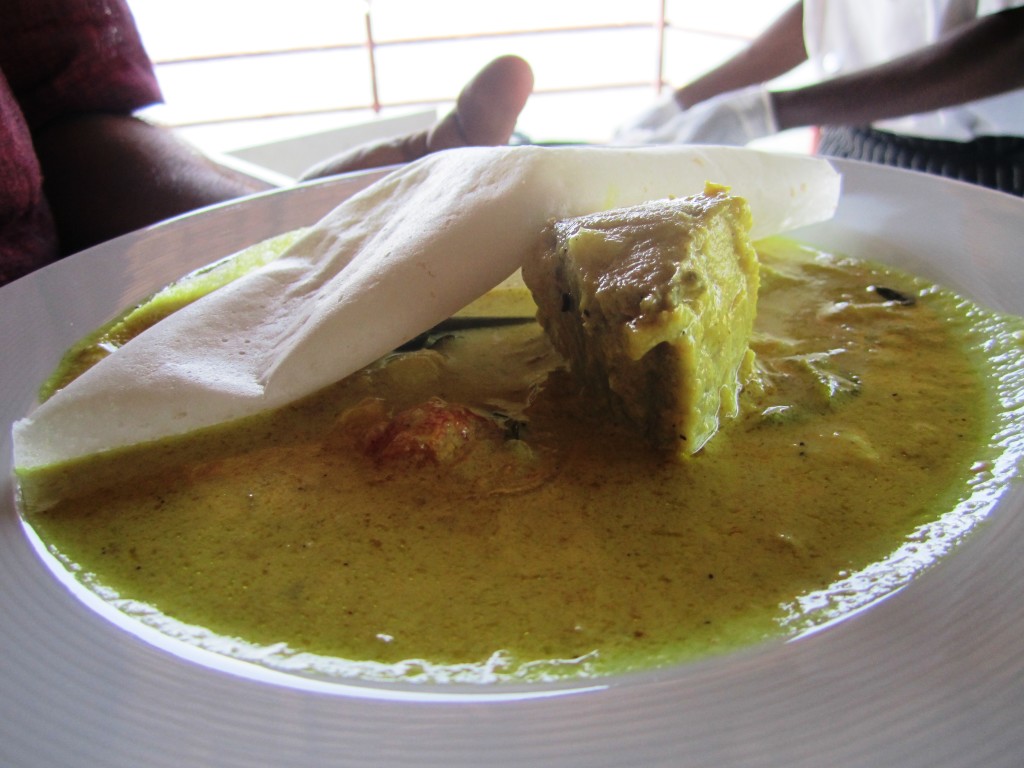 The Biryani which was mutton based is light, not in the least bit oily with soft pieces of mutton.The chicken is something I’ve seen on the buffets but this was the best one. Very similar to a roast but this is drier and has less onions but again in terms of taste and texture, it’s eerily similar. It works well with the Kerala rice and meen moilee ( fish curry ).
Interestingly they make a bitter gourd dish which they’re very proud of. People run away from Bitter Gourd but this is made in coconut milk and once again cooked in coconut as most of their food is, and it’s the coconut that takes away the sting. I tried it, It’s not my kind of dish but I’ll agree it’s different. I’ll stick to my curry and roasts. 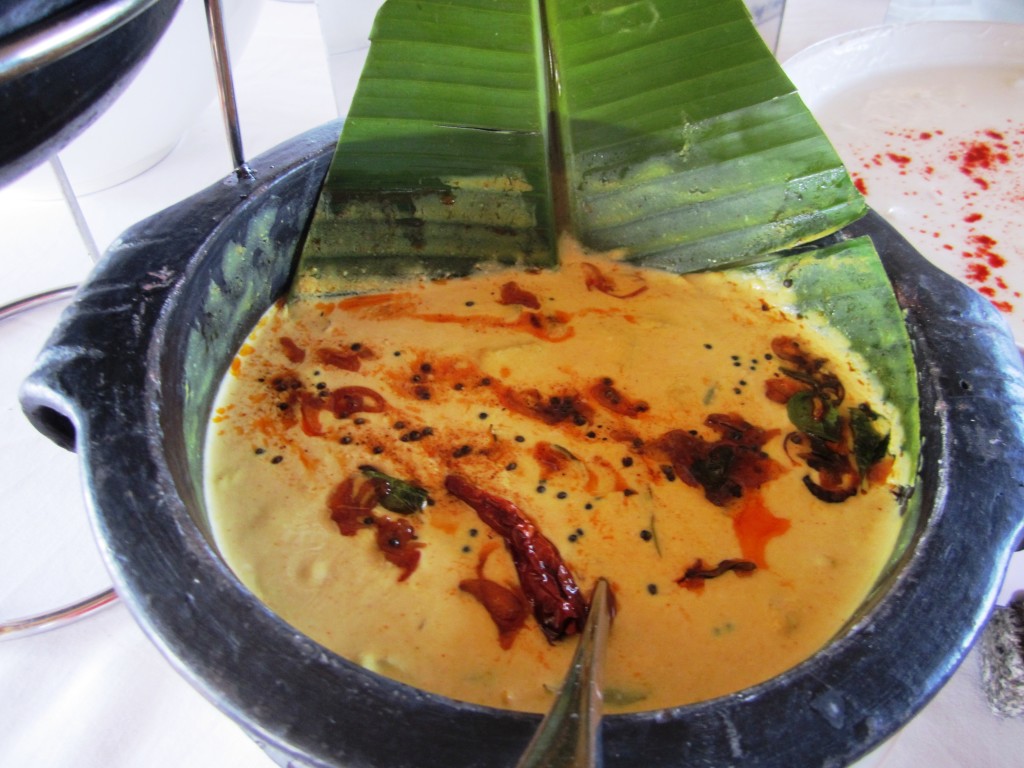 There was brilliant mildly spicy shrimp being skewered and tawa cooked which I think was a universal favourite. I don’t know if that was a typical Kerala dish but it was great. I would eat them like candy. You can’t just stop at one.  There was of course fresh apams being dished out and pickled chilli and various other condiments but I seemed to be drowning in my curry and didn’t pay too much attention. 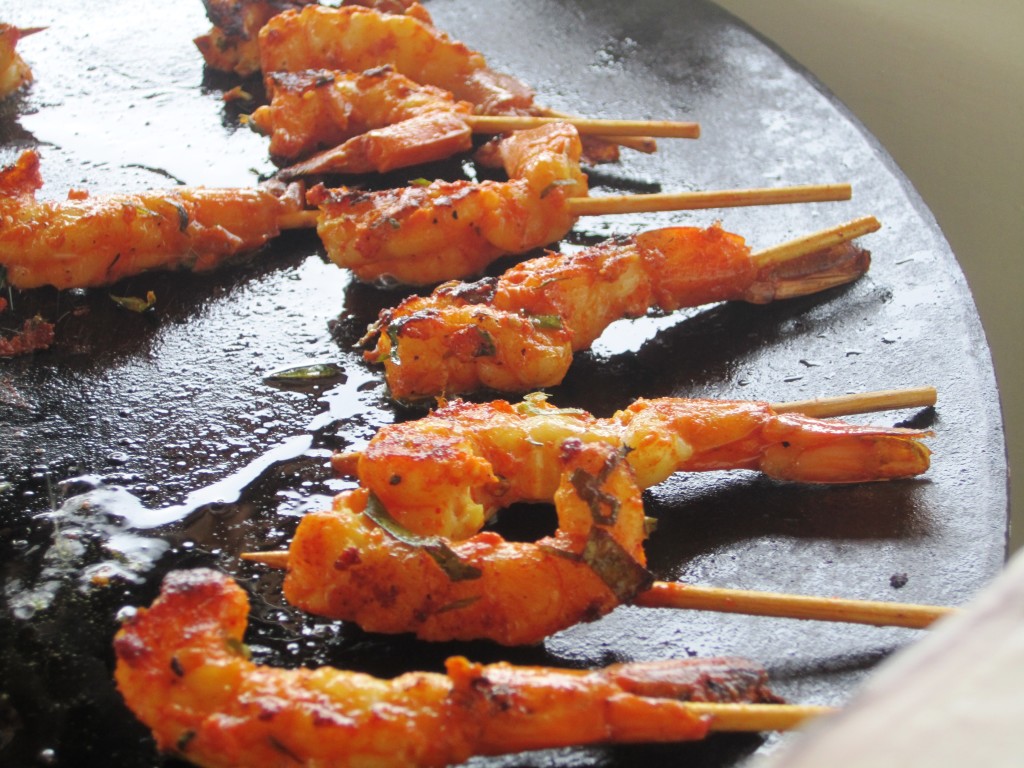 I love how there is always papaddums, banana chips and these fried very sariya like wafers in every meal. They even have a Peppy like fried crisp which I loved. 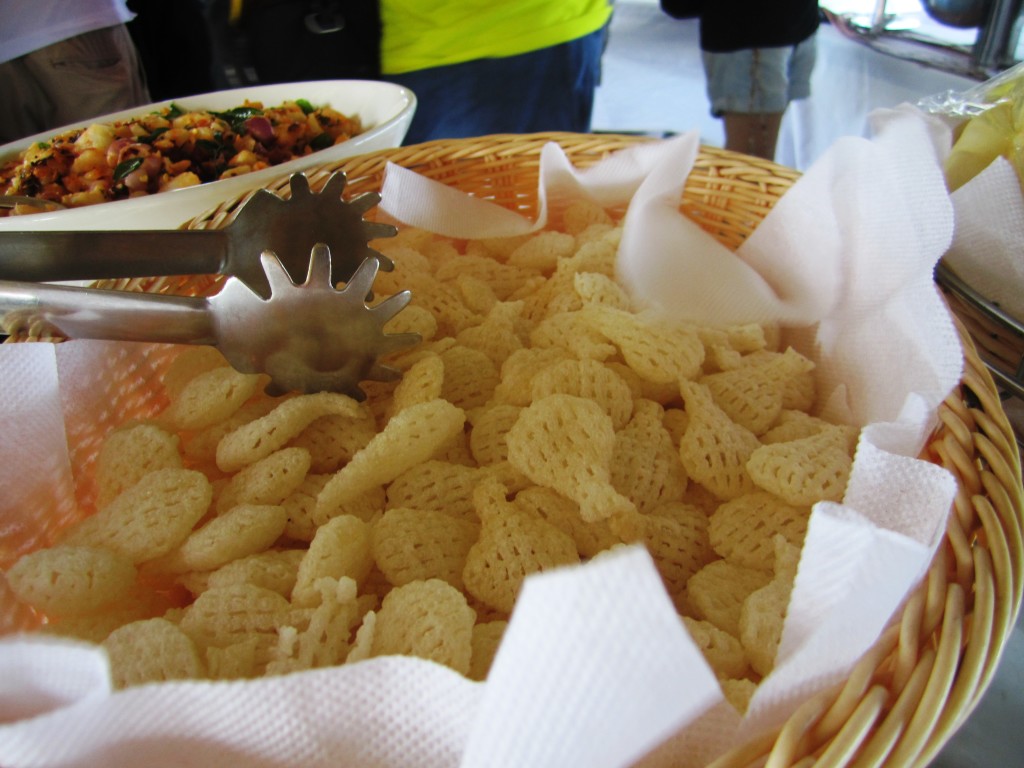 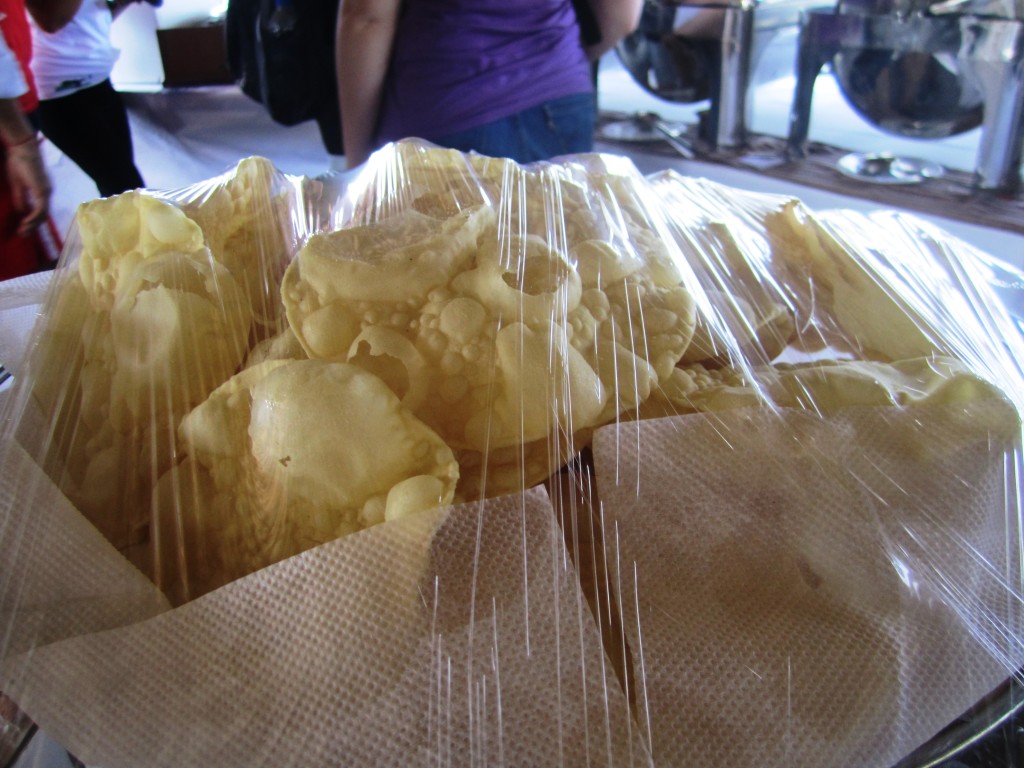 Dessert must feature a payasum which I think is a great way to end a meal. It’s oddly refreshing. Some coconut stuffed pancake coated in jaggery. They seem to really enjoy jaggery  and another dish who’s name I can’t remember but it’s exactly like a caramel custard but once again, surprise surprise.. it’s cooked and glazed with jaggery. 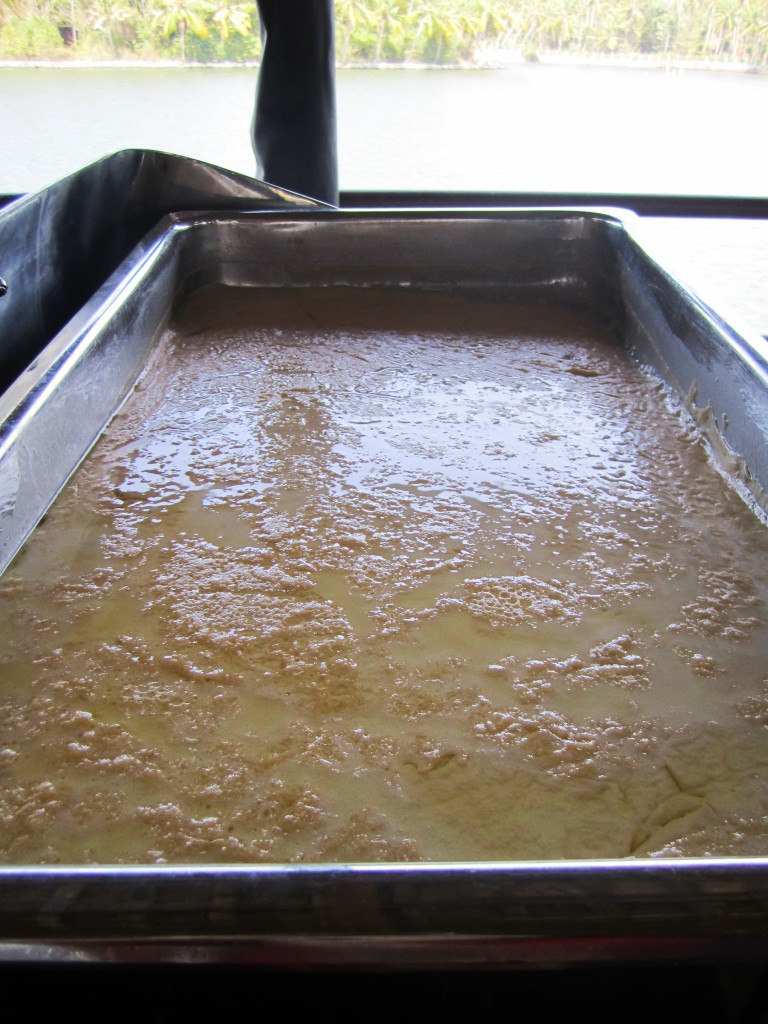 Apart from my stellar meal and fun on the boat, today’s been a day of food discovery. In my earlier post I mentioned Kerala’s banana obsession. Along with that they seem to really love jackfruit which grows in abundance. I’m not jackfruit fan but these guys make jackfruit chips which I have to say are brilliant ! Move over banana chips this one is a serious contender! They are thin crisp and YUM !
I discovered Podi idli which the idiotic waiter told me means ‘ small idli’ but podi actually refers to the masala that coats the idli and then it’s fried and topped with a drizzle of chutney. They cut these into little pieces which is actually smart because the smaller the pieces the tastier it is instead of one massive idli. Delightful and reminds me of a little cocktail starter. 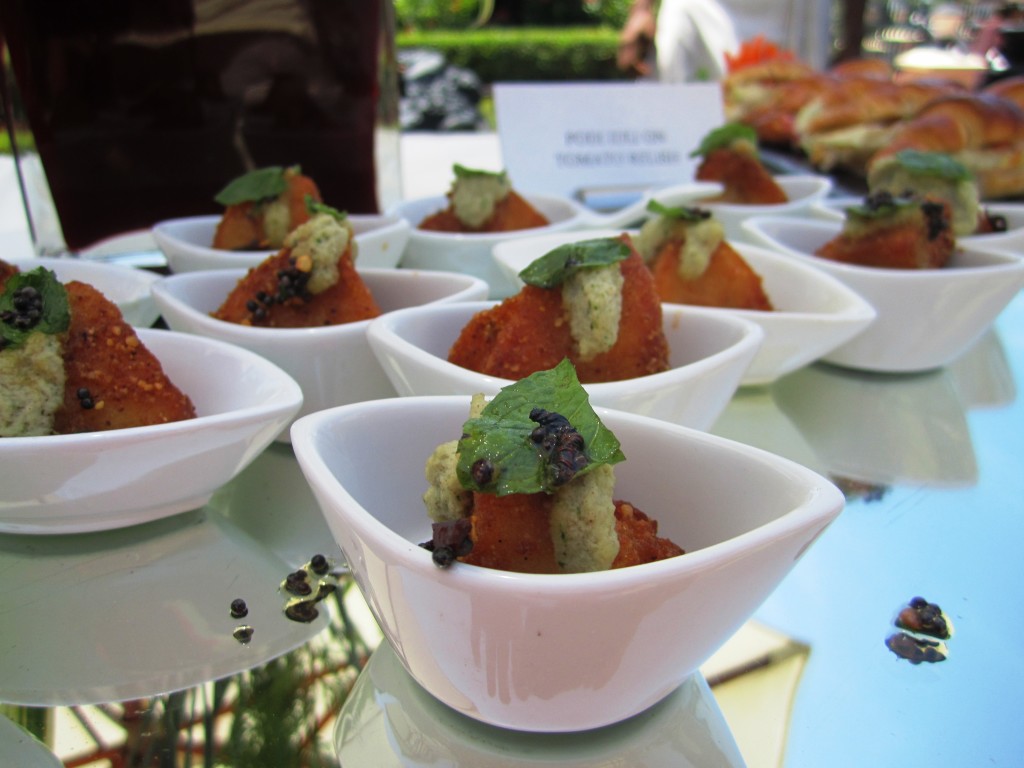 Unniyappam is a snack which is prepared usually in temples and given as part of the prashad or as we parsi’s say ”  bhanailu fruit or bhonu “. It’s made from rice, jaggery , ghee and cardamom powder. It’s sticky but it reminds me of a sweet moist bhakra. The bhakra is bigger of course and crisp on the outside and soft inside. This is similar to a bhakra inside but softer outside as well. 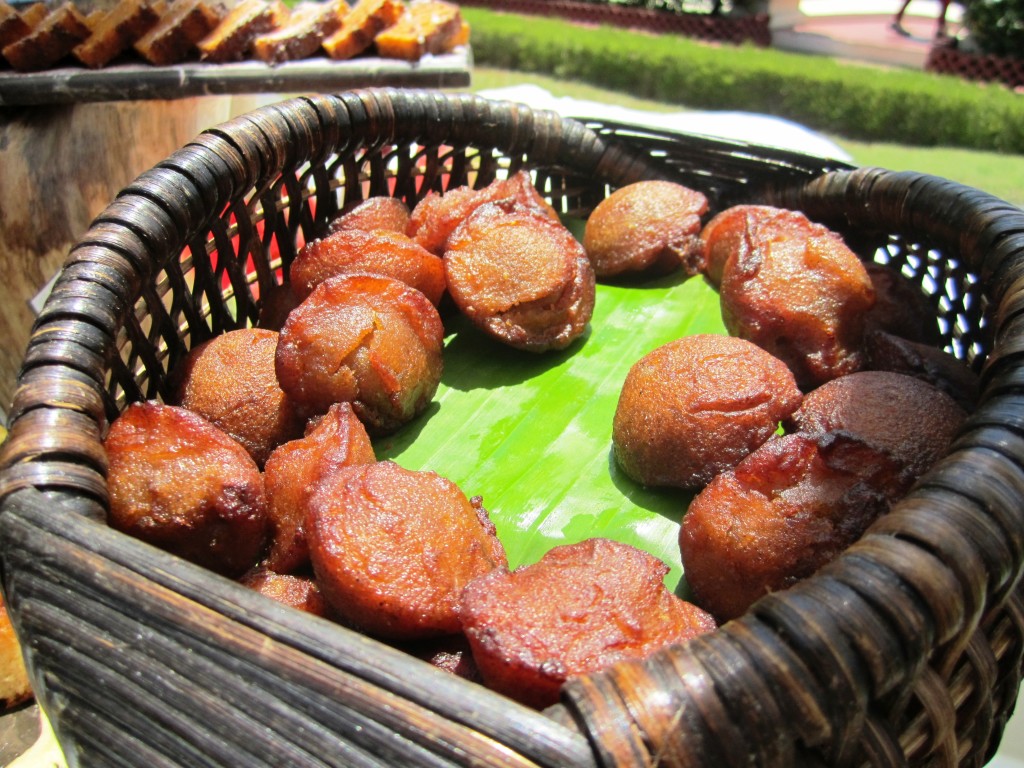 I came across another sweet item which is achappam which are thin strips which are curled but taste so similar to a shakkar para. They remind me of the Honey noodles that are served as a dessert in chinese restaurants only these are not soaked in honey or sticky, they are as is but great to munch on with fruit or even ice cream.

This has been a great day. Good food makes everything fantastic. I can’t wait for more. Next stop on the Kerala Blog Express.. Allepey here we come !!

Things To Do In Sydney

Comfort At The Courtyard – The Marriott And Me !