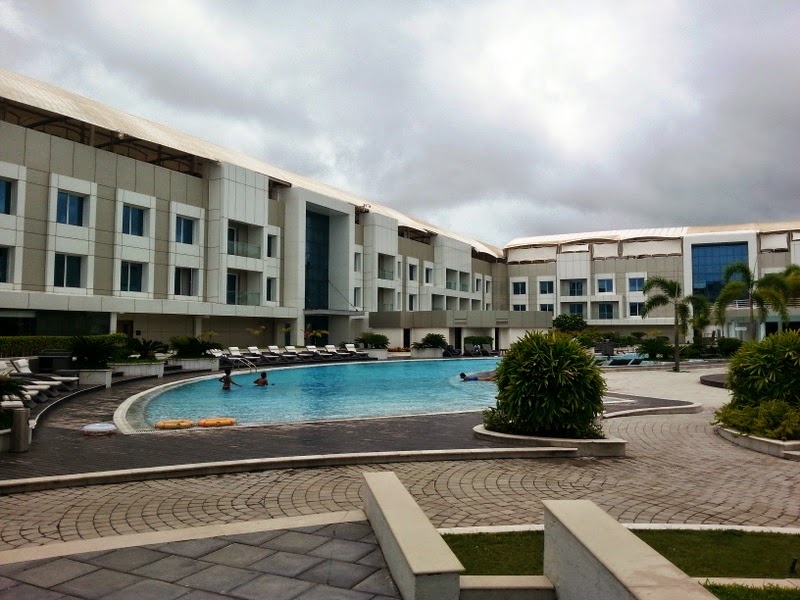 Daman is a small sleepy coastal town near Gujarat. It’s claim to fame is that it’s a Union Territory and the only place for salvation in the dry state of Gujarat. During the week it doesn’t get much action but come the weekend and it’s  party central with everyone popping in for a quick getaway. It would always be a great spot to visit for a meal whenever we were in Udwada or even Dahanu and I know it’s the Lonavla/ Khandala equivalent in Gujarat but I’ve never stayed for anything longer than a meal.

Daman isn’t what you would call luxury land but the Deltin Hotel has injected a whole new lease of life into this quiet seaside town. The fancy resort is the only 5 star or near that anyway that makes you feel like you’re not even in Daman. Tall palm trees cascading over a sparkling blue swimming pool, rooms bigger than most student apartments with the bounciest beds, an entertainment room that includes all sorts of games and amusement are just some of the perks at the Deltin Hotel. Oh, and I almost forgot to mention – an inhouse casino which is scheduled to open in the next couple of months!

The hotel has two restaurants and a pool-side bar which isn’t operational in the monsoon season. Their 24 hour coffee-shop is called Vegas and has buffet meals which offer a wide selection of dishes and cuisines, but if you ask them they can tailor make a 3 course meal as well. I find the food at Vegas to be better than I expected but not entirely fantastic.

The other restaurant is their fine-dine called Emperor which serves Kolkata Chinese food or Tangra cuisine as it’s often referred to. Chinese food in Kolkata is delicious and this restaurant doesn’t disappoint.

The hotel is big enough to house and host elaborate destination weddings which I’m told have suddenly become popular and a lot of people from Surat and Ahmedabad host fancy weddings, but I find the hotel to be one where I’d spend a relaxing weekend just unwinding and taking a break. The hotel will of course see a lot of traffic, more than it does at the moment ( which is quite a lot specially on weekends ) once the casino is launched. Along with it, a plush shopping arcade that will house branded stores, a delectable patisserie as well as a salon which at the moment is Spartan but operational. I think a fair bit of additions will be made once the casino opens its doors.

Of all the things I discovered at the Deltin in Daman, These were my top 5 picks
My room – the one thing I really enjoyed the most was my room and bed ! I know it sounds silly but it was large enough to house more than two people and comfortable enough to never want to leave!

Try their fusion flavoured whiskey –  The bar or whisky lounge is the ideal place to unwind with a drink before dinner. Though the barkeep can churn out fancy cocktails and tailor make them to suit your preference, the real highlight at the bar is their infused whisky. They’ve got various flavours like coffee, chili, cinnamon whisky and even though it sounds odd, I couldn’t help but be intrigued. They are smooth and surprisingly tasty and something I would definitely recommend trying.

Eat at Emperor – This restaurant dished out a lovely meal after a fun session at the bar. Their batter-fried stuff like calamari and lotus stem has too much batter which makes you miss the main ingredient, but the dimsums are enjoyable,  the black pepper coated lamb chop is soft,tender and drool worthy and the crispy spinach, corn and water chestnut is to die for!

Spa treatments to relax – I’m a spa junkie so any opportunity to indulge in a massage, I’m going to grab it with both hands! Their spa has all the usual treatments, couples massage which seems to be very popular and even if you don’t have time for the whole shebang, you can opt for a quick 20 min session which is what I did.

Gaming room and fuse ball – Every entertainment room has carom and table tennis but when you got a foosball table as well – BRING.IT.ON ! I wasn’t the only one amused with this, and you could hear metal clanging and women shrieking with joy like we just won the world cup! It’s such a silly game but so much fun 🙂

I didn’t make it to the pool unfortunately but I’m sure had I been there, it would have been one of my top picks as well.  I have a feeling I’ll be coming back soon, as soon as the casino opens!

The best part of my trip was when Tiny got her 15 seconds of fame moment when a couple of other bloggers wanted to take pictures with her. Gotta love that!

A For Australia #AtoZChallenge

Exploring Jakarta – Things To Do In Indonesia’s Capital City