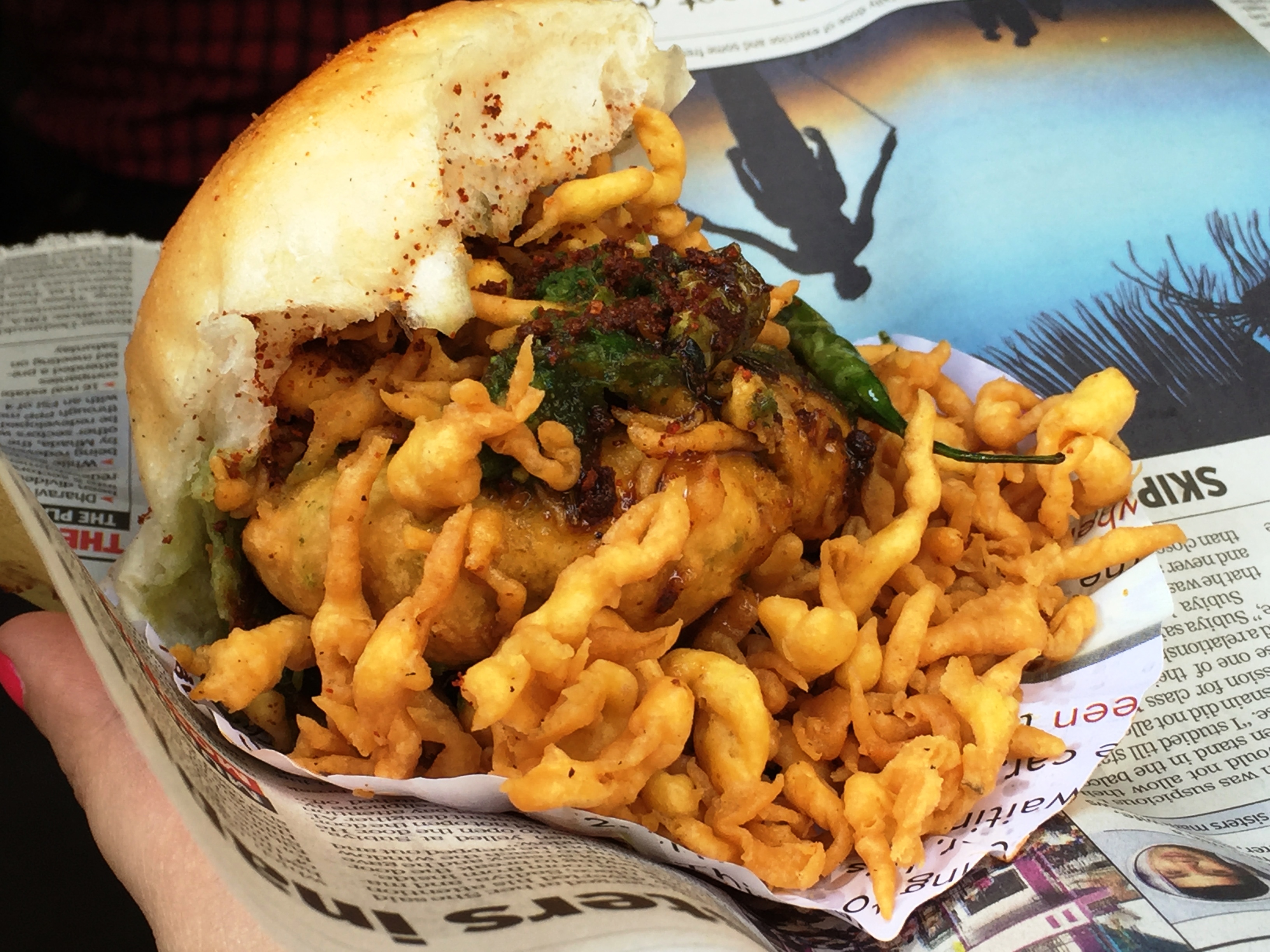 It would seem the world is slowly becoming more health conscious. Popular cooking shows are creating healthier recipes, celebrity chefs are endorsing cleaner eating habits and even brands are trying to create healthier products. I for one have decided to take my health more seriously this year and apart from the occasional meals outside ( mostly for work ) I cook at home and try to eat as clean as possible. 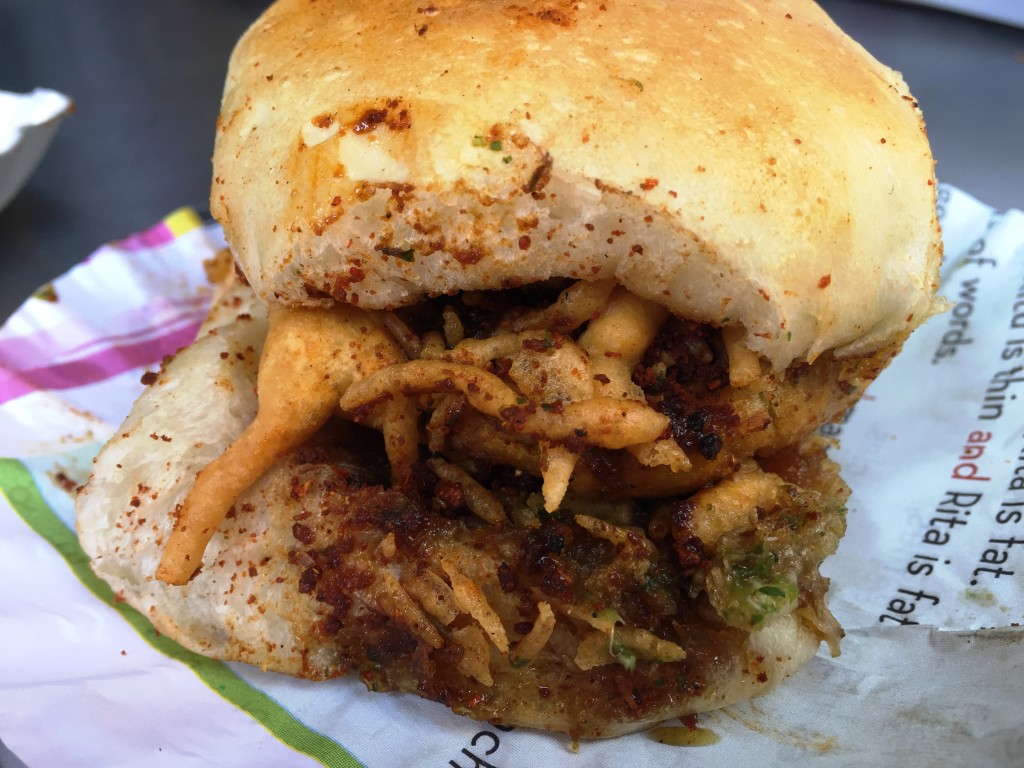 However even the most valiant efforts towards a healthy lifestyle always seem to hit a few roadblocks. I get some serious cravings every once in a while and I indulge them sometimes. It has been ages since I ate a good ol fashioned vada pav and finally gave into temptation one day while out for a series of meetings and found my self in Dadar. I heard many maaaannnyyy fables of how amazing the vada pav outside Kirti College is and how he’s been dishing it out for decades and finally thought I’d kill two birds with one stone. 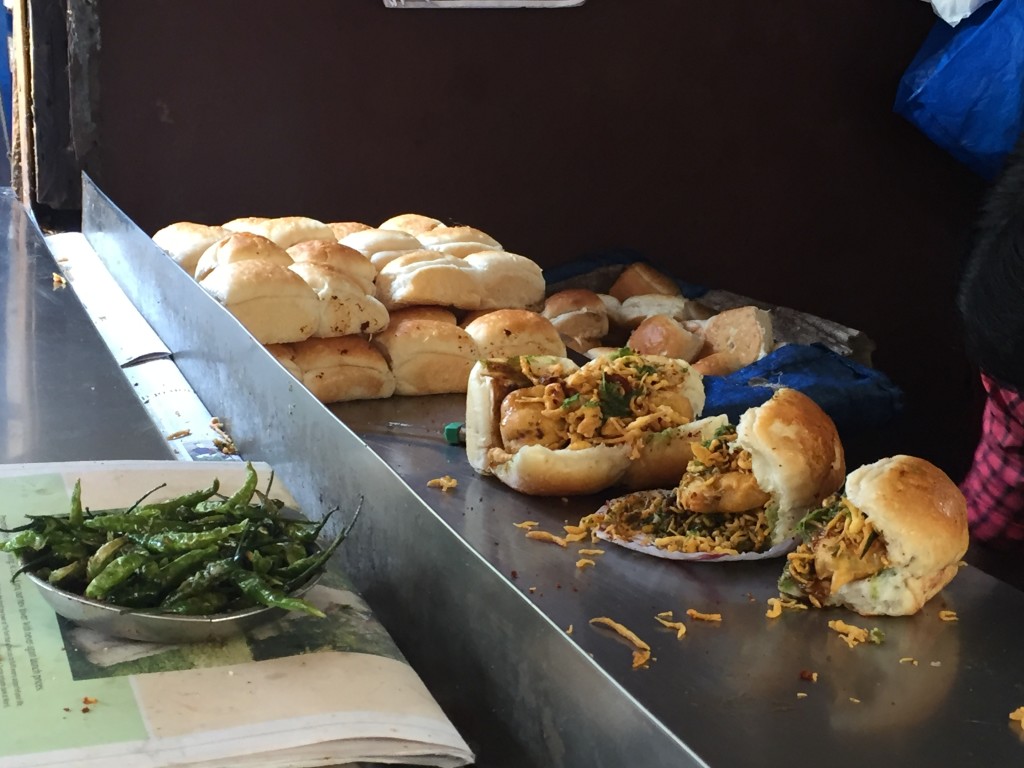 One would think this little Vada Pav stall would have a big sign or would be easily identifiable but when I got there it just seemed so ordinary. It looked like any other street cart, in fact I’ve probably seen more impressive ones. The continuous steady stream of people at the stall however is quite impressive. I got there around 1pm and what seemed like a quiet street with not much happening, even the college seemed shut, this cart was buzzing, churning out pav after pav. 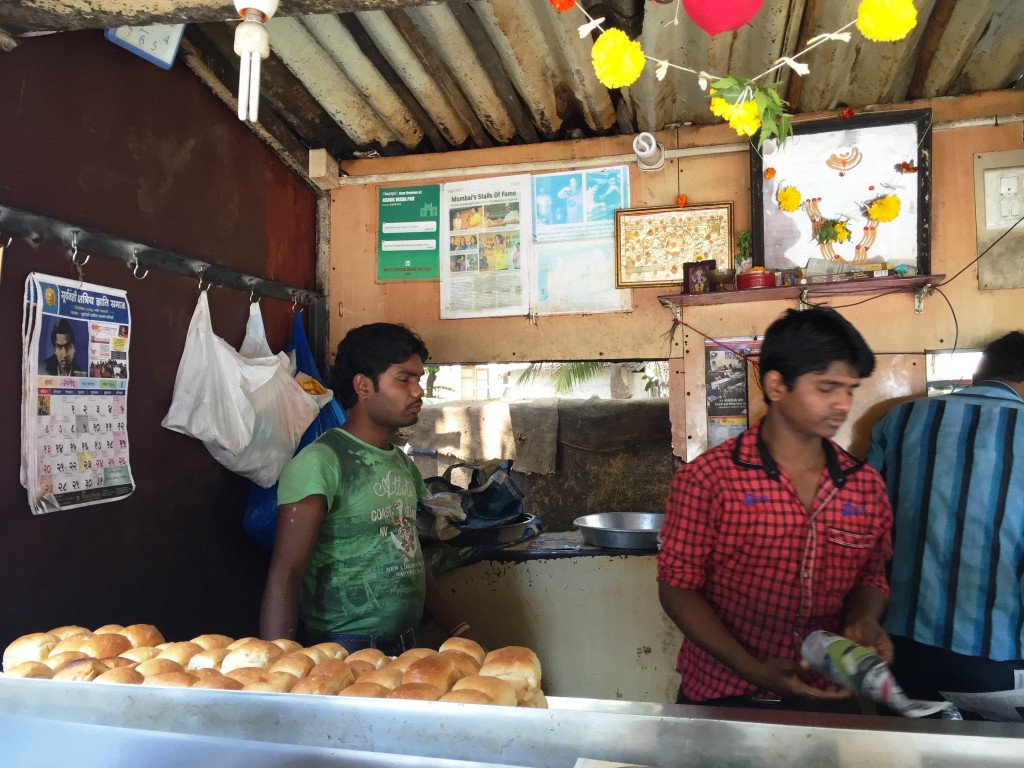 I find it fascinating to see them work and watch little potato spiced vadas being fried in a huge mound of oil, sandwiched inside soft pav that’s been slathered with green chutney, then drizzled with a slightly sweet chutney ( tamarind I think ) and then generously sprinkled with fiery red chilli powder like chutney ( the typical Maharashtriam Lasoon chutney )  and served with plenty of fried churan ( leftover bits ) and deep fried green chilli. A spectacularly delicious combination of calories and fat but oh my lord every single bite was worth it. 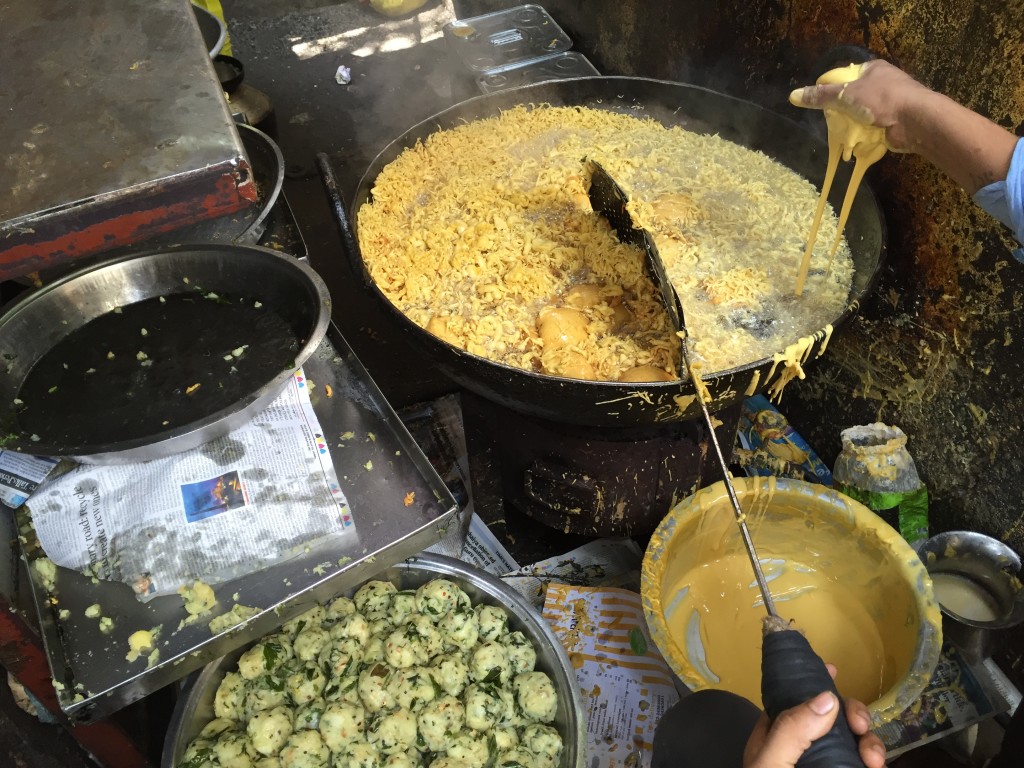 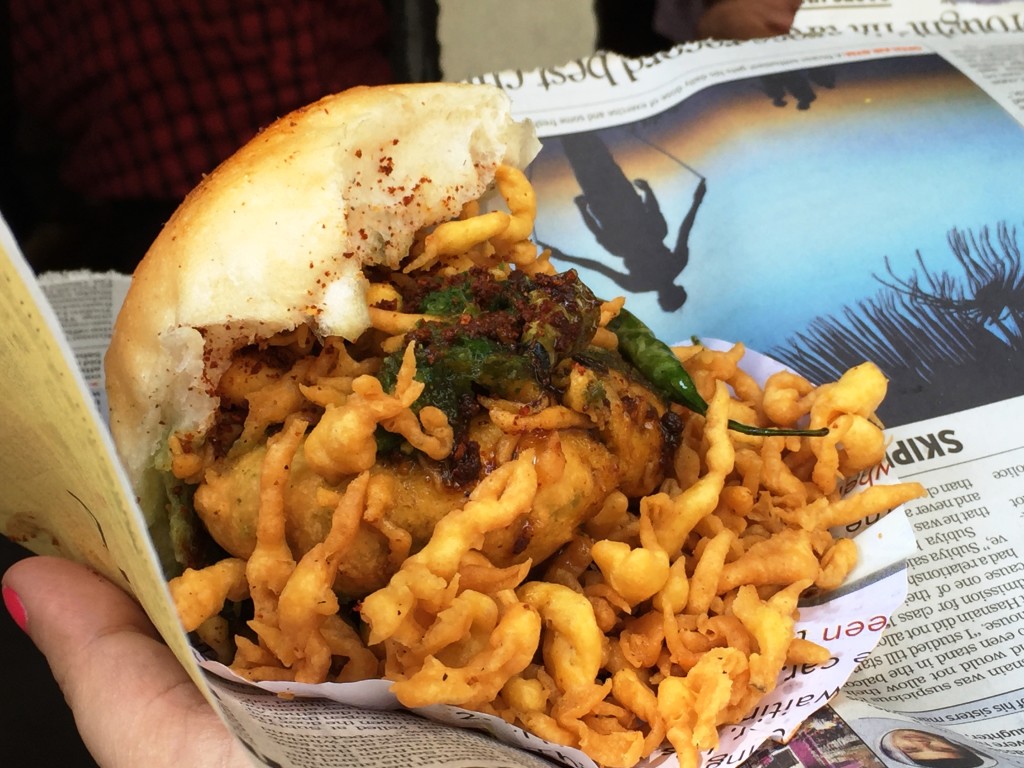 After wolfing down this local treat I struck up a conversation with the stall owner Ashok who’s rather chatty and incredibly entertaining. From a funny lecture about eating in moderation to how people take his vadas to Delhi and Chennai ( he boasts of a large fan base in Delhi ) and how his secret red powder like chutnye has nearly 44 ingredients in it and works wonders when cooked on a piece of chicken. 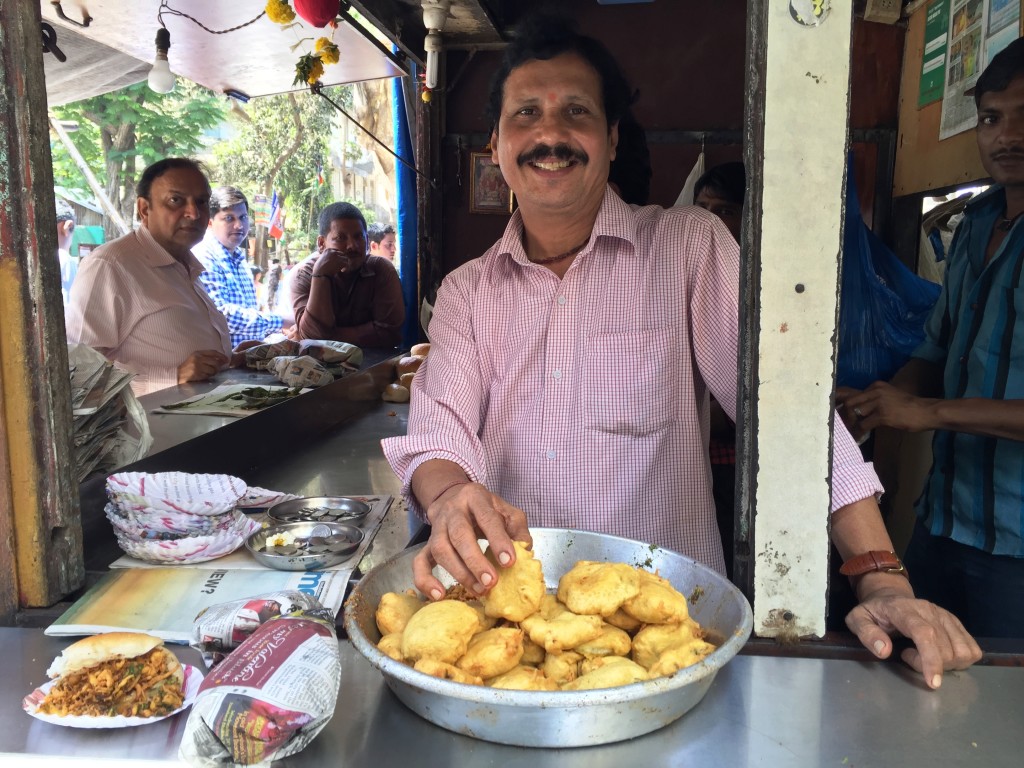 Ashok is hysterical and now my new best friend. I think he found me amusing as I just giggled at all his jokes so much so that I got two free vada pavs packed 🙂 While chatting and watching his little army of boys cook and dish out pav after pav I notice a poster on his cart which says Ab Khao Befiqr with a picture of two vada pavs and a packet of Tata Sampann Low Oil Absorb Besan. I can’t get over why he has this on his cart and since I seem to have struck a rapport with him, I casually ask him in my terribly broken Marathi but most decent hindi. 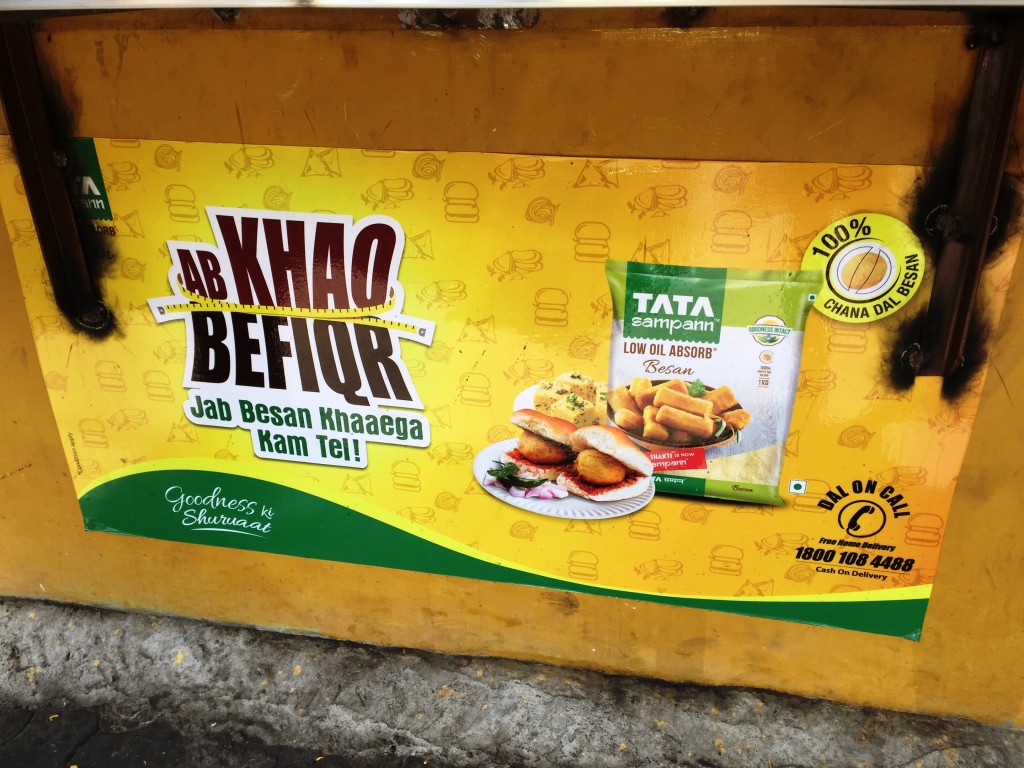 Ashok tells me the company has launched a product that is basically besan or gram flour, essential for a lot of delicious dishes if you ask me, but this particular besan is considered healthier as it absorbs less oil when fried. He assures me he’s been to their factory and he’s in constant touch with the company to understand the product better and goes on to explain that this besan comes from unpolished chana dal. He tells me the brand has tied up with him to use their besan in his vada pavs if people ask for it so they can experience the difference. 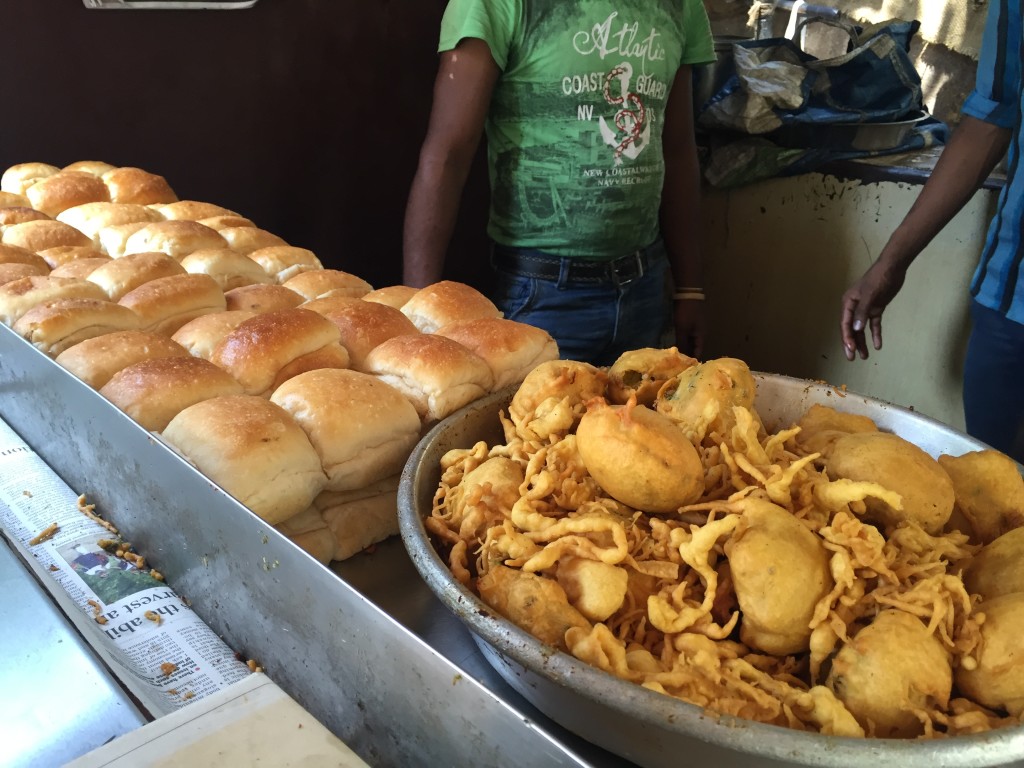 I ask him his preference and he seems to be less interested in the health aspects and believes in his product. Who can blame him? 40 odd years and counting and not a single dissatisfied customer. I’d be pretty cocky too if I was him. However he doesn’t discourage and when I ask for this special besan vada pav he’s happy to feed me. Now please note one pav was a meal in itself for me but I really wanted to see what the fuss is all about. If this is true I’d use more of this healthier besan in a heart beat.  To be completely honest and to me ( I’m really no vada pav connoisseur nor can I get into the intricate flavours of the pav ) it looked and tasted just like the regular one. Between the two I personally see no difference which is amazing because usually healthier food tastes, well, lets just say it’s not as power packed as it’s unhealthy companions but in this case both seemed the same to me.  I mean maybe Ashok likes his better because hes’ partial or maybe the lad’s been eating Vada Pav longer than I’ve been alive so he’s got a firm opinion but to me, just a regular joe that wants to satisfy another unhealthy craving – it’s pretty damn good. Not to mention they serve it in a little paper plate with the same Tata Sampann branding or poster on it. I’m actually very tempted to try some home experiments with this low oil absorb besan, however I’ll wait till I start frying at home to try. ( currently I don’t fry anything ) 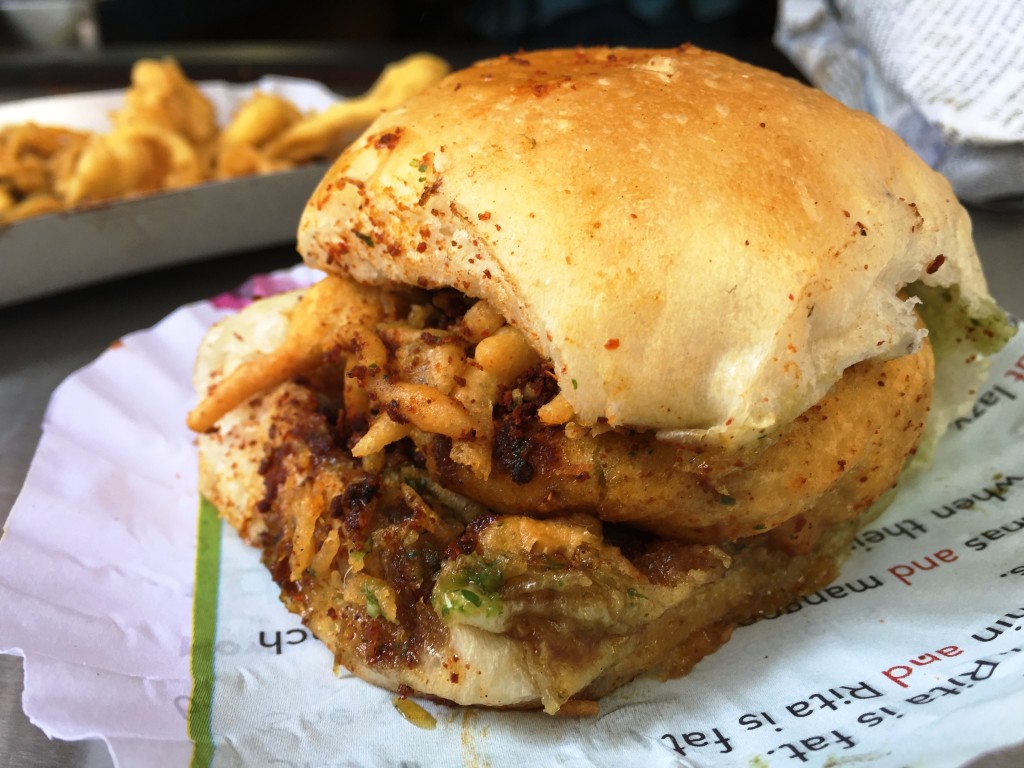 What started off as me giving into temptation and indulging in something I hardly ever do, turned into a rather informative eye opening session and ended in a new found friendship. As my friend Ashok packs my freebies and also throws in some lovely chutney as a bonus I tell him I’ll be back for more but after sometime, after all it was him who told me everything should be eaten in moderation and he of course doubles over laughing waves good bye and goes back to the hungry crowds clamouring for his vada pavs.

It’s A New Year For The Chinese And Hakkasan Is Celebrating!

2 Days In Amritsar With The Taj Swarna Hotel