I haven’t been to Pune in ages and this weekend was a breath of fresh air. I popped into the city for a quick weekend getaway with my sister and for the most part lounged around in our gorgeous hotel the Hyatt Regency Pune. You can’t blame us, it’s ferociously hot outside with the temperature crawling up to 40 degrees so besides a very successful shopping trip and the mall next door, we pretty much ate at the hotel and stayed indoors like little princesses. 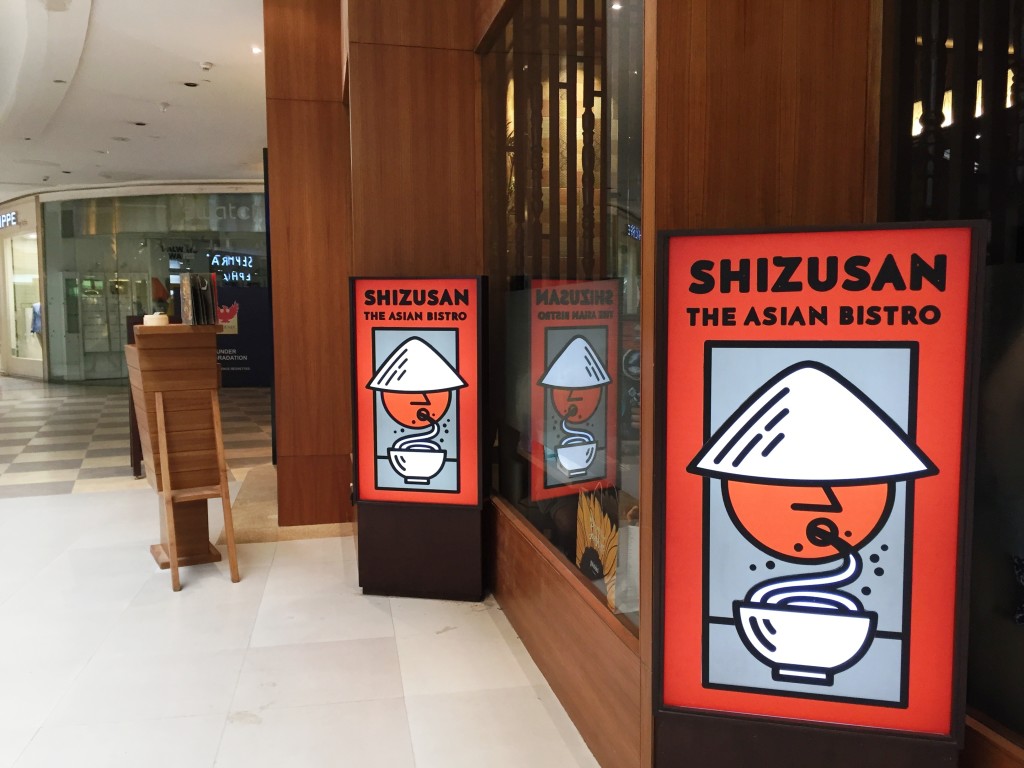 Since I hadn’t been to Pune in ages, a city I’m extremely familiar with and have a deep intense love hate relationship with, I didn’t know what the fun new places to eat at were. Pune is much like Bombay when it comes to it’s dining scene. Things open up with much noise and fanfare and then die a swift painless and extremely quiet death. It’s hard to pick a restaurant but with a little nudging we landed up at a restaurant called Shizusan ( I LOVE the name and can’t stop saying it, I’m a five year old that discovered a new word ) inside the popular Phoenix Market City mall. 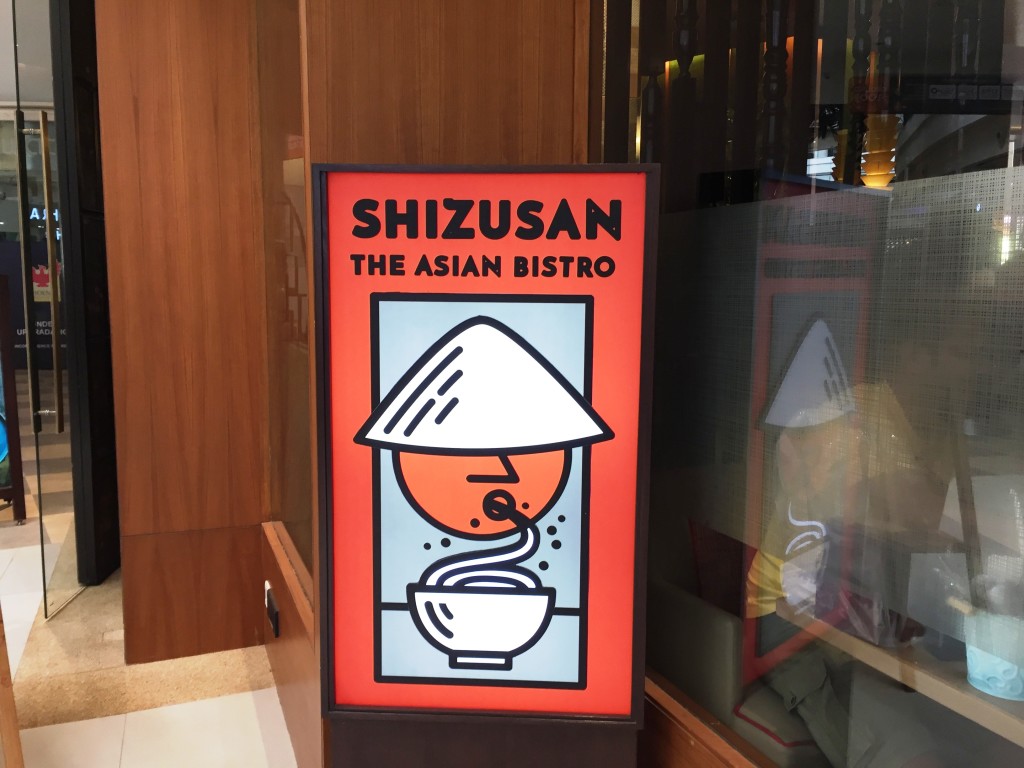 Now I heard about this place, all the local bloggers and press had covered it but I’m horribly opinionated so I don’t trust anyone except myself. Thankfully it’s not one of those restaurants that got lost in all the noise and seems to be quite popular judging by the crowds trying to get in on both days mind you. 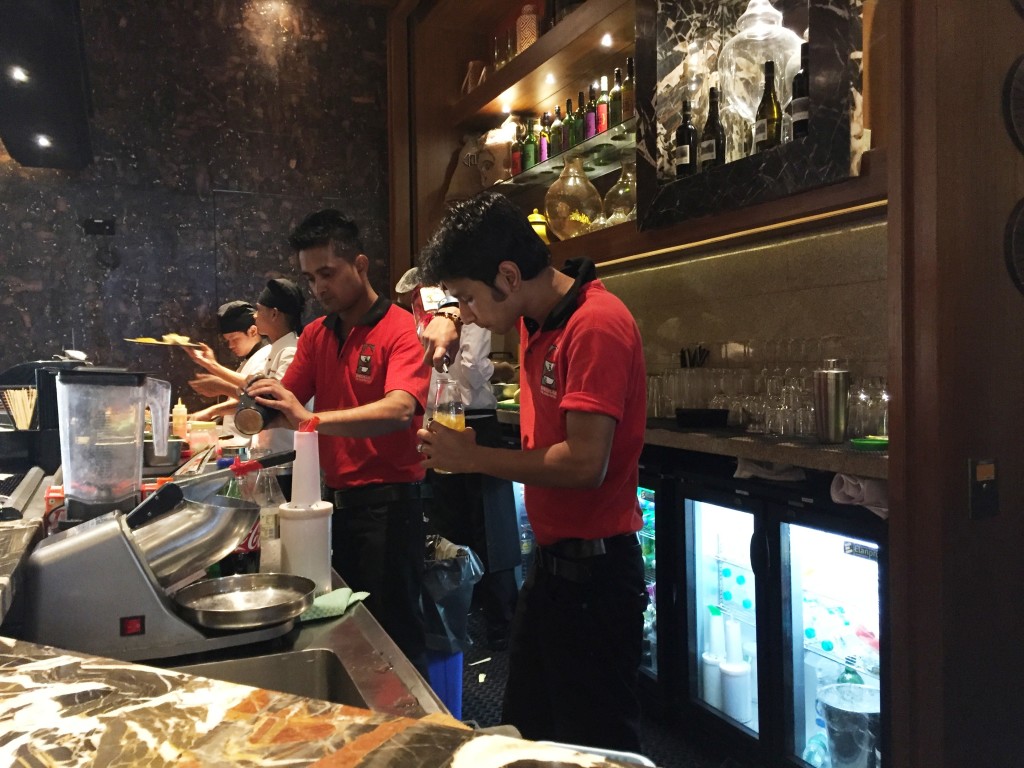 Shizusan is not a large space neither is it small, I’d call it cozy. It does tend to get noisy but that’s because I think the approach here is more casual and the cutlery in a community bowl on the table instead of being laid out and the quirky cartoon like designed menu is a dead give away that this place is not uppity or fancy but just happy to feed you. 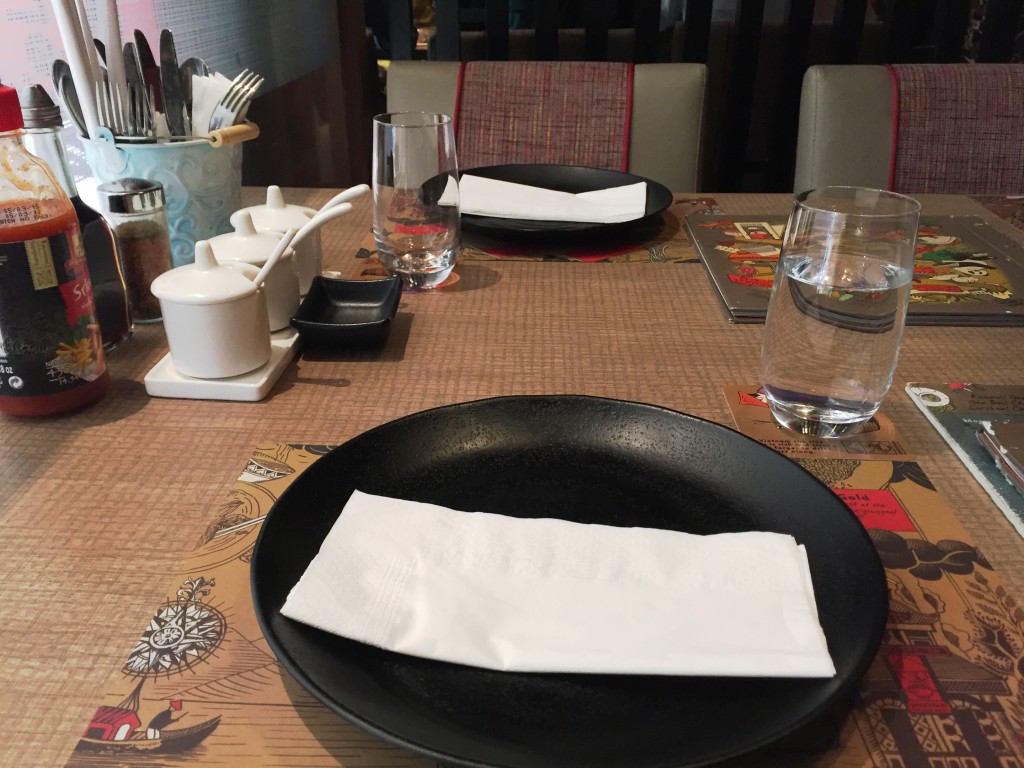 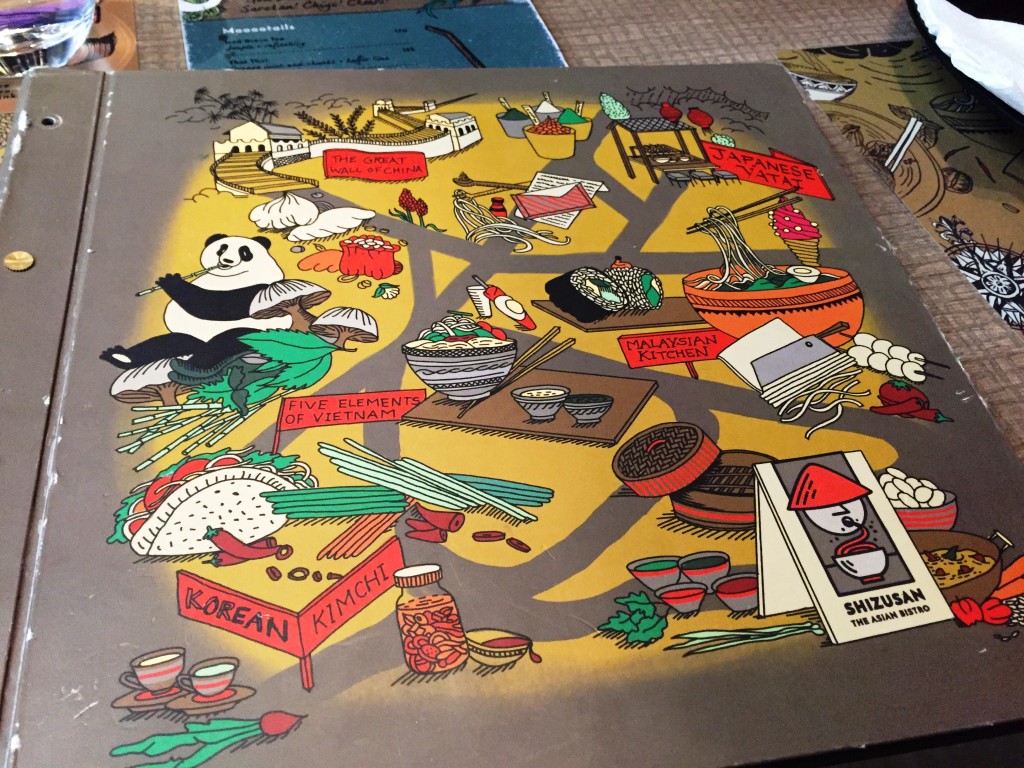 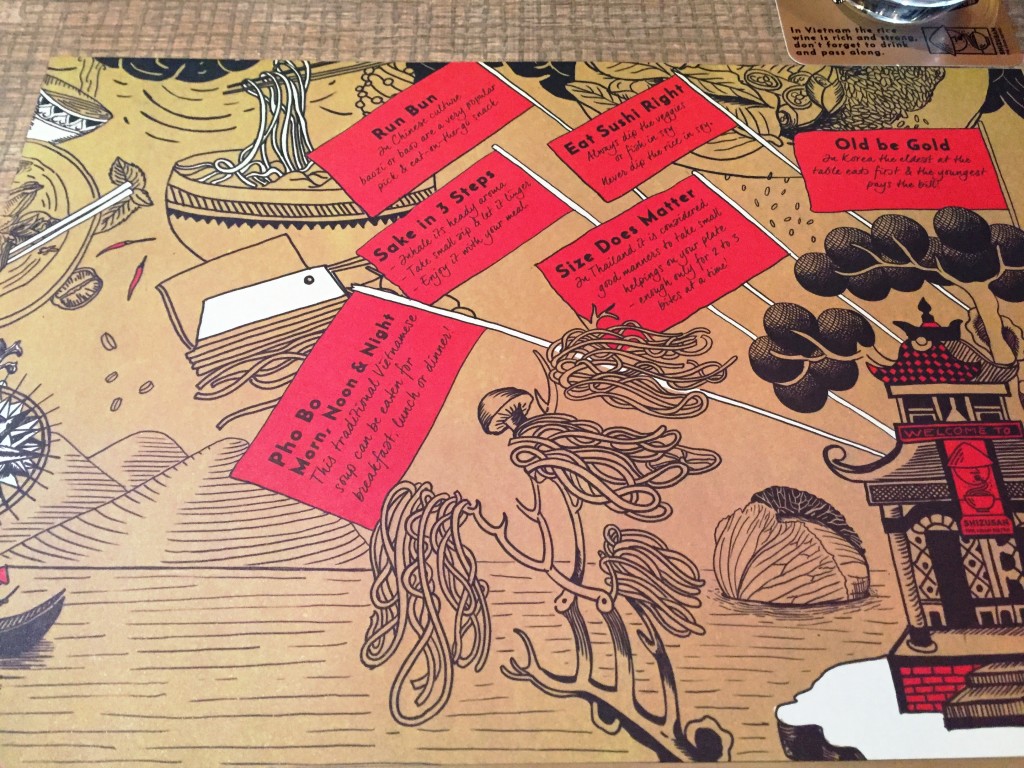 Terribly hard to write a review in it’s traditional sense because I was so hungry I inhaled my food and for the most part I was too busy focusing on taking good pictures and uploading on snapchat! ( it’s my latest obsession). I will say this though, all their dimsums are just smashing. They serve four pieces per plate which is better than three but not as great at six ( yeah yeah, I know I’m pushing my luck ). Four is actually great because if you’re a table of four everyone gets one and you can sample more. The Prawn based ones are beautiful specially the Har Gau and the Prawn and Chicken and Prawn and Chive. The Water chestnut and the other two Mushroom dimsums in the vegetarian menu are perfect. I like that their dimsums aren’t heavy on their wrapping and in fact the portion size for the filling inside is generous. I know because towards the end I couldn’t finish everything and ate the dimsum sans the wrappers! 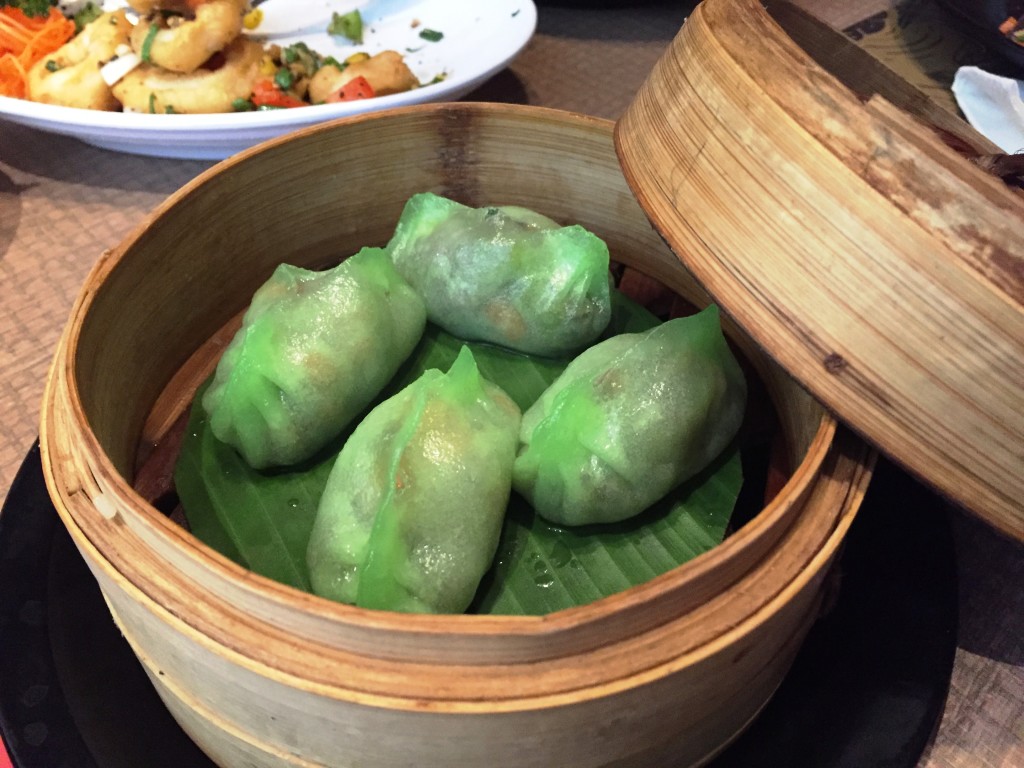 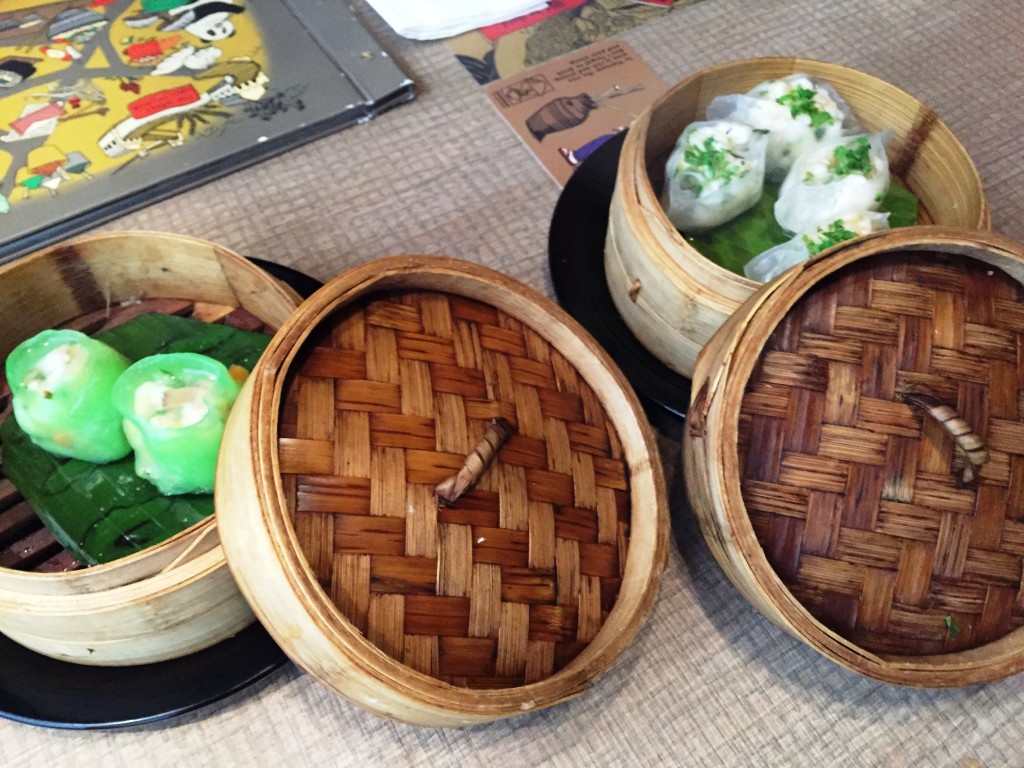 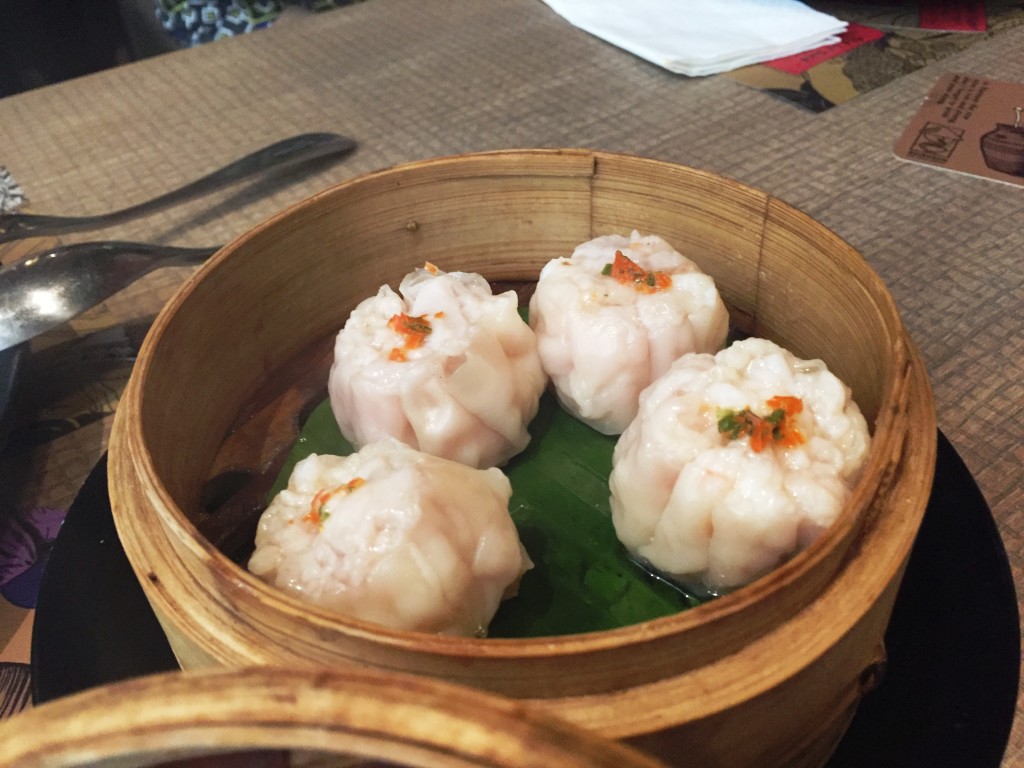 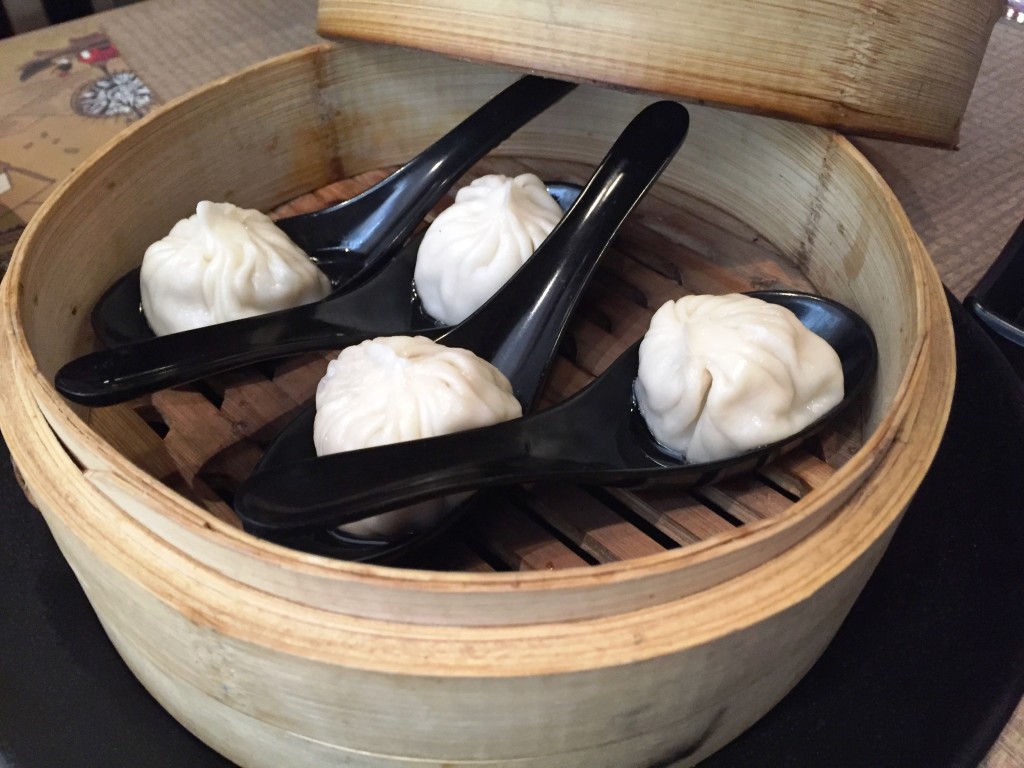 The Thai Papaya Salad is enjoyable however not what you get in Thailand for sure. I had second and third helpings but in hindsight I’d have liked it sliced a little finer or thinner. I always feel the way you cut vegetables make a difference in the way they taste but my parents think I’m insane. I still stand by that thought. 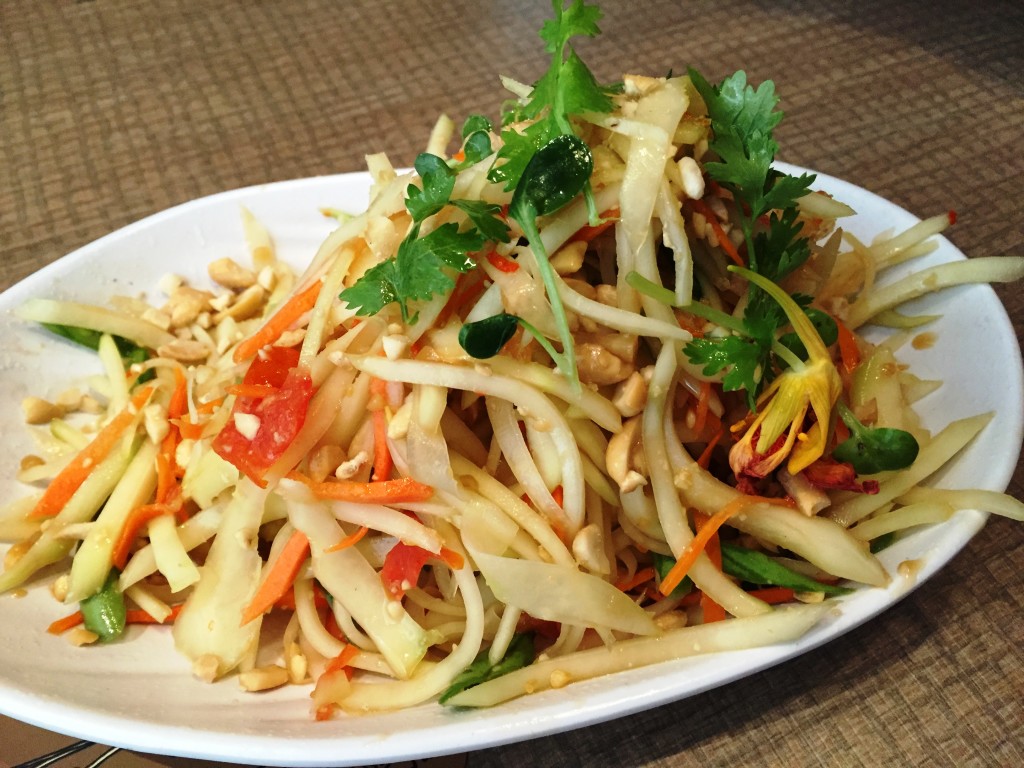 The Biggest let out at this meal is their spicy lotus stem which felt like a stodgy dish, the lotus root wasn’t crispy, I think over cooked a tad bit and that spice is oily and heavy and reminds me of one of those Indo – Chinese meals. Meh. Avoidable. 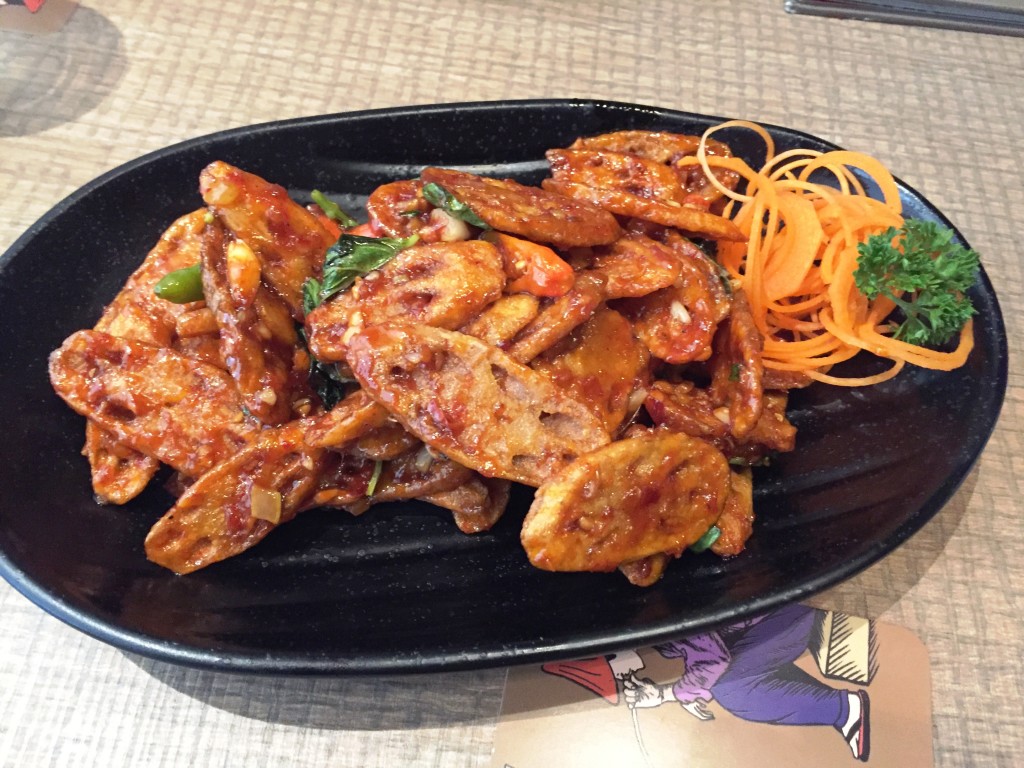 I didn’t have much sushi except for some sashimi which was pleasant but I’d order more dimsum and skip the sushi next time, that was the star of the meal ( for me at least and I’m also extremely partial to dimsum I will choose that every time ). 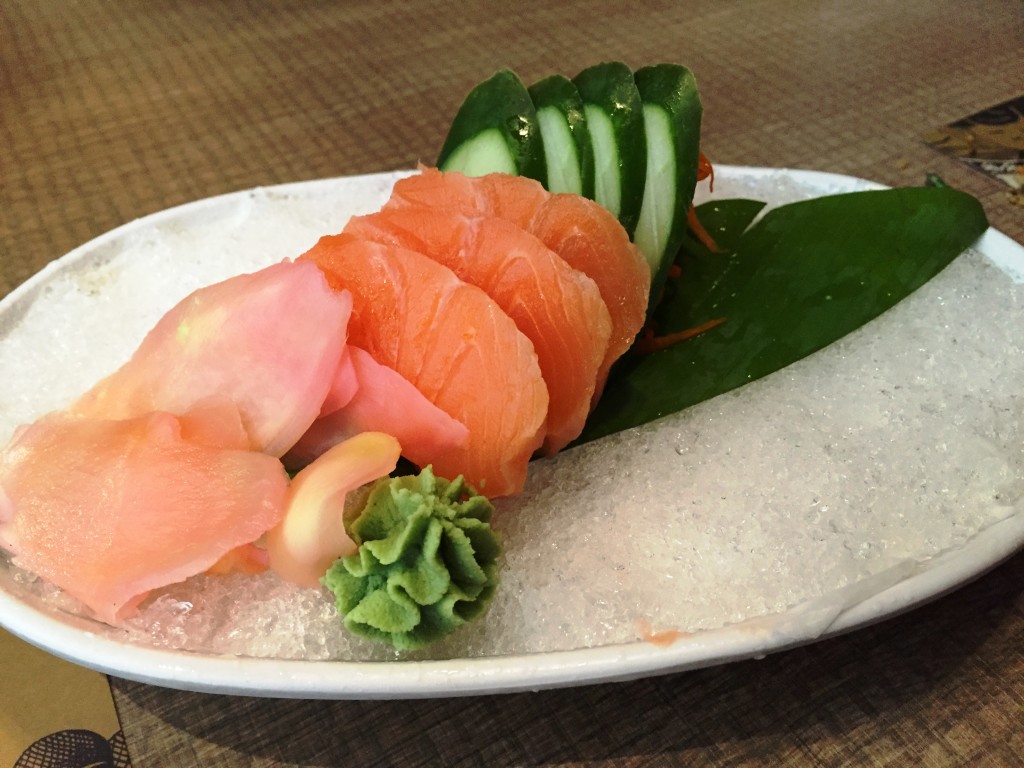 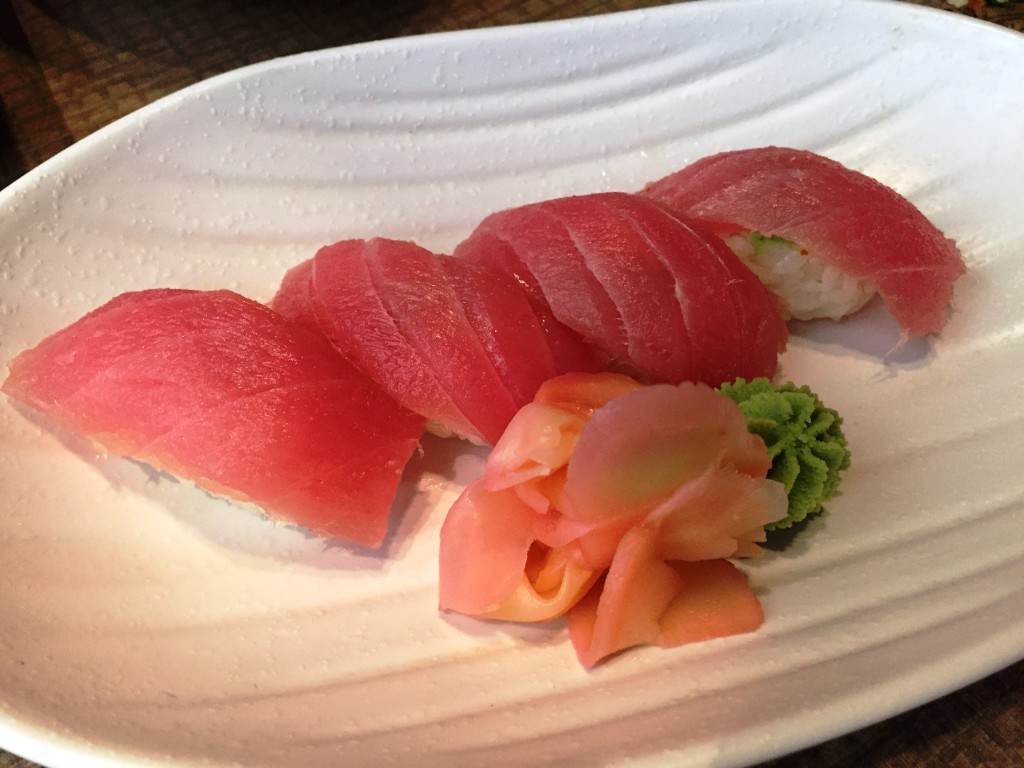 The Rock Shrimp Tempure is wonderful. It’s light, fluffy, cripsy and full of delicious prawn meat but that sweet spicy orange colour mayo like sauce that’s drizzled over it is not pleasant. I wish they would serve it on the side instead of smearing it over then I can choose to eat it or opt for their far better dipping sauces served on the table.

The chili garlic squid and fish were spot on. I love the little chopped peppers and greens that it comes garnished in. 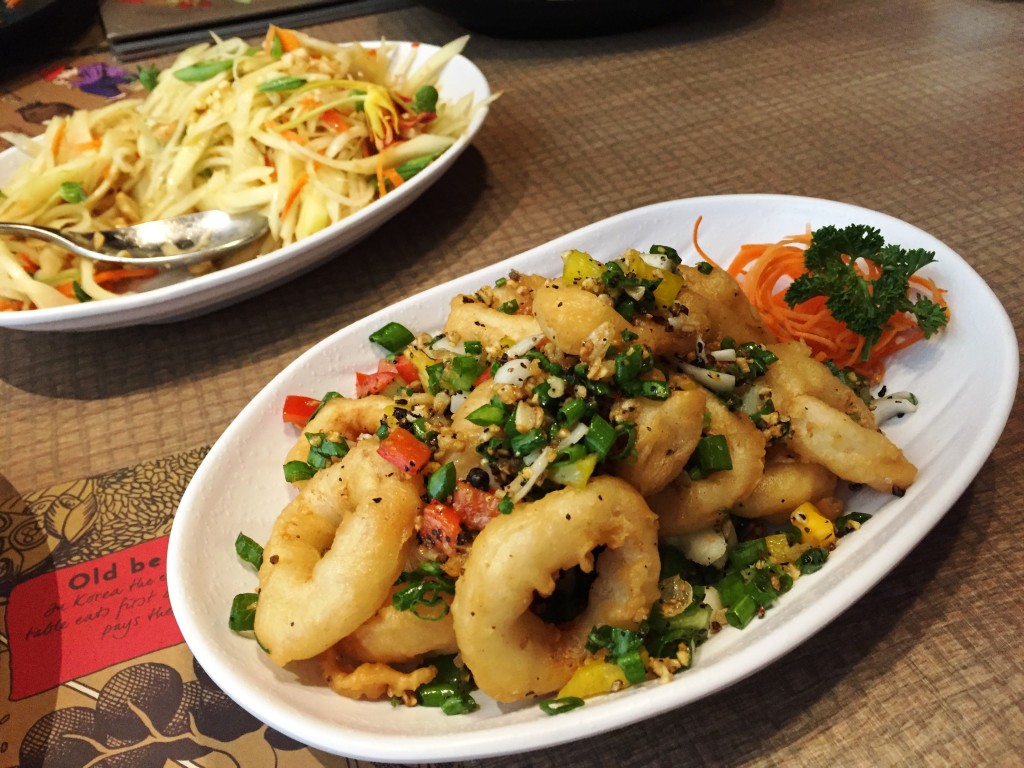 The focus was more on small plates and dimsum so we could try more but my lord that in itself is a heavy meal. The menu inclues baos, large plates, lots of sushi, and dessert but it will take another trip to Pune to do justice to the entire menu.

Why The Westin Resort & Spa Pushkar Is An Ideal Getaway

Things To Do In Cochin

Summer Destinations You Must Explore !