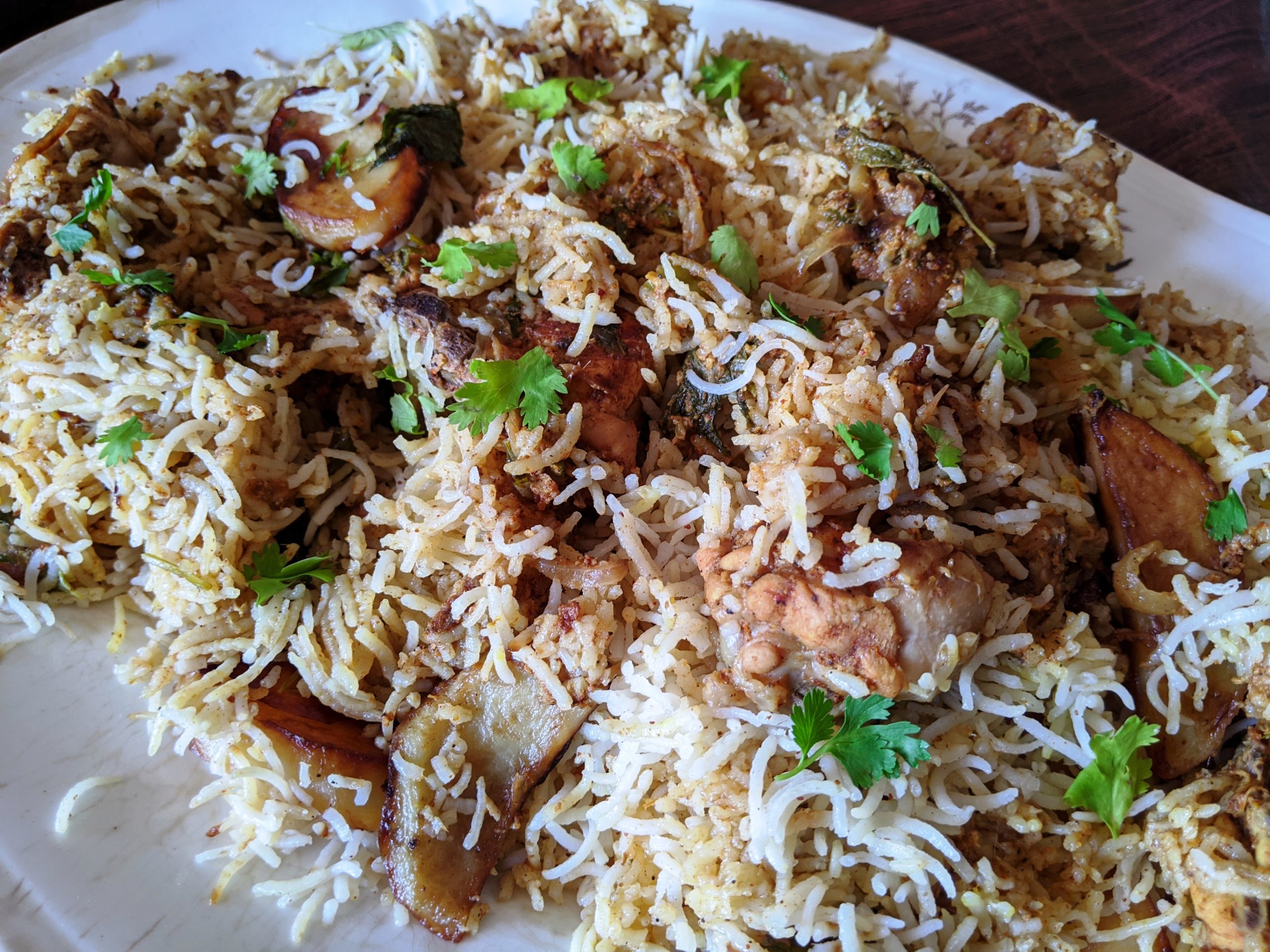 Last week I posted a picture on Instagram of my Chicken Biryani and was so taken aback by the response and the number of messages asking me for the recipe that I realised I had to write a blogpost. So this is my recipe and I need to state clearly that this is MY version of a Hyderabadi style chicken biryani. It’s most certainly not authentic and it’s an amalgamation of several recipes I’ve followed along with plenty of short cuts but I do believe that it is delicious and worth the painstaking effort a biryani demands.

What is a Biryani? What are the origins of a Biryani?

Biryani is a dish of mixed rice and meat cooked in fragrant spices or aromatics. This combination of rice and meat is originally a Persian creation that travelled to India with the Mughals and has been tweaked and adapted into several versions depending on the geographical location. The truth is, in India there is no singular recipe for a Biryani. Each region has their way of preparing it and is universally loved.

Types Of Biryani in India

Almost every state in India has their own style or version of a Biryani. People who grow up eating a certain type of Biryani will always prefer it to another style and it’s always leads to either great conversation or controversy.

Hyderabadi – This biryani is my personal favourite. It uses a lot of spices and has bolder flavours. Common ingredients are saffron, cumin, peppers, cardamom, cinnamon and ample use of mint coriander and green chillies. You’ll sometimes find a potato in this biryani but usually it’s just the meat and rice. In Hyderabad the popular accompaniment is Mirchi ka Salan.

Lucknowi/ Awadhi – This biryani that lucknow is famous for is also called an Awadhi biryani. Here the emphasis is on fragrance and aromatics. It doesn’t have many spices and instead uses ingredients like Kevda, Rose water etc. Saffron is also an important ingredient for this biryani. It’s often referred to as a clean biryani because there is no whole spice left in the biryani. Things like pepper or cinnamon sticks or any whole spices or even fried onions are strained out to ensure that the biryani is flavourful but none of these are left behind.

Kolkata – The biryani in Kolkata is far easier to make and less cumbersome than the Hyderabadi biryani. It’s almost similar to the Awadhi biyani with the inclusion of a boiled potato that cooks with the meat. Here the potato is an integral ingredient and the biryani is incomplete without it.

Mopalah/ Thallasary – This biryani is a speciality for the Moplah community in Northern Kerala. It is an amalgamation of Arabic influences in Malyali food and even this Biryani recipe tends to get tweaked from region to region within the state.This is a milder and more fragrant biryani compared to other South Indian biryanis and uses tomatoes, dry fruits and sometimes even date chutney giving it a sweet and tangy flavour.

There are other types of biryanis but these are some of the popular ones.

What Is The Difference Between A Biryani And A Pulao ?

While both are rice preparations that originated from Persia, the difference is in their cooking technique. Biryani uses the draining method where the rice is cooked in water and then drained out. The rice and meat are cooked separately and then assembled together. In the case of a pulao the absorption method is used where only enough water is add so the rice completely absorbs and soaks up all the liquid. Here the meat and rice is cooked together at the same time. It’s the classic example of a one pot dish.

Is There Such A Thing Called Vegetarian Biryani Or Is It A Pulao ?

Since this dish originated in Persia and has evolved through the mughals, Biryani is always associated with meat. So most believe that if there is no meat with the rice that’s been cooked together then it’s not a biryani, it is a pulao. The truth is that there are several vegetarian biryanis and if it’s cooked with the draining method and not the absorption method then technically it is very much a biryani saans the meat. Staunch biryani snobs will turn their nose up at a vegetable or Paneer (shudder) Biryani, however there are plenty of folks that relish it.

A Pinch Of Saffron

Wash and rinse the rice two or three times and let it soak for a minimum of 30 minutes.

Heat the milk and add the saffron to it. Keep heating it till the milk turns yellow in colour and let it rest. This saffron milk is to help give the biryani another colour. You can use this or instead red or yellow food grade colour or in fact both.

Deep fry the sliced onions till they turn crisp. The fried onions or Birista will be used in the marination of the chicken as well as when you layer the biryani.

Slice the potatoes and fry them in a pan till they turn crisp and set aside.

Marinate the chicken in Yogurt, ginger garlic paste and all the spice powders. Add some chopped coriander and mint leaves along with a handful of the crispy fried onions. Mix it all well and let it sit for a minimum of half an hour. (Ideally use this time to fry the potatoes)

Take a large crockpot and add the chicken and the marination and start cook the chicken. It needs to cook for a total of 25 minutes so after the first 15 mins, while it cooks you can get started on your rice.  The chicken as it cooks will release water and slight gravy which is commonly called Jhol. Don’t be alarmed, this is great for the biryani. It’s this jhol that gives the biryani colour and flavour.

In another pot add water along with salt, cumin powder pepper and garam masala powder and let the water come to a boil. Once it comes to a boil add the soaked rice and let it cook till it’s about 70- 80 % cooked. Usually takes about 6 – 7 minutes once the rice has come to a boil.

Once it’s cooked, drain the rice and then start to assemble the biryani.

Now at this stage the chicken has cooked for about 20 minutes. It will continue cooking on dum ( or just cover it with a lid like I did ) for another 10-12 mins along with the rice. Add some of the potatoes into the chicken. Garnish with some of the fried onion, mint leaves and coriander.

Add a layer of rice on top. Add the remaining potatoes, onions, mint leaves and coriander on top.

Drizzle that milk soaked with saffron all over the rice. Cover well and cook for another 10 mins. It needs one minute on a high flame and then on a slow flame for the other 10 mins. Once it’s cooked switch off the flame and let the biryani rest for 5 minutes.

Now the way you serve the biryani is important. I would recommend slowly fluffing the rice from the sides and emptying it layer by layer into a flat platter to serve. Do not dig your spoon right inside it tends to break the biryani. This way you’re able to get all the layers, flavour and rice and meat.

Eat the biryani with an accompaniment of raita, kachumbar or even mirchi ka salan.

How do you serve a Biryani ?

Honestly, this is just as important as the actual recipe. Many people make the mistake of just digging a spoon into it to scoop it out but the truth is all the flavours and trapped at each layer and needs to be gently combined. Ideally you need to take a flat edges spoon not a curved one and gently as they say, “open out” the Biryani. Start by emptying the top layer on a platter and then by gently fluffing out the sides of the biryani. This way you’re able to serve all parts of the biryani and it mixes nicely.

Who makes the best Biryani ?

It’s a question I’m often asked but I do believe it’s a silly one because this is subjective. People who grew up eating Biryani in Hyderabad swear by it while those in the North adore an Awadhi style one and turn their noses up at a Bombay or Thalassery Biryani. The truth is they’re all delicious, it just depends which style you take to.

What Is The Main difference between a Hyderabadi Biryani and a Lucknowi Biryani?

Apart from the fact that one is made in Lucknow and the other in Hyderabad, these two are the most popular types of Biryani but are different in terms of flavour and the ingredients used. The Hyderabadi biryani does not use Kevda or Rose water or any type of fragrance but the Awadhi biryani does. There are more spices used in a Hyderabadi biryani while the Awadhi one uses more aromatics and is more fragrant. The flavours are delicate in a Awadhi biryani and more robust and spiced in a Hyderbadi one.

A Day At The Deltin