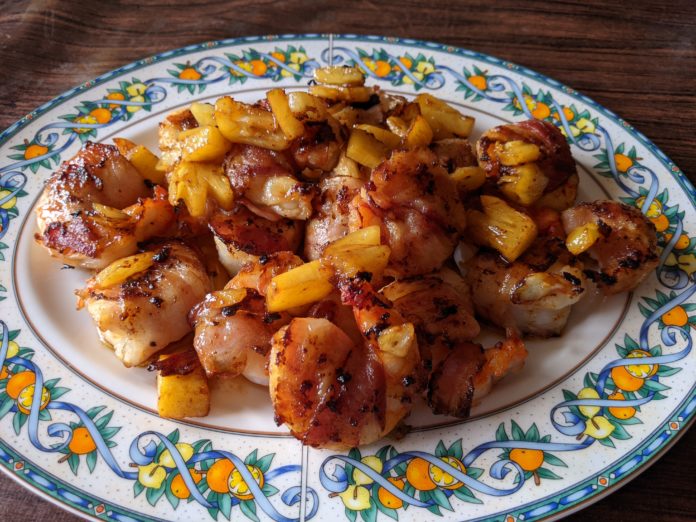 I’ve had such a love hate relationship with Bacon Wrapped Prawns which is ironic considering I love both ingredients – bacon and prawns. I think it’s because I’ve had some really lackluster ones at restaurants in the city – I don’t know how they can butcher such a simple recipe but it’s been done. I think most joints over cook the bacon or perhaps use some substandard quality – either way I’d always order this dish with great trepidation.

I threw a surprise brunch for my sister’s birthday this year and one of the dishes I was recommended to include while planning the menu was bacon wrapped prawns. I thought it will be a crowd pleaser even if I don’t care for it and agreed to have it on the menu. I’m thrilled with that decision because not only were they the best bacon wrapped prawns I’ve ever eaten (Thank you Gallops in Mumbai and Yajush for recommending them) but it was such a hit at the party we just kept ordering it.

These were different from the usual bacon wrapped prawns as they included pineapples and while I’ve seen recipes online that include pineapple, I hadn’t actually had this before. So, this recipe is my homage to Gallops and their fab prawns and now I don’t think I can eat them any other way!

What Is Bacon Wrapped Prawns?

Season the cleaned prawns with the paprika powder and mix it all together. I don’t use salt as the bacon is very salty and adds its own flavour. I also don’t add any other seasoning but you can – pepper, cumin, chilli powder all work well.

Take an individual prawn pieces and one rasher or strip of bacon and wrap the bacon around the prawn as best as possible and the end bit or seam side down, place it on a plate. Continue to wrap all the prawns with bacon.

My tweak is to add a piece of pineapple to the prawn while wrapping it in bacon, so if you like add the pineapple pieces or wrap just the prawn with bacon. Prep all your prawns and keep aside on a fresh plate.

Heat your non-stick pan or skillet till it’s reasonably hot and then place your prawns in the pan (again seam side down so it doesn’t open up) and let the prawns cook for a total of 6 maybe 7 minutes. If the pan is nice and hot it will get a nice charred grilled colour and you can flip the prawns half way through. Make sure they char well on both sides.

Please note you do NOT need to add any oil or butter as the bacon will release it’s own fat and that’s plenty to cook the prawns in.

Once the prawns are cooked you can serve them hot or add an additional pineapple glaze to them like I did.

In the pan with all the bacon fat leftover add some more pieces of pineapple and cook in the fat for about 3-5 minutes. Add 2 or 3 teaspoons of honey and cook for another 1-2 minutes. Drizzle the glaze and pineapples over your cooked prawns and serve hot!

Can I Freeze or Re Heat Bacon Wrapped Prawns?

No freezing or re heating bacon wrapped prawns is a bad idea. This is ideally best served fresh off the pan nice and hot. The cooler it gets – it’s just not as much fun and it doesn’t re heat well.

How Do I Serve Bacon Wrapped Prawns?

You can serve Bacon Wrapped Prawns any way you like. It makes for a fab starter or appetizer and works well with a side dip even maybe hung curd or sour cream based dip. You could also serve the pineapple glaze on the side to dip the prawns in as well.

New South Wales On My Plate

Can There Be Such A Thing As Healthy Vada Pav ? A Story Of...