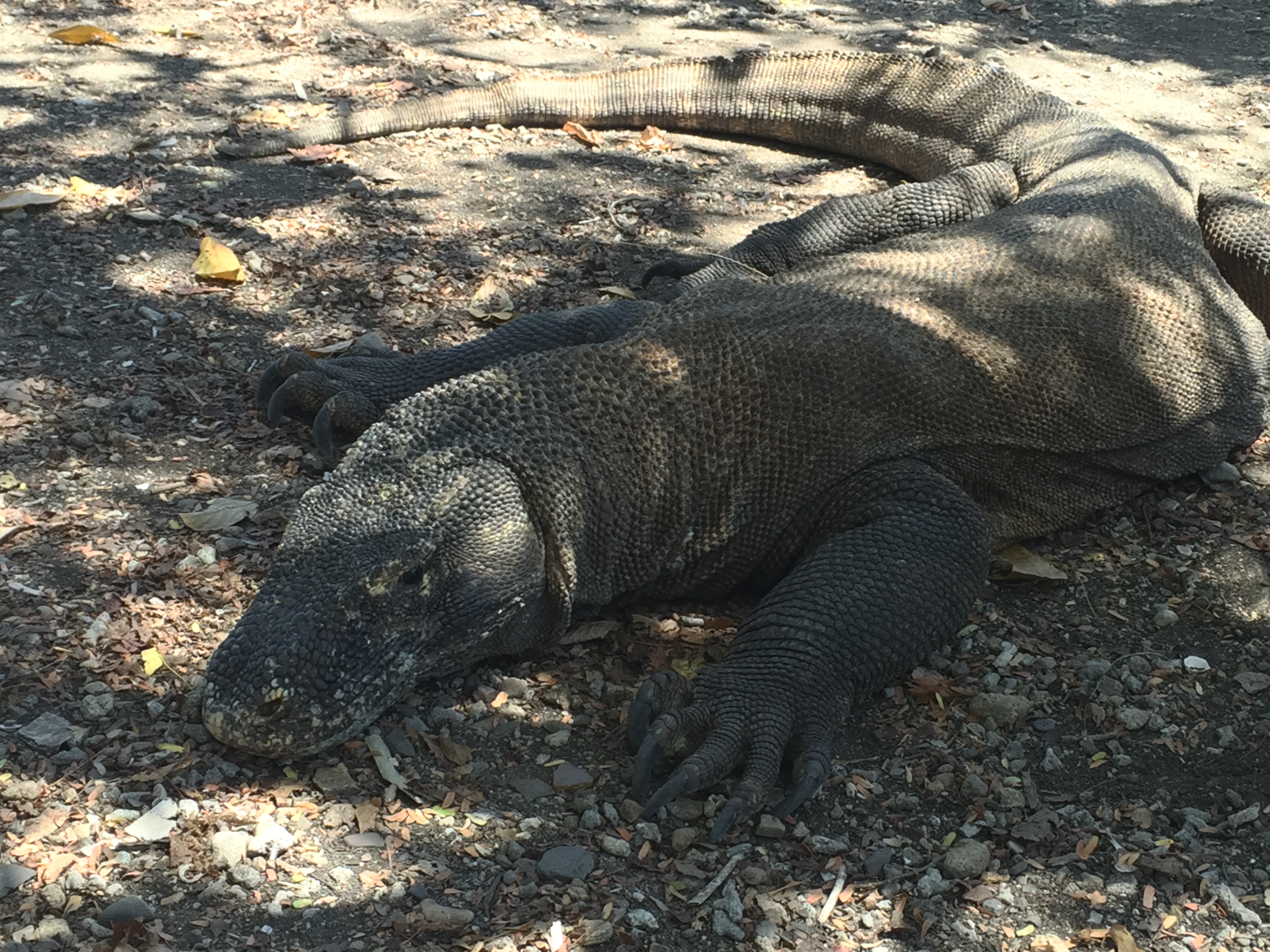 ” You’re going to see the Komodo Dragon!!! You’re so lucky !” squealed a friend when I first mentioned what my trip to Indonesia entailed. I must admit I was curious about these creatures I’d heard so much about but this ear piercing level of excitement and enthusiasm wasn’t my first reaction. I’d seen a Komodo Dragon before in a zoo in Singapore and to be honest despite the fact that I was practically repulsed at the sight of it, to me it didn’t really count as seeing the reptile as it wasn’t in the wild.  So unlike my friends extreme excitement, I found myself eagerly anticipating this tryst with the dragon.

Don’t let the name scare you, the Komodo Dragon is actually a large, possibly the largest lizard alive. It might look fat, scaled and lethargic but make no mistake the reptile is swift when he wants to be, can swim in the sea and can be lethal. They’re carnivorous and even though they’re favourite prey is the pretty Timur deer, they have been known on rare occasions to attack humans. Their saliva has intense bacteria and one slick of his tongue can be fatal. 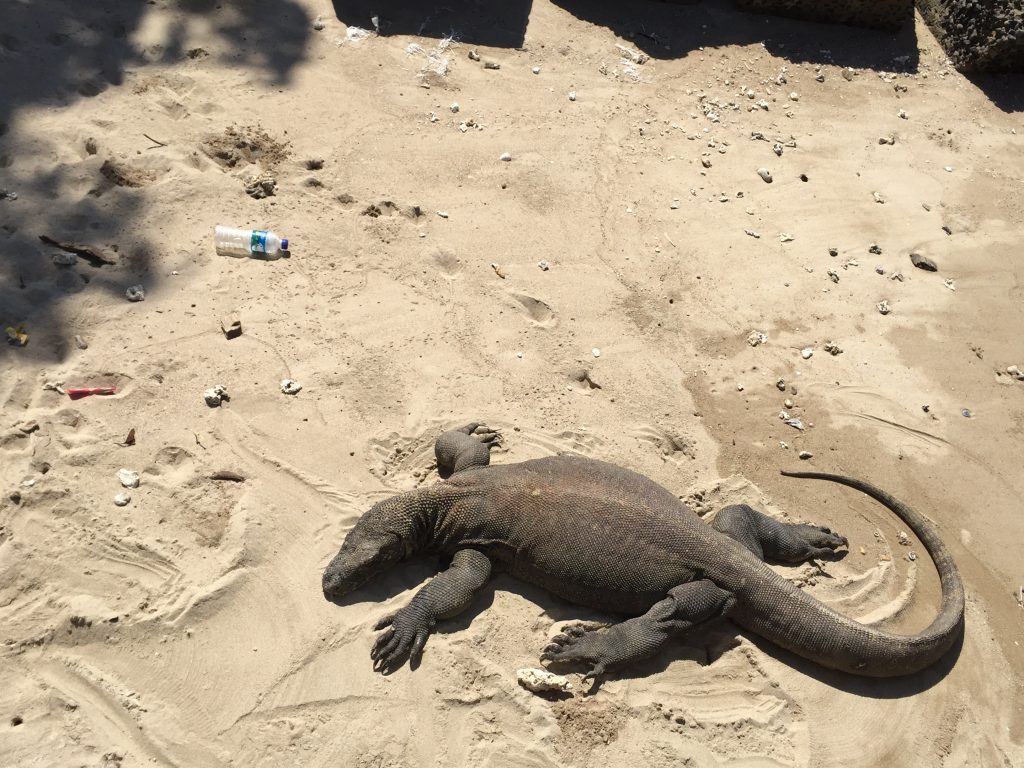 The best part about these dragons are that they are only found in Indonesia among a few islands like Gili Montang, Flores, Komodo and Rica and to get to these islands you need to take a boat ride ( approx 1 -2 hours long ) and get to one of these islands which is home to the Komodo National Park. The beauty of this park is that there is no vehicle to sit in but instead you walk on specific trails through the island and it’s forest till you finally come to the beach and along the way look out for dragons. 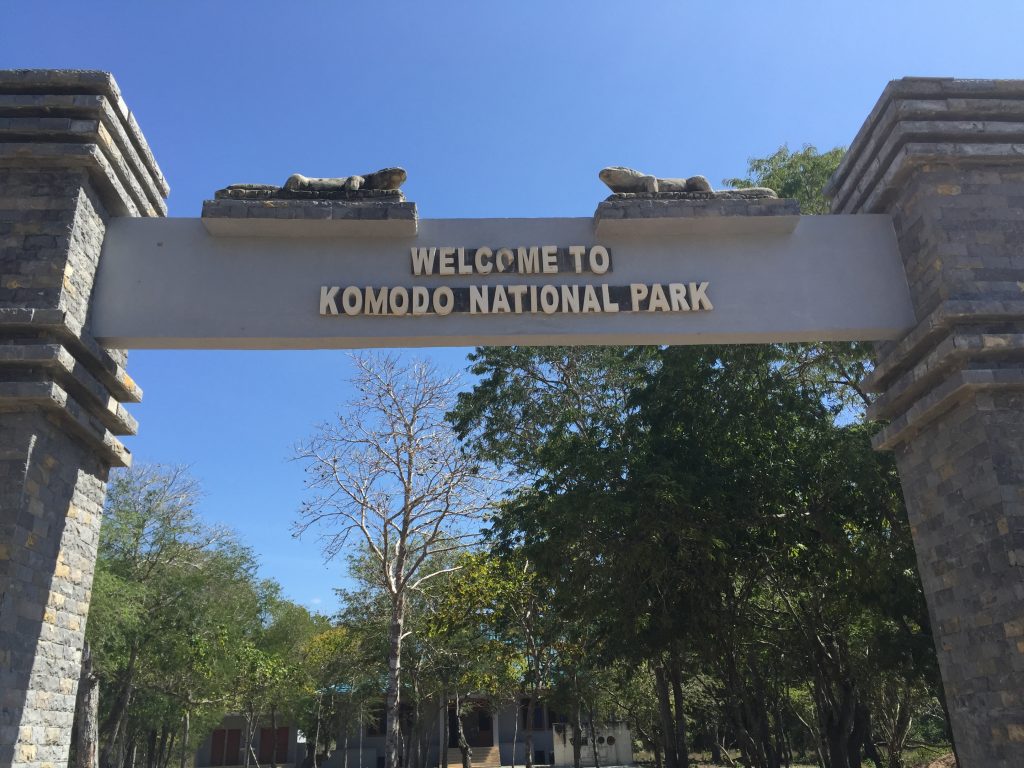 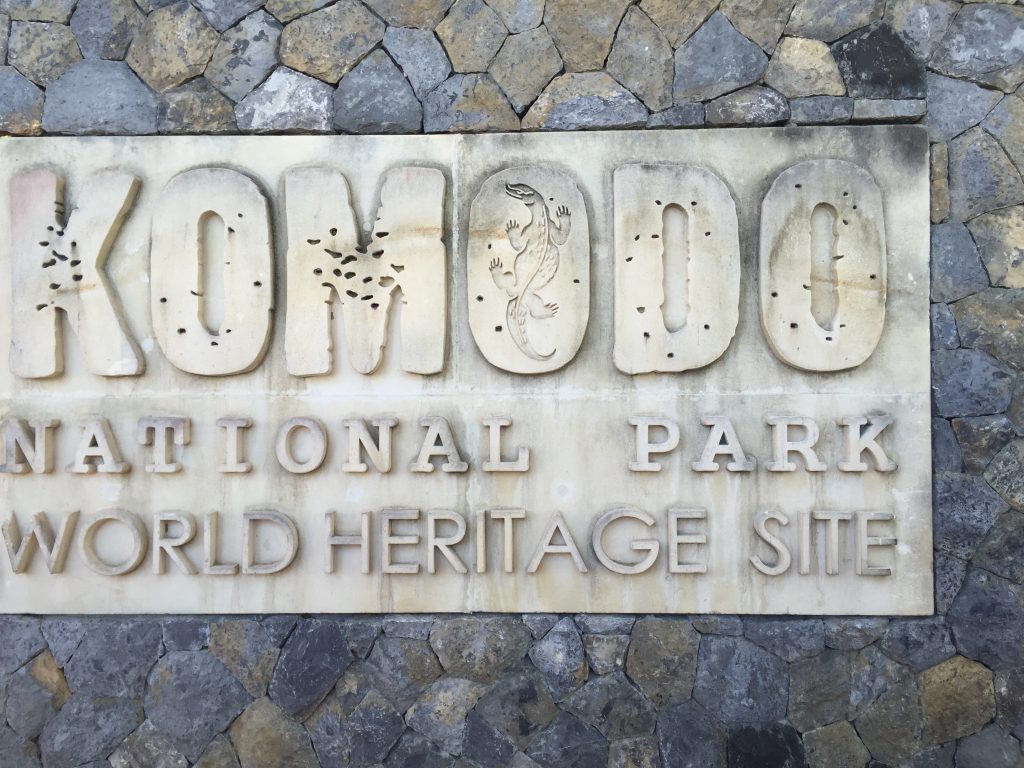 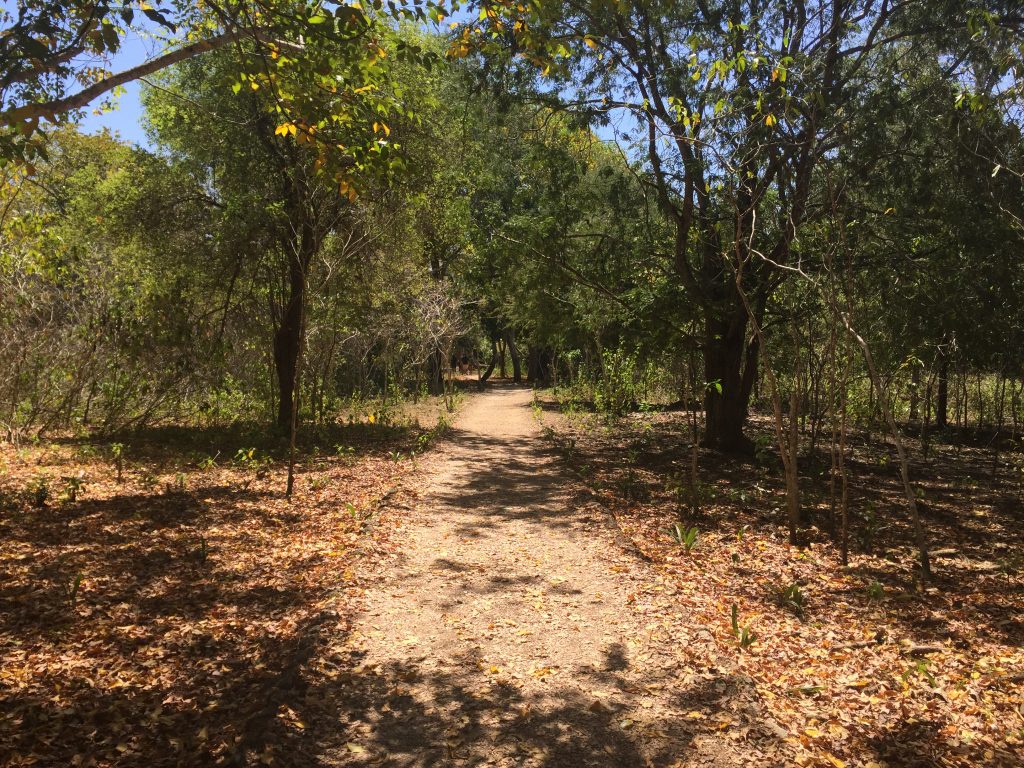 I’ll be completely honest the very thought of just walking around looking for dragons is terrifying but the reality is that it’s not that scary and quite an experience. You’re given assistance by a local guide that comes equipped with knowledge and a forked stick for protection. It seems almost ridiculous to send a ranger out into the forest with a twig for protection but they laugh at my skepticism and assure me they know what they’re doing. 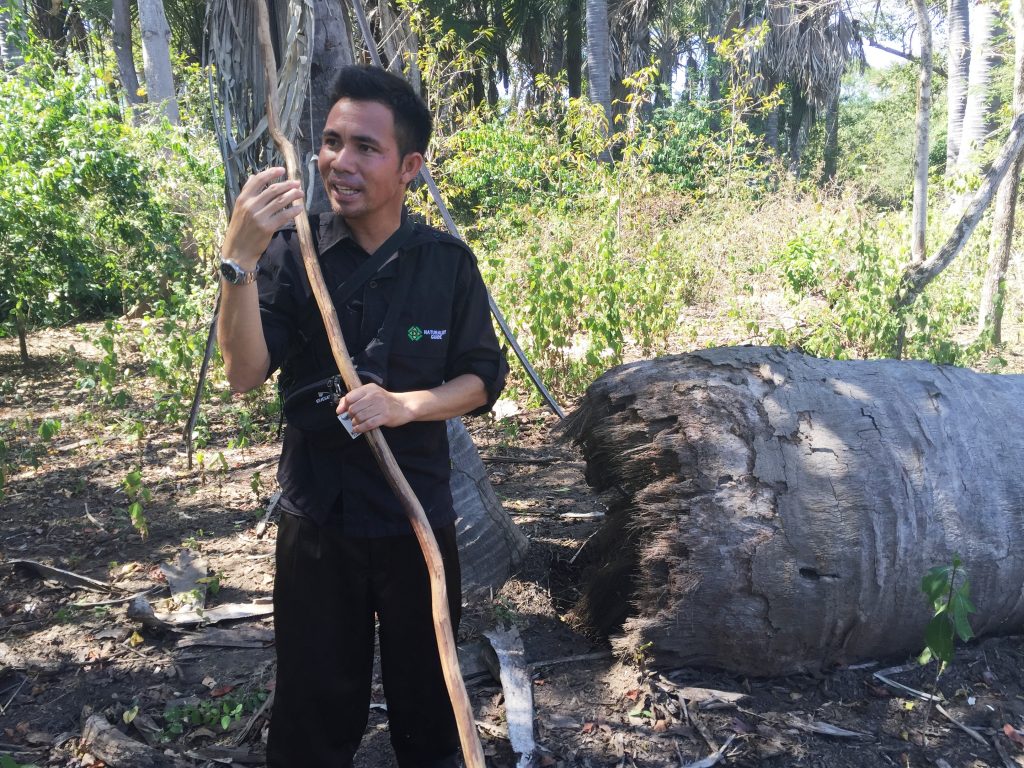 The trail seemed extremely mild compared to what I imaged and while I finally started to relax a bit there was sudden shouting and excitement because one of the rangers had spotted a Komodo. I went racing behind my ranger eager to see a dragon but alas it was a false alarm. Seeming rather dejected narrating the incident to my snapchat viewers I didn’t realise there was a deer lurking behind me and I ended up shrieking so loudly the poor thing ran for his life. Despite the false alarm and my general idioticness with the deer, there was sadly no other sighting as we trudged along finally making it to the picturesque beach. 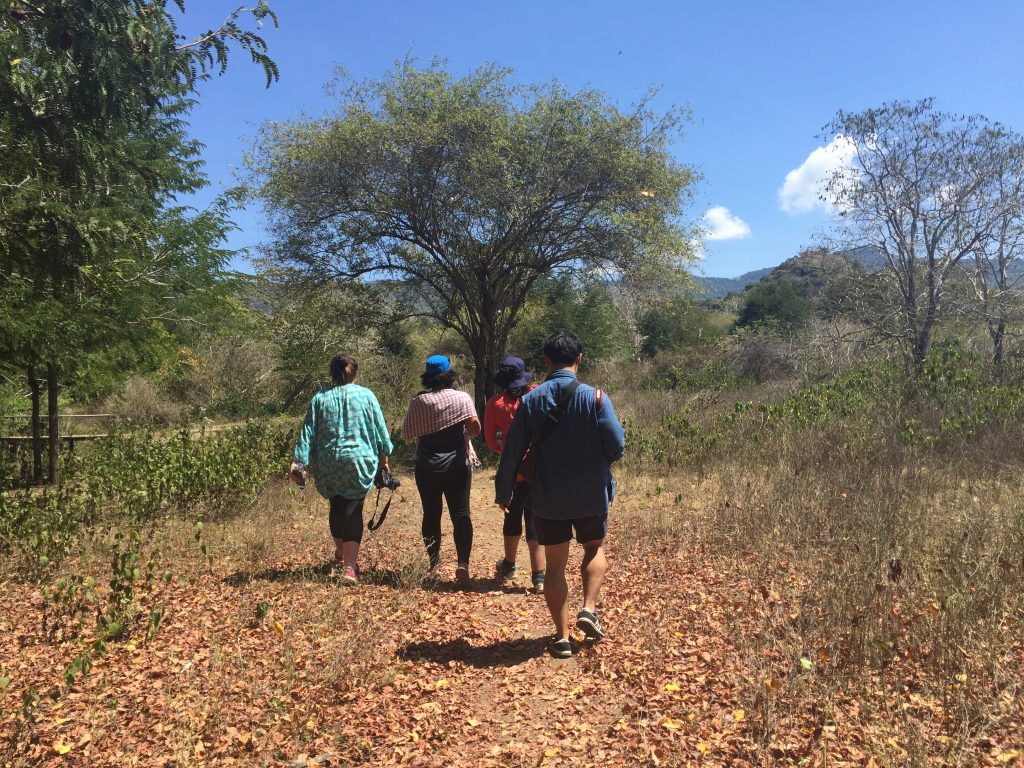 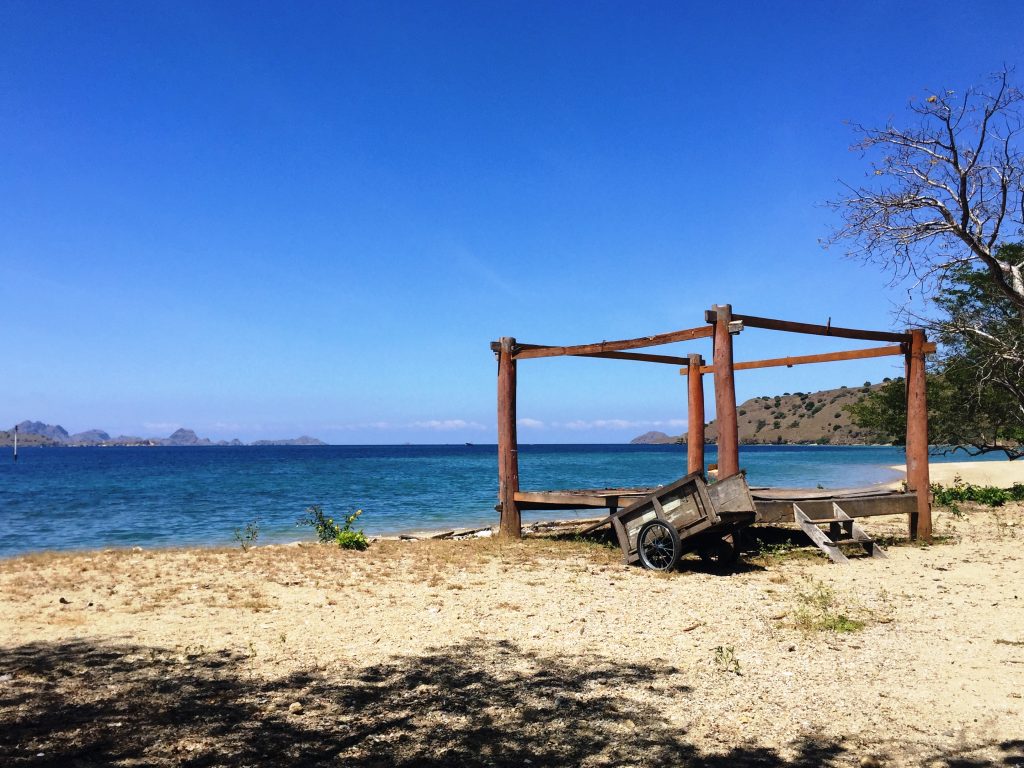 I was caught up taking pictures when my enthusiastic ranger spotted a dragon lazing about. As a whole group of trigger happy travel bloggers ascending to try and capture this massive creature I took my time to really just admire him. It is only when I really saw him up close gazing at us all sprawled out looking like he was about to nap that I realised how incredible these almost pre historic reptiles are. There have been some comparisons made and they say Komodos were originally found in Australia ( I believe some fossils were found ) and then moved to Indonesia but the fact is these creatures could have been extinct but they seem to survive in these harsh temperatures on the islands. I’m not exactly an outdoorsy kind of person and I’m the first one to scream bloody Mary at the sight of a lizard in my bathroom or an insect in my bed but seeing this Komodo Dragon in his natural habitat, in his home, in his element really was quite something. Animals in my opinion shouldn’t be caged and if you really want to see them then go visit where they are most comfortable and I’m really glad I had a chance to go that even with a lizard that’s probably my least favourite. 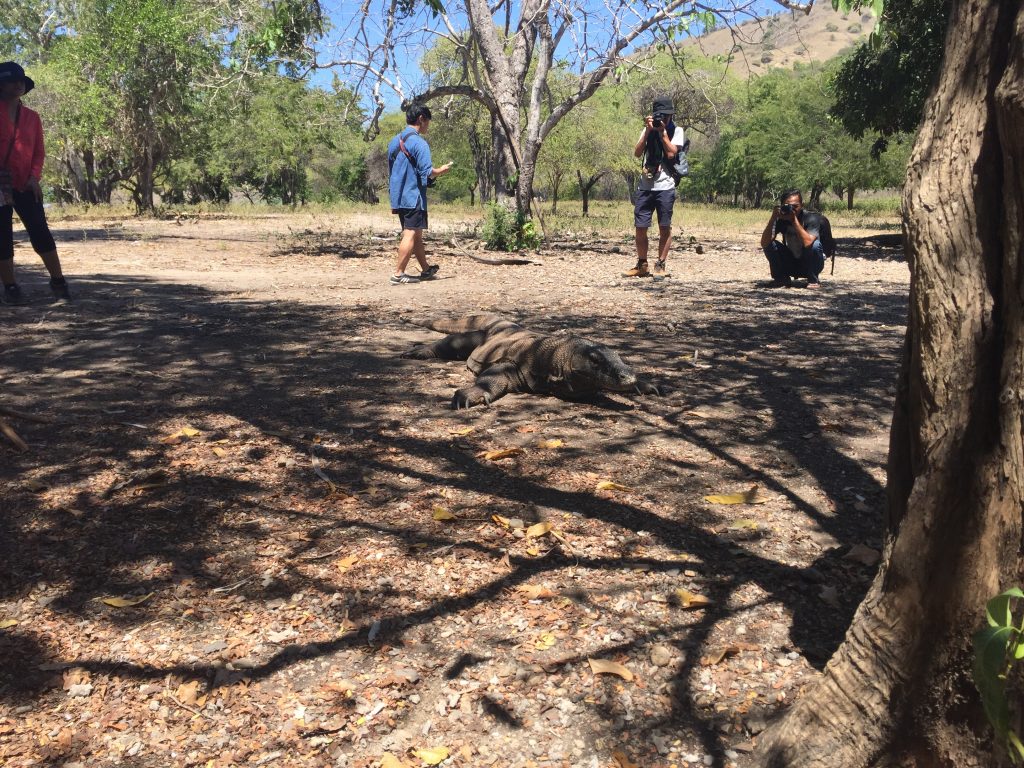 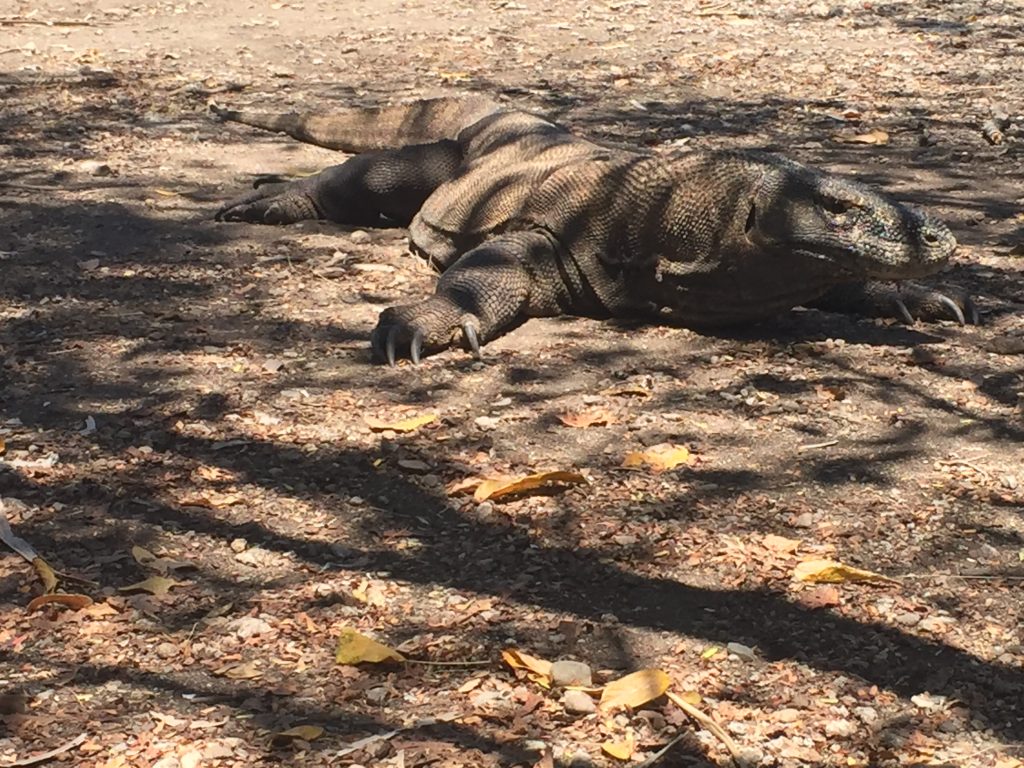 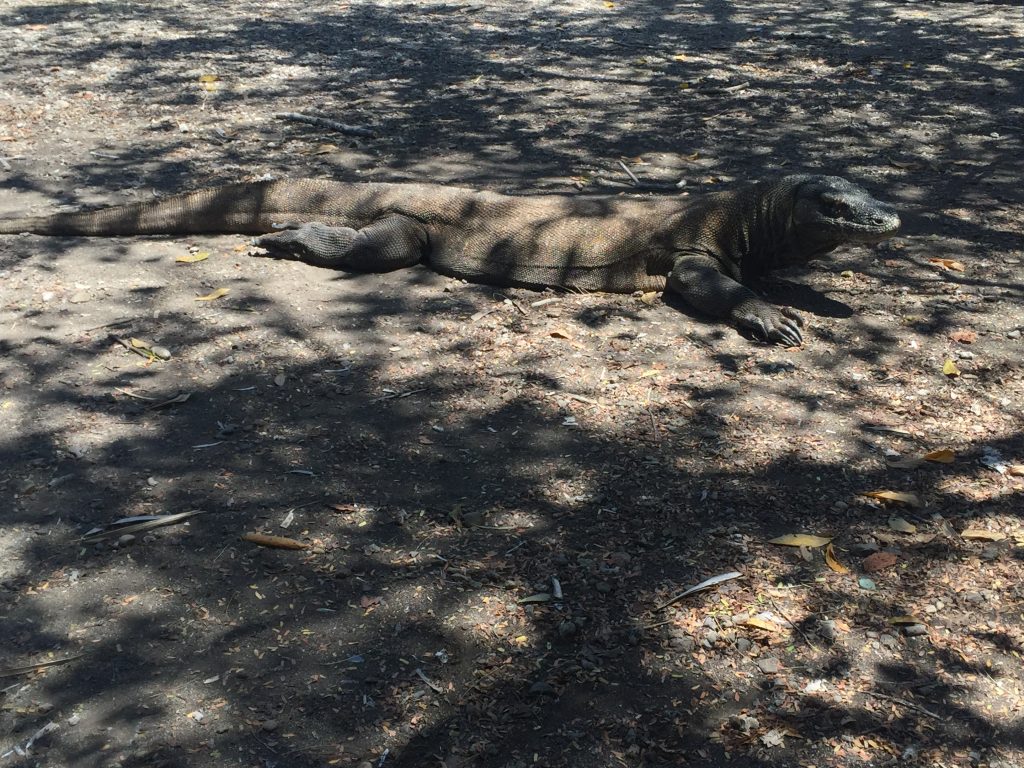 While everyone took pictures posing with the dragon ( the rangers are pros at getting good angles ) I of course embraced my flair for the dramatic and did a series of my varied emotions with my fellow dragons. We spent the afternoon lunching there while these bad boys waddled about the place and after a while you forget being scared and just enjoy them. Till of course they decide to move but unless provoked or you get too close, they’re fairly easy going. 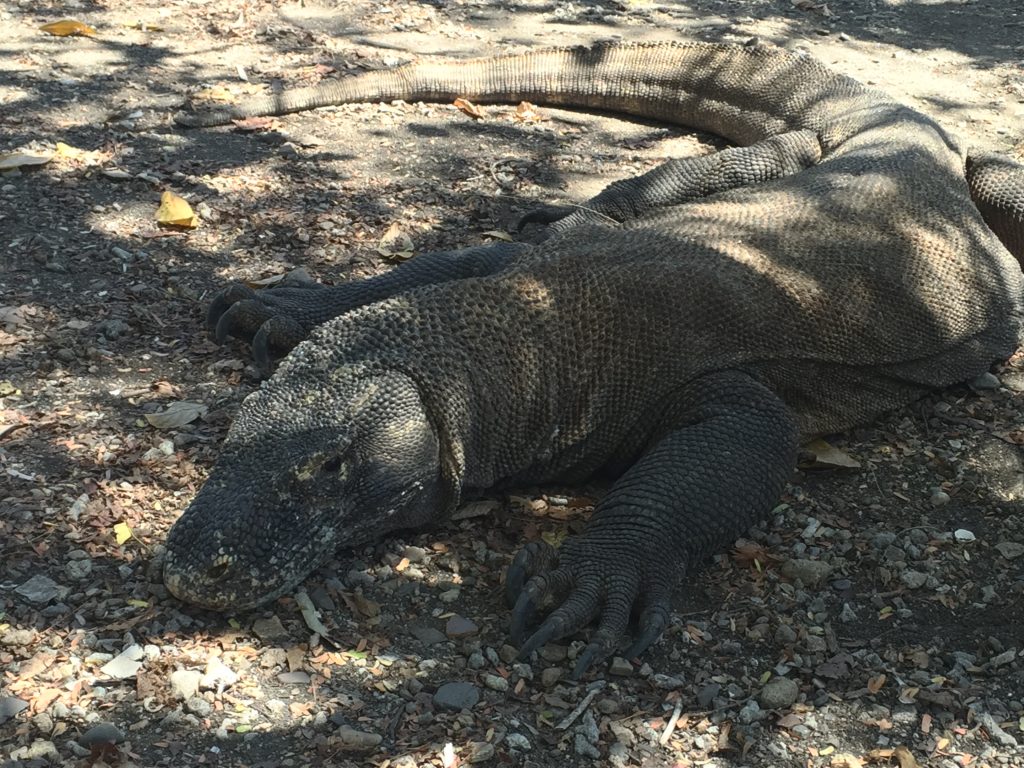 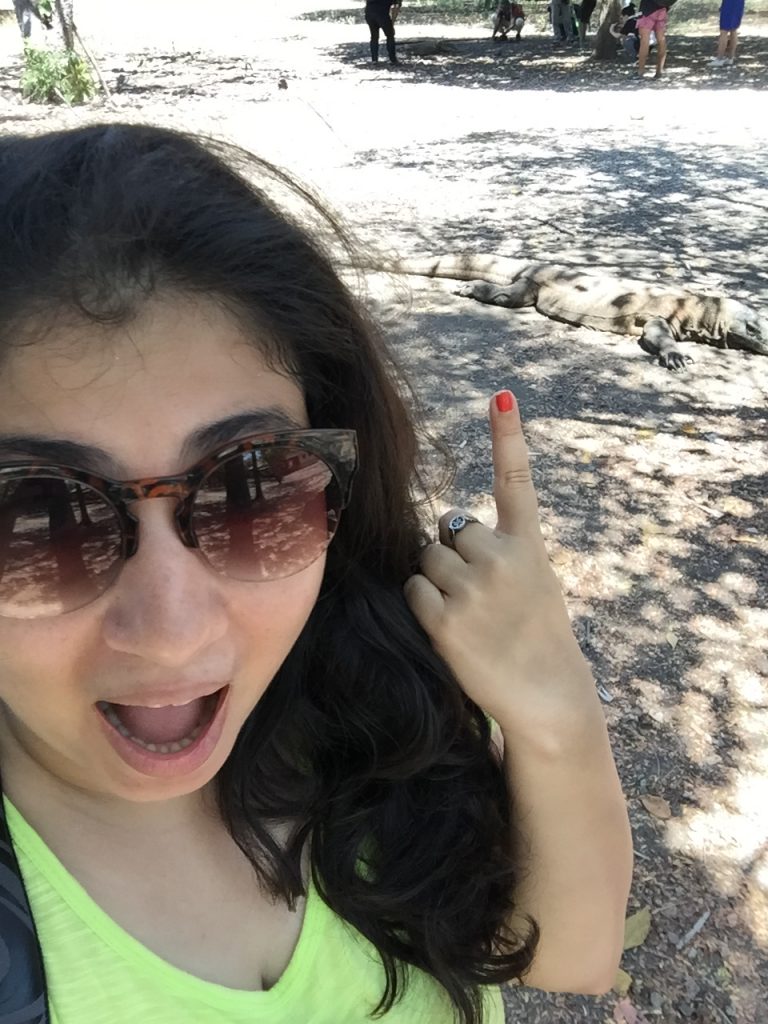 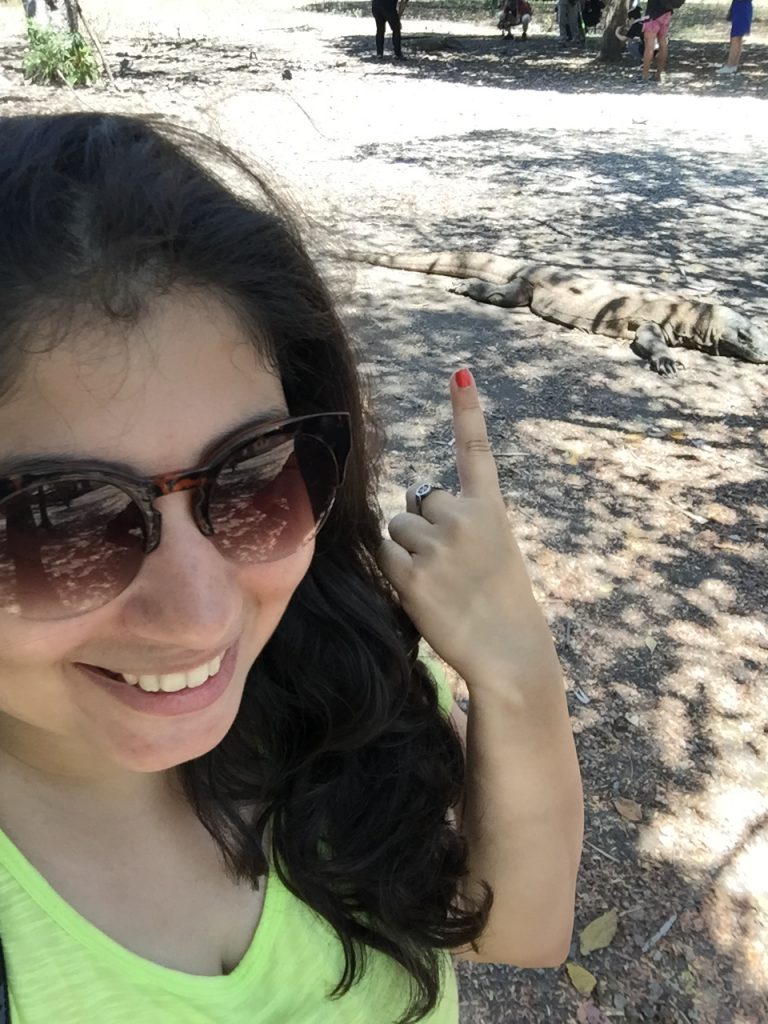 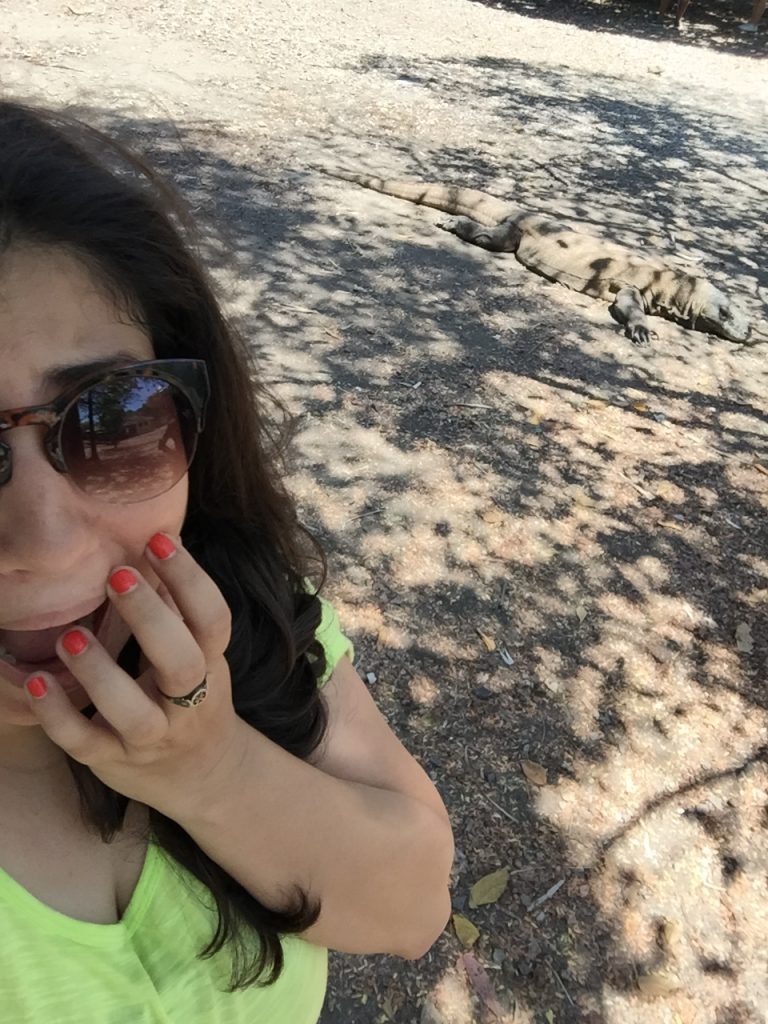 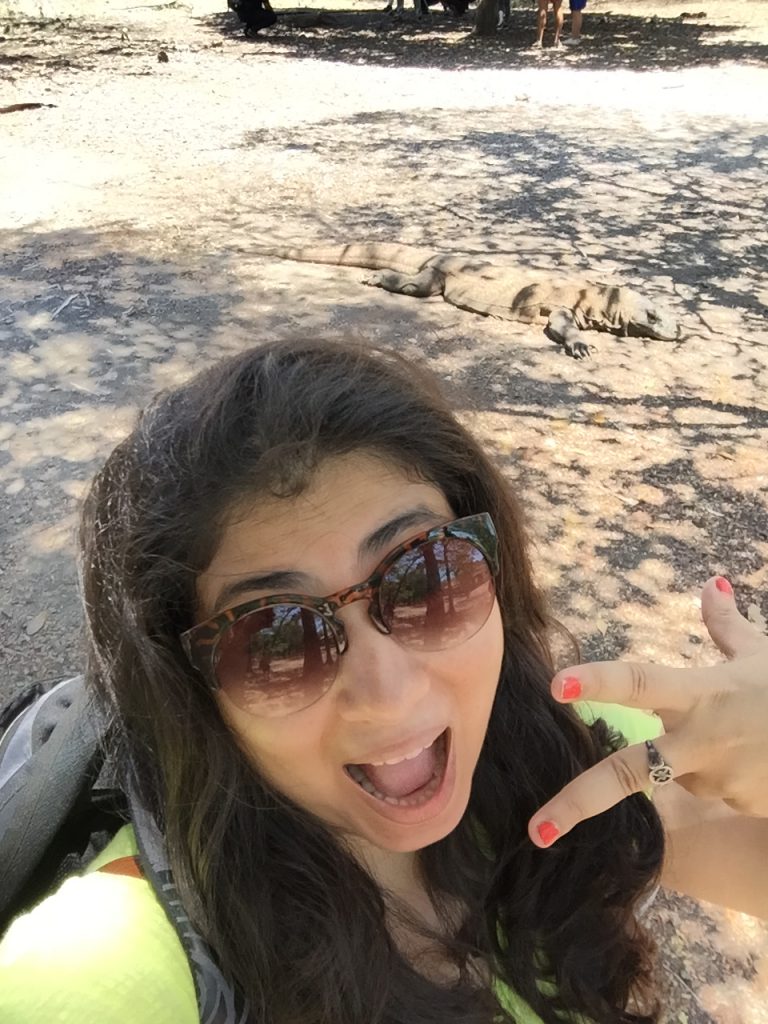 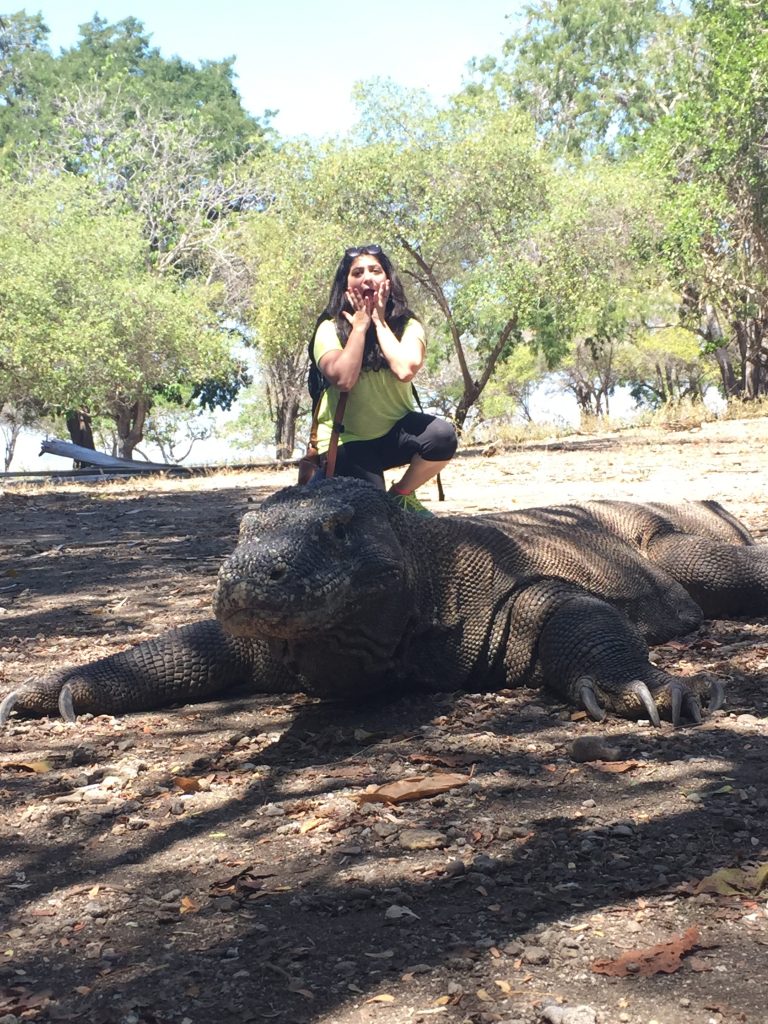 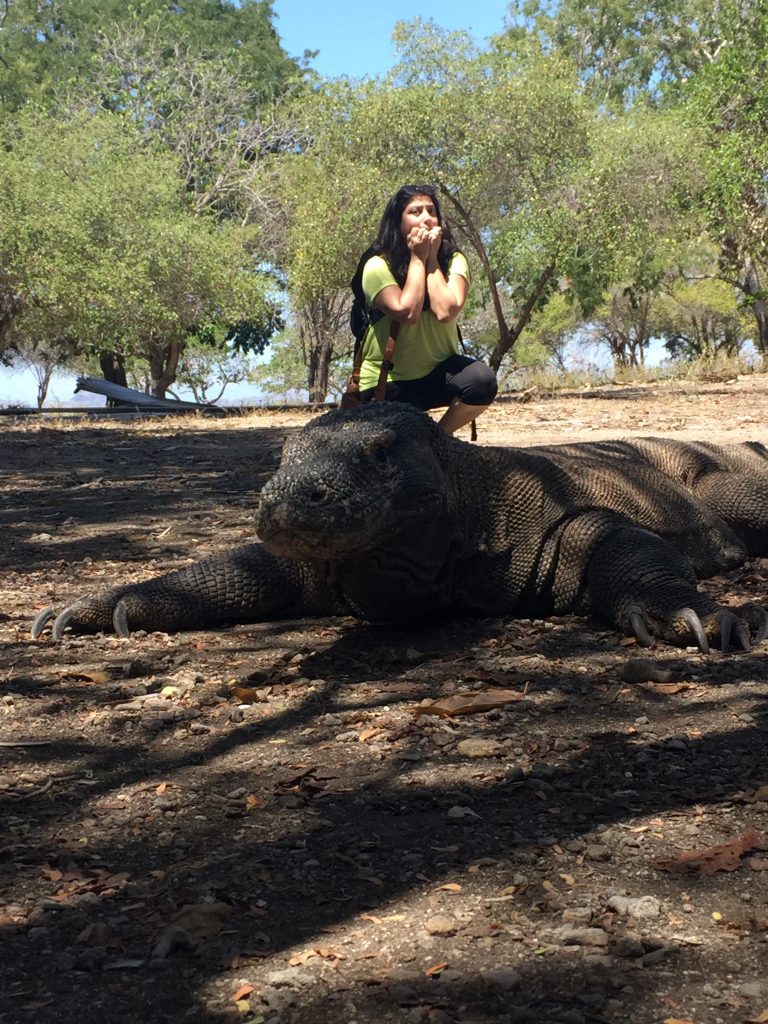 I took many pictures and videos for friends and family back home. Some seemed to think I’m crazy for even going while the others turned green with envy. Some friends even decided to name their dragons – Bruce and Fluffly as they were christened. ( Bruce I get but Fluffly.. I have no explanation at all ). 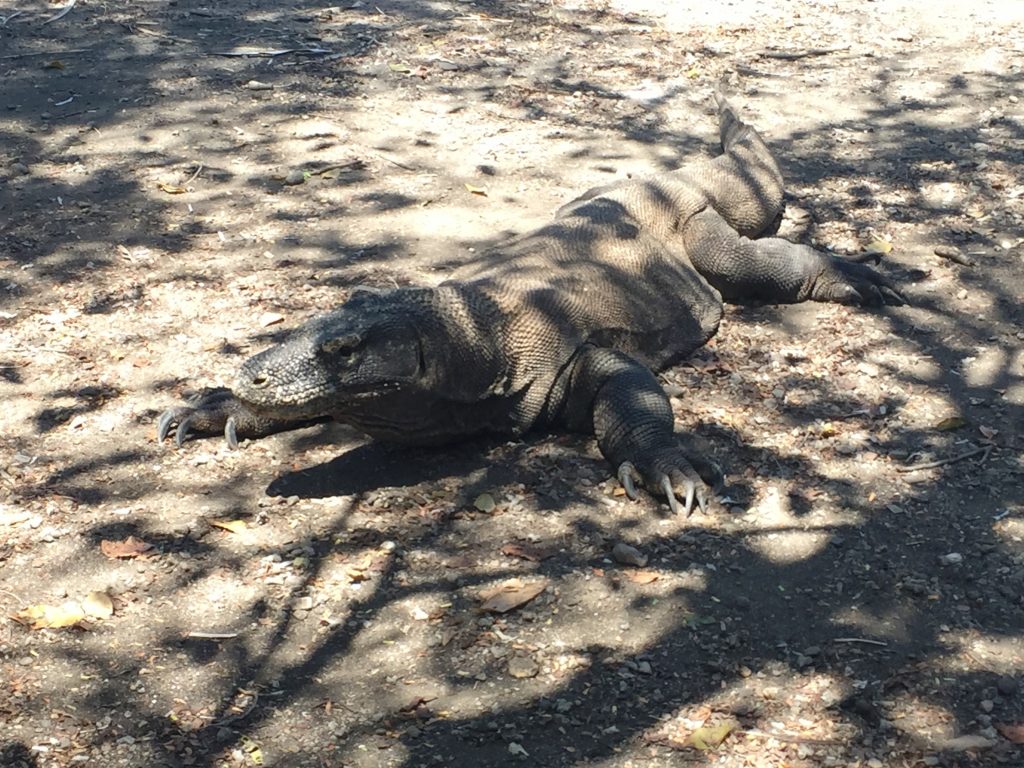 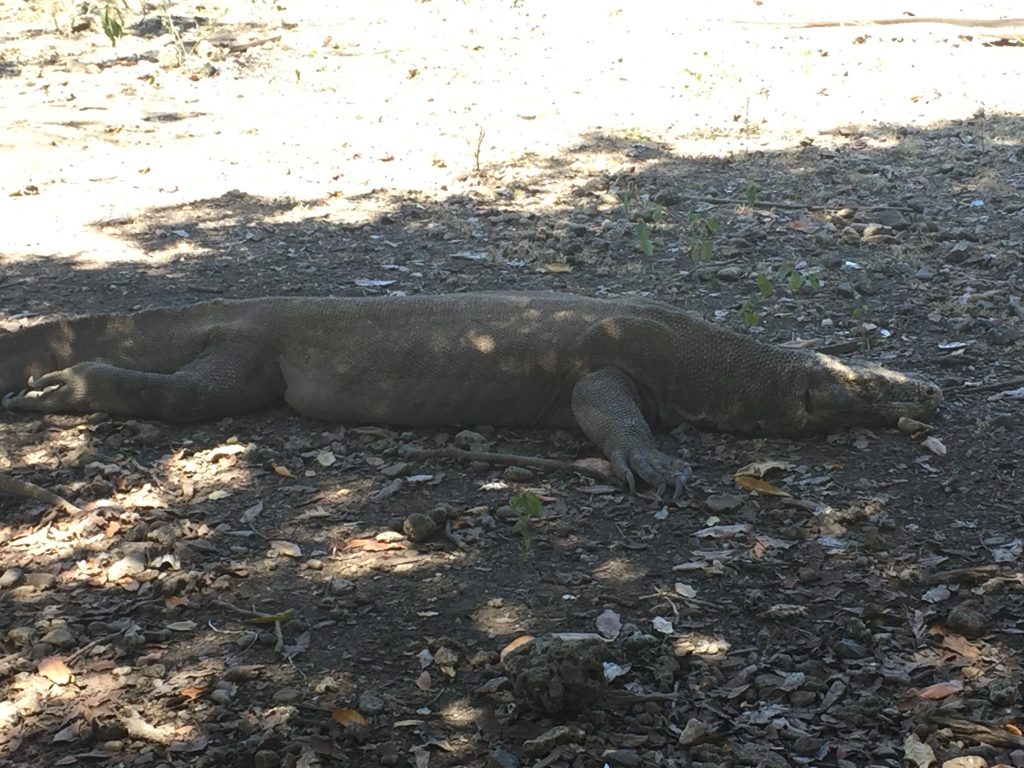 While the highlight here certainly is the Komodo and the trail through the forest, that nearly 2 hour boat ride isn’t just about getting to the island. You can spend a day at sea once you’re done with the Komodos, you and go island hopping and enjoy some gorgeous marine life scuba diving or deep sea diving. You can make a trip to one of the more reclusive beaches like the Pink Beach which is beautiful and have some fun in the sun and enjoy spectacular views of the sun setting from the boat or the beach. The entire experience is just beautiful. 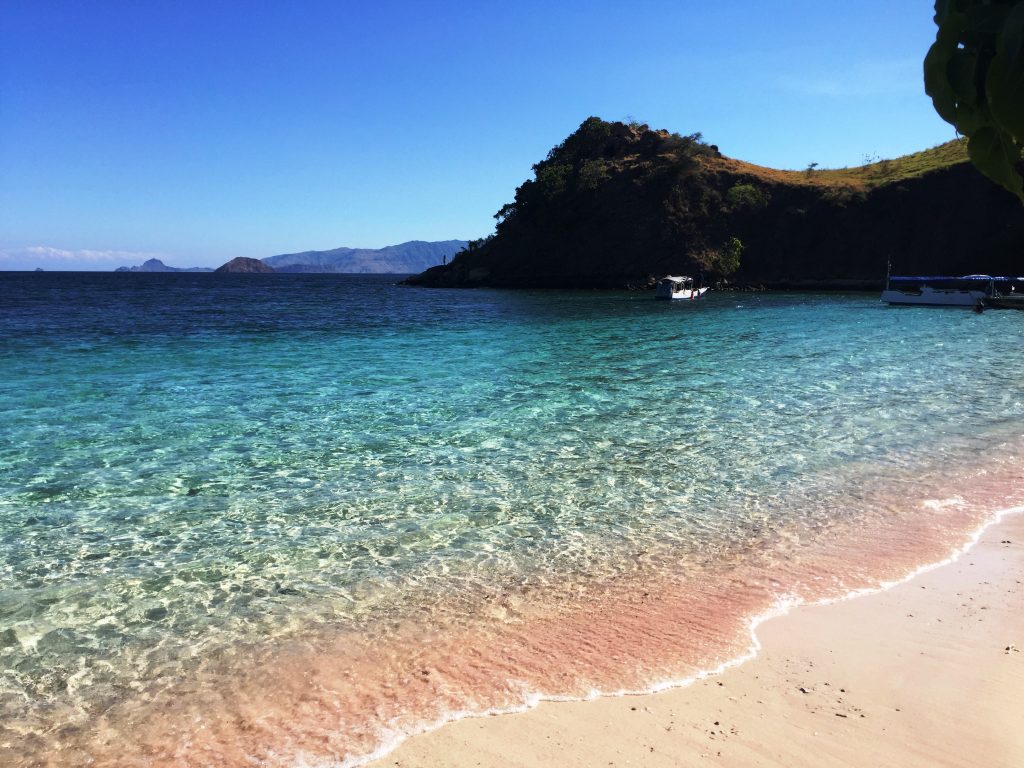 Indonesia has plenty to offer and while every part of my trip was special in its own way, my encounter with the dragons seemed particularly fun. To get to Indonesia is fairly easy and non hassle free.  Jet Airways flies from India to Indonesia. To get to Komodo you need to fly to Labuan Bajo ( flights are usually from Bali ) and then take a boat out to the island.

Disclaimer : This post was done as part of a campaign called #TripOfWonders and I was hosted by the Indonesian Tourism Board. As usual all thoughts, ideas and opinions are my own

I for Israel ! #AtoZChallenge